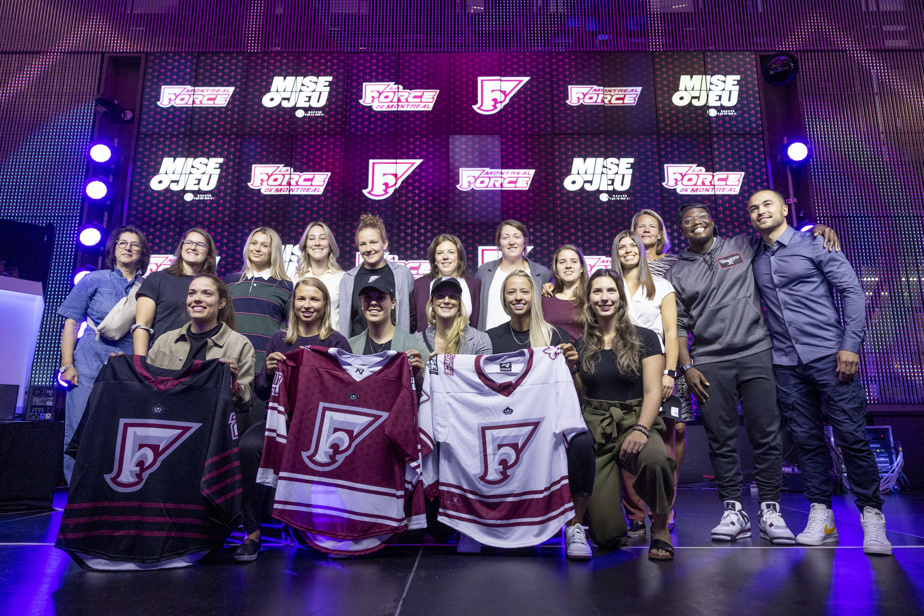 On Tuesday morning, at the Casino de Montréal, the new Montreal team of the Premier Hockey Federation (PHF) was named. The Force is officially born and, even if it will be established in the metropolis, it will play its home games in seven cities of the province.

Kevin Raphaël, team president, Reagan Carey, league commissioner, and Danièle Sauvageau, president and director of 21.02 Sports Center, were present at the launch of a new era in the world of North American women’s hockey.

“We had two months to build a professional team from a blank page,” said Raphaël.

The name was thought of and has a purpose beyond hockey.

“We didn’t want to be an animal, we are not pandas,” Raphaël said jokingly at a press conference. We wanted to make sure we were something intangible that resonated with many people. A force is internal as well as external. “

Our team is a force on the ice and in the community. The name means many things and this is our team.

In addition to unveiling the name, the team president also proudly presented the logo and uniforms of the seventh PHF team. A large “F” will dominate all three kits. At the base of the letter is a half lily to allude to the Quebec nature of the formation. So far, 75% of the players are from the province of Belle.

To remember the Montreal Maroons, one of the first professional hockey teams in Montreal, burgundy is one of the dominant colors of this new franchise. Jade Downie-Landry, Ann-Sophie Bettez and Brigitte Laganière appeared on stage in all three uniforms. One burgundy with white stripes, one black with burgundy stripes and one white with burgundy stripes.

A tour of Quebec

In addition to playing at Center 21.02 in Verdun, the team will play several home games in various Quebec cities. The cities of Gatineau, Quebec, Rimouski, Rivière-du-Loup, Saint-Jérôme and Sept-Îles will all host two Force games.

Of course, the players will travel a lot, but “we are ready to make sacrifices to introduce professional women’s hockey to people from regions that don’t necessarily have the means or the opportunity to come to Montreal,” Bettez said.

This will allow players to promote their sport across the province and this tour will allow fans and players from civic and collegiate leagues to see some of the best players in the world in action.

Furthermore, the interest is not only provincial, it is international, as Raphaël noted. “On July 12, when the project was announced, I received 200 resumes in my inbox. Girls from Finland, Hungary and Sweden, ready to come to Montreal, because they know Montreal is the hub of hockey. ”

Equipped with a payroll, the PHF will allow players to earn a salary, which is new to a lot of Force athletes. Previously, they played voluntarily. Today they can say that they will make a living from hockey and this is what sets this league apart from all the others.

“I was tired of playing professionally and on a voluntary basis. For the first time we have signed professional contracts, ”explained Bettez.

“Finally, professional hockey will not only be played among men,” added Sauvageau.

The Force will make it possible, for example, to bridge the gap between the university ranks and the national team. Before the arrival of the Force, opportunities were very rare and many players were faced with a wall. Now, there is a golden opportunity for these players to continue showing the full extent of their talent while earning a good salary.

Sauvageau provided a vivid example to justify his point of view: “It’s like having the Quebec Major Junior Hockey League and the National Hockey League, but nothing in between. ”

He believes these athletes should be given the opportunity not only to fulfill their dream, but to live off their passion, and that’s what La Force de Montréal will do.

This news thrilled two politicians who showed their satisfaction in their respective press briefings.

First, Montreal Mayor Valérie Plante said she was delighted to see this new franchise in the city. “I wish our athletes the best of luck as they represent us in North America’s only professional women’s hockey league. ”

Then, the minister responsible for the condition of women, Isabelle Charest, stressed that “this is excellent news for women’s hockey. The creation of this team is in line with the efforts made by the CAQ government over the past four years to develop the sport. This is a first step for female players in Quebec to have the opportunity to show off and be regarded in the same way as their male counterparts. ”