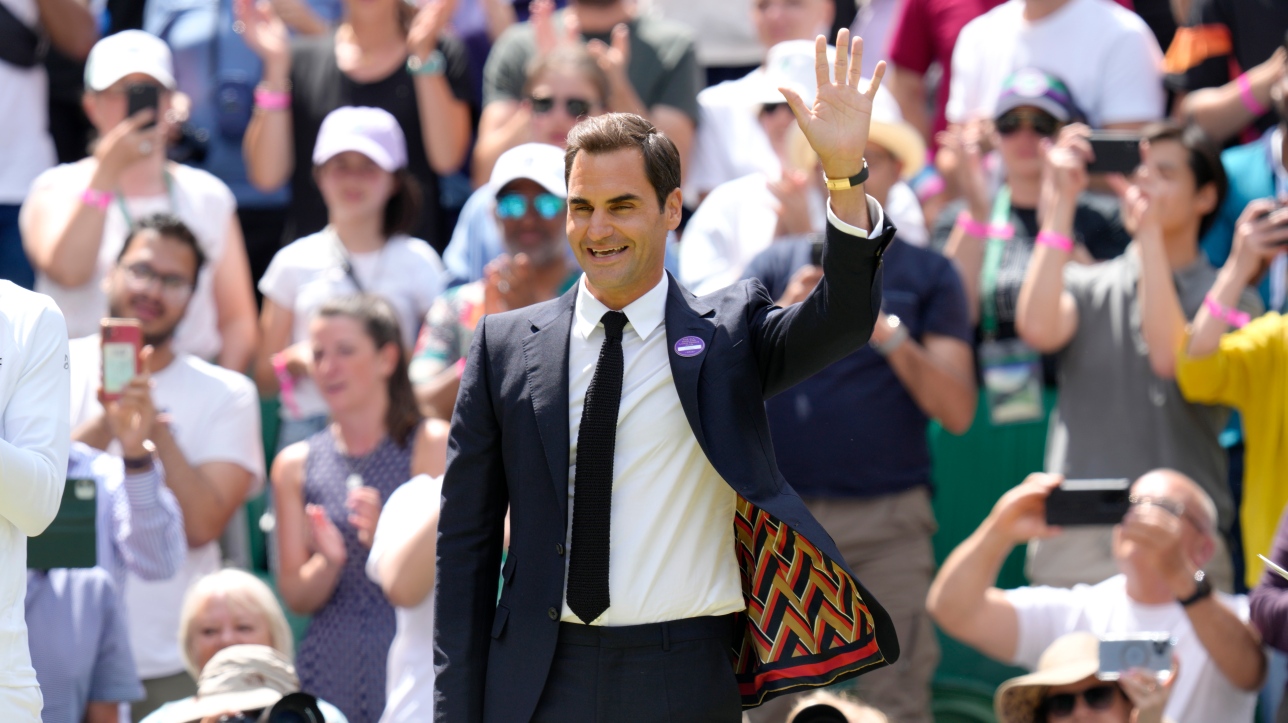 WIMBLEDON, UK – Roger Federer returned to Wimbledon this year, despite everything – not as a participant, of course, but to take part in the centennial of center court on Sunday – and reiterated his willingness to attempt a return to competition in 2023.

“I was just trying to be successful here and represent my sport well. I hope that’s what I did, ”said Federer, who has set a men’s record with eight of his 20 career Grand Slam titles at the All England Club, and received a standing ovation from spectators for the occasion.

Instead of donning the legendary mandatory white suit, the Swiss wore a dark suit and tie, with his Wimbledon membership number pinned to the lapel of his jacket. Federer, who will turn 41 on August 8, has been out for a year with knee problems.

He was one of about 20 former main grass tournament champions who marched on Center Court in a 35-minute ceremony on the court opened in 1922.

“I was lucky to have been able to play so many games on this field. It’s strange to be here today in a different role, said Federer, who has played in the tournament every year since he entered the main draw in 1999. But it’s good to be here … with all these champions. This field has given me my biggest wins and my biggest losses. “

He played his last game on July 7, 2021, a 6-3, 7-6 (4), 6-0 defeat at Center Court to Hubert Hurkacz in the quarter-finals. Soon after, Federer went under the knife to repair the meniscus and cartilage in his right knee, his third operation in just 18 months.

Federer previously indicated that he intends to return to competition at the Swiss indoor tournament in October.

“I miss being here. I would have liked to participate in it (the tournament). I knew when I left the field here last year that the following year would be difficult. I didn’t think it would take that long to return to competitions. But my knee has given me a lot of trouble, he told the crowd. I didn’t know if I should have made the journey here, but I’m happy to be here in front of you right now. “

Among the former champions still in the running for the precious trophy this year Novak Djokovic, Rafael Nadal and Simona Halep in the single, as well as Venus Williams in the mixed doubles.

Djokovic, the career six Wimbledon title holder who was supposed to perform at Center Court in the fourth round later on Sunday, joked during his turn at the microphone: “Sweet Jesus, I’m only even more nervous when I play.

Among the notable absences are three of the most successful players in the history of the tournament: Martina Navratilova (who tested positive for COVID-19 and declared Twitter to be “saddened” to have to miss this event), Serena Williams and Pete Sampras. Navratilova’s nine Wimbledon titles are a record; Williams, who lost in the first round last week, and Sampras, who hung the racket in 2002, have each won seven times.