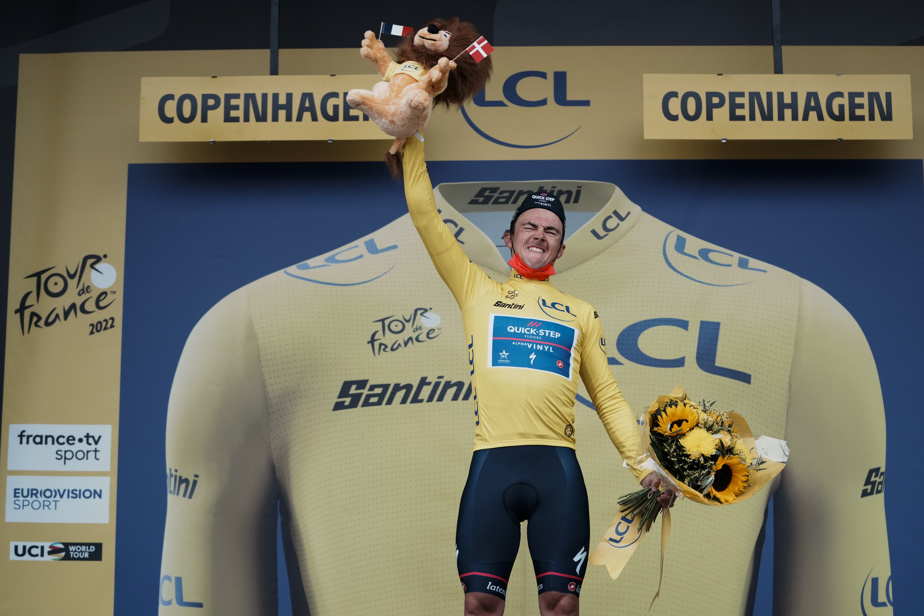 (Copenhagen) Copenhagen is the city par excellence for cyclists and pedestrians. Each has its own path, well defined and identified. Cars ? They wait without hesitation, respecting their traffic corridor.

But there are not only benefits to all these blue and white paint marks on the roads. All cyclists know it: when it rains, it slips. “Like a bar of soap,” noted Swiss favorite Stefan Bissegger (EF), who fell twice on the ground during the opening time trial of the Tour de France on Friday afternoon.

In these difficult conditions – and in front of an impressive Danish audience – the Belgian Yves Lampaert (Quick-Step) surprised all the contenders who started before him, starting with his compatriot Wout Van Aert (Jumbo), who occupied the first position. a long time.

“I beat the great Van Aert! “Launched an incredulous and tearful Lampaert after the finish. “For me it’s incredible, I never thought I’d wear the yellow jersey. My head is exploding! ”

Using a drier surface, Lampaert, the son of a 31-year-old farmer, beat Van Aert by five seconds. He covered the circuit and its twenty corners at an average speed of 51.8 km / h. The double national champion of the specialty played an excellent second part of the course.

I expected to finish in the top 10. That would have been very good. In the end I beat all the best.

Hugo Houle welcomed the stroke of force of the Belgian, recognized for his qualities in the spring classics: “Impressive, Lampaert. I think he surprised a lot of people today. I do. He’s a great runner, but to say he would beat all these guys … The leaders were a bit trapped [par la météo]. If they had started last, it would have changed the game. ”

Speechless in the leader’s chair, Van Aert was aiming for a third consecutive victory in the Tour de France. Last year he had won the last time trial and the final sprint on the Champs-Élysées.

“I’m disappointed, of course, he reacted. It is frustrating, but with the bonuses it is possible to take the yellow jersey in the next few days. There was a chance today. It’s a shame ! ”

The other big news of the day is the third place of Tadej Pogačar, the 23-year-old Slovenian who is aiming for the third consecutive title. He not only beat world champion Filippo Ganna (Ineos), who ended up with a slow puncture, but sent a message to all the other rivals in the overall standings.

“I feel confident, satisfied, even if it was tense and stressful for me,” assured the leader of the United Arab Emirates. “It remains one of my best starts on the Tour.”

His two expected opponents from Jumbo-Visma were alike. Dane Jonas Vingegaard (7And) and the Slovenian Primož Roglič (8And) came 8 and 9 seconds behind Pogačar respectively. It was therefore not Friday that the leaders of the Dutch formation would have established the hierarchy, a subject that promises to be potentially delicate.

Britain’s Adam Yates (Ineos) did a great deal and slipped into 13th placeAnd place, 16 seconds behind “Pogi”. His teammates Geraint Thomas (18And) and Dani Martinez (33And) ended up a little further on. Here, too, priorities remain to be defined.

Frenchman David Gaudu, Antoine Duchesne’s teammate at Groupama-FDJ, saved the day by giving less than a minute to the leader.

The biggest notable underdog is Australian Ben O’Connor (AG2R), fourth on the Tour in 2021, who is already nearly a minute behind Pogačar.

Table ready for the second stage, this Saturday, where Van Aert will try to steal the yellow from Lampaert. All attention will be on the 18km long Great Belt double bridge connecting the islands of Zealand and Funen. The finish line is 3 km after the end of the bridge. The 50km approach promises to be very nervous, especially if the offshore wind picks up.

For the hardware enthusiast, Bissegger has created a large 64-tooth chainring. Obviously, this didn’t help him. EF’s young Swiss dropped to 99And rank after his two falls. “On the track, they put bigger and bigger gears, observed Hugo Houle. Me, I had a 60. “Chris Froome, who finished with an anonymous 112And place, continue pedaling with a very pronounced egg-shaped crown.