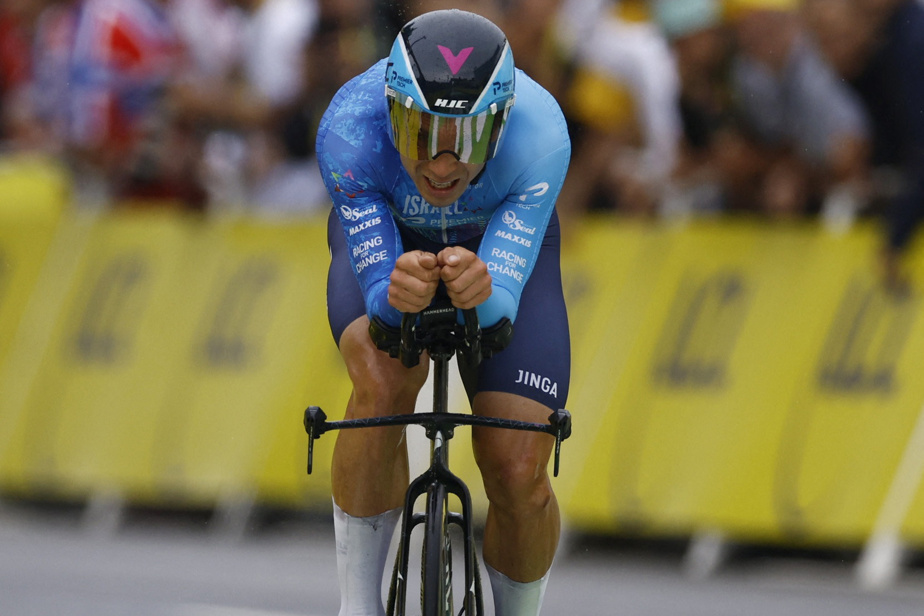 (Copenhagen) The Quebecers played “extreme” caution during the opening time trial of the Tour de France, held mostly in the pouring rain, Friday afternoon in Copenhagen.

Third to start, Guillaume Boivin had to deal with a further difficulty: he was not riding his time trial bike. The Israel-Premier Tech cyclist had to borrow a teammate’s mount because he hadn’t received his suitcase and three bikes after arriving in Denmark on Wednesday.

“I have the impression that I will have them after the Tour because we are starting from here in two days, the athlete from Longueuil infuriated after his effort. We are used to Air Canada. It happened to me twice in a week. Thanks to Air Can … ”

Called at the last minute after the withdrawal of a teammate potentially infected with COVID-19, Boivin made a Montreal-Toronto-Copenhagen trip from Wednesday to Thursday. He was returning from Edmonton where he took second place at the Canadian Championships in Edmonton on Sunday.

Under these circumstances, he was happy to start his second Tour with “a short day”. He recorded the 129And time, finishing 1 minute and 26 seconds behind surprise winner Yves Lampaert (Quick-Step).

“I pushed hard, but I didn’t take any risks when cornering. You really had to be focused, especially in the rain. It is very slippery when cornering because there is paint. I had nothing to gain, so I was extremely careful. ”

After he resigned, he told his athletic director, Zak Dempster, that he had heard absolutely nothing of his instructions in the headphones. The thousands of spectators crowded against the fences of the entire 13.2km circuit were too noisy.

Hugo Houle, who followed his friend’s run from the back of the car, managed to scour the route one last time. However, he struggled to find his way to him through this human tunnel, where every curve felt like the last.

The former Canadian champion of the specialty very well, finishing 40thAnd 47 seconds behind the winner, thanks to a solid second leg (31And time).

“It went well, the power was good, but I ran confidently through the corners. I wasn’t going to play with the best, so I didn’t see the point of risking anything today. But the sensations are excellent. I’m happy. Otherwise the atmosphere was truly amazing. ”

Houle, who didn’t put any energy into the time trial this year, was Israel-Premier Tech’s best. Despite the drier conditions at the end of the race, his Danish friend Jakob Fuglsang had to settle for 64And degree (+ 55s).

With no ambitions on this event, Antoine Duchesne (Groupama-FDJ) showed caution in the corners. However, he found further motivation at the end of the race when his manager whispered in his ear that he had a four-second lead over his roommate Thibaut Pinot. The Chicoutimi native added three more to the finish finishing 105And (+ 1 min 14 s).

“It was great, a time trial in town like that, Duchesne thrilled. There were people everywhere, not a free inch. It was crazy. People all the way. You find yourself involved in the game, you want to drive at full throttle, you are a little euphoric, with adrenaline. It changes the times we sometimes do in the potato fields when it’s gray in winter … ”

After a thorough warm-up, Israel-Premier Tech’s third Canadian Michael Woods rode to the finish, finishing 134th.And a minute and a half from Lampaert. The 35-year-old from Ontario didn’t deign to untie his legs on the exercise bike after his performance.

“I didn’t go all out because of the corners,” he explained. It was really dangerous. I saw it [Stefan] Bissegger had crashed twice, so I didn’t take any chances. My goal is just to finish the first week without crashing. This is what I got today. ”

Woods was however able to measure the power of his legs. “I rode well, I’m strong, I think I’m ready for the next three weeks. ”

The Tour starts well, it remains to reunite a reassembled rider with his bikes and his suitcase. Meanwhile, the Israel-Premier Tech press officer went to buy her some clothes …