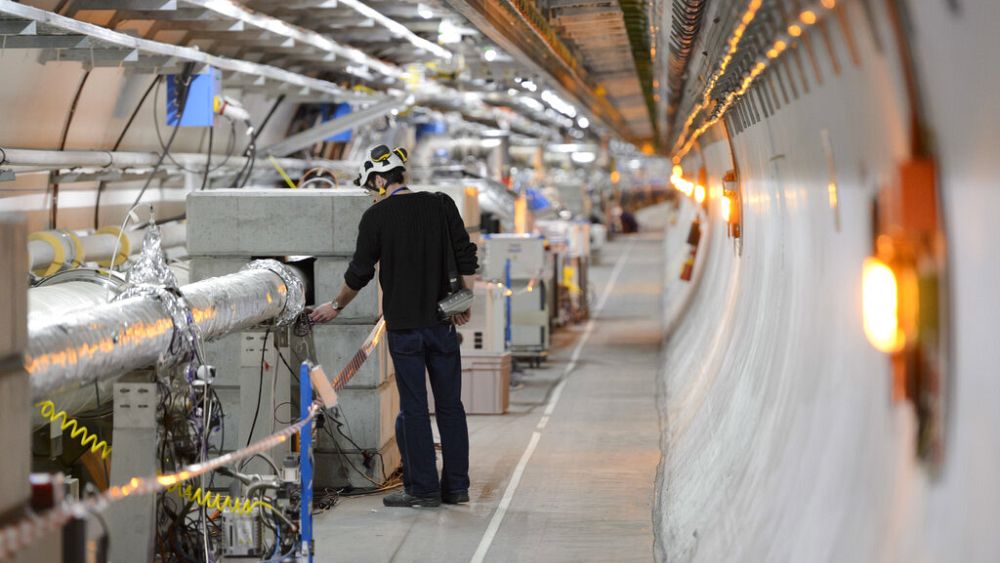 Ten years after its discovery of the Higgs boson, CERN’s LHC, the largest and most powerful particle accelerator in the world, will set off again on Tuesday with record collision energy. The target. the goal? Pierce the secrets of the material a little deeper.

The Large Hadron Collider (LHC) was restarted in April, after a three-year technical shutdown, for maintenance work and to improve its production and particle detection.

It will operate at its full collision power of 13.6 trillion electron volts (TeV) for four years, officials from the European Organization for Nuclear Research (CERN) announced at a press conference last week.

The detectors of various experiments (in particular ATLAS, CMS, ALICE and LHCb), will then record the collisions of protons, which produce ephemeral particles that explain the functioning of matter.

“We aim for a rate of 1.6 billion proton-proton collisions per second for the ATLAS and CMS experiments“said Mike Lamont, director of accelerators and technology at CERN, on Thursday.

The more violent these collisions, the more they allow “break“particles to identify their components and their interactions.

The proton beams will be concentrated to reach a microscopic dimension of “10 microns, to increase the collision rateof protons, explained Mike Lamont.

The world temple of the infinitely small, built in 2008, led to the discovery of the Higgs boson, announced exactly ten years ago by Fabiola Gianotti, then coordinator of the ATLAS experiment and now Director General of CERN.

“The Higgs boson is related to some of the deeper issues in fundamental physics, from the structure and shape of the Universe to how other particles organize themselves.“, According to the researcher.

Its discovery revolutionized physics, confirming the prediction of researchers who had made it, almost 50 years earlier, a centerpiece of the Standard Model of particle physics (SM). The Higgs boson is the manifestation of a field, that is a space, which gives mass to the elementary particles that form matter.

The researchers were able to find it thanks to the analysis of about 1.2 billion billion proton collisions between them. The third LHC race that opens on Tuesday will multiply that figure by twenty. “This is a significant increase that paves the way for new discoveries,” notes Mike Lamont.

Because the Higgs boson has not revealed all its secrets. Starting with his nature. “Is it a fundamental or a composite particle?“, that is a set of different still unknown particles, asks Joachim Mnich, Director of Research and Informatics at CERN. Better,”is it the only existing Higgs particle or are there others?“

Past experiments have made it possible to determine the mass of the Higgs boson and also to discover more than 60 composite particles predicted by the Standard Model, such as the tetraquark.

But as Gian Giudice, head of the theoretical physics department at CERN reminds us, “particles are just the manifestation of a phenomenon“, instead “the goal of particle physics is to understand the fundamental principles of nature“Like the nature of hypothetical dark matter or dark energy no less mysterious.

Nine experiments will thus exploit the production of particles from the accelerator. Like ALICE, who studies the primordial plasma of matter that prevailed in the first ten microseconds after the Big Bang. Or LHCf, which simulates cosmic rays.

The next phase of the great collider will come after the third hiatus, in 2029, with its transition to “high brightness“, which will multiply the number of detectable events by ten.

In addition, the CERN researchers are looking at the Future Circular Collider (FCC) project, a 100 km ring whose feasibility study is scheduled for the end of 2025 “.It will be the ultimate machine for studying the Higgs boson, which is a very powerful tool for understanding fundamental physics.“, Concluded Fabiola Gianotti.