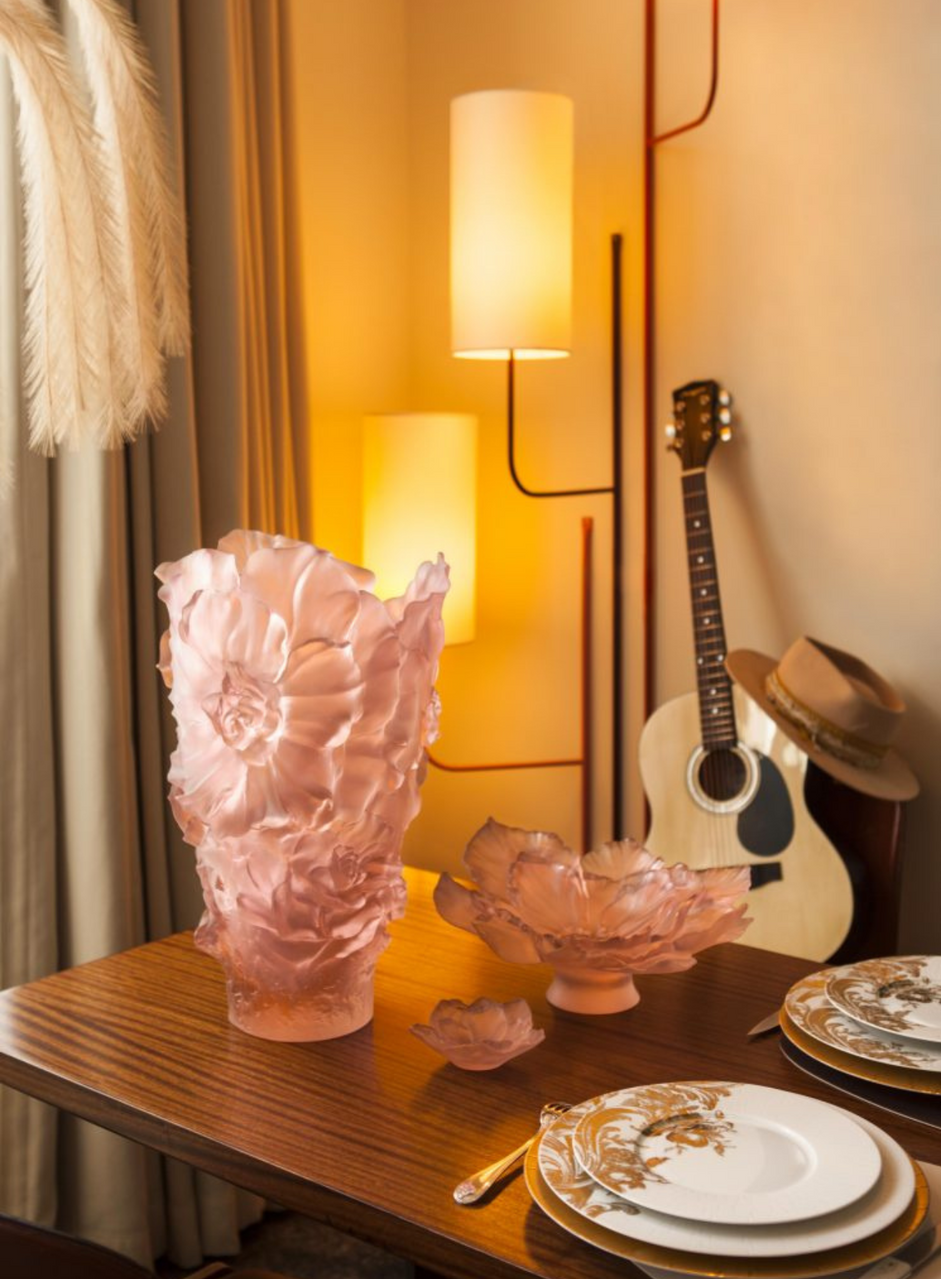 The Daum house recently presented a stand closely tied to its time at the Salone del Mobile in Milan.

Daum: from brand heritage to technology.

The Daum manufactory, which celebrated its 140th anniversary in 2018, continues to demonstrate its timelessness in both its creations and innovations and hosted the latest Salone del Mobile in Milan – a key design fair in Europe – by focusing on on QR codes and augmented reality.

As soon as you entered the stand, an immersive invitation allowed you to discover the Végétale table, a key piece of the Architecture catalog, down to the smallest details of its steel structure covered with amber or gray crystal panels. Using touch technology, the crystal factory invited the public to discover this creation in life size or adapted within it, resulting in a concrete projection.

In fact, thanks to a QR code, the mirror can be positioned in a chosen space such as a bathroom, an entrance or even in a bedroom. The new technology has offered customers the ability to imagine the art studio piece right at home and interior designers and decorators to integrate this 3.0 system into all of their projects. The Daum house has highlighted this tool on other decorative pieces of different sizes, including several majestic objects such as the Coral Sea or the Camellia vases.

The manufactory has also integrated QR codes on the easels, thus allowing visitors to get as much information as possible about the artist, the work and the work. Linked to the website of the glassware and to the product page of the piece, these tools are intended to provide information relating to the storytelling of the creation, its size, its availability and its price.

Daum, a DNA rooted in innovation.

Throughout its history, Daum glassware has always been a forerunner of artistic trends but also of its technology. The evolution of techniques since the creation of the house has continued to develop. When Jean Daum bought the small glassworks in eastern France specializing in watch faces in 1842, he was far from imagining the real signature that would become his name.

Already in Art Nouveau, Daum was synonymous with extraordinary acid engraving techniques. Subsequently, the manufacture created the Nancy School which began with the opening of the first artistic workshop in 1891, the cradle of exchanges between artisans and artists such as Majorelle or Bergé. Then, the various prices of the Universal Expositions such as in 1900, the transition from glass to crystal thanks to the Paquebot Normandy and finally the adoption of glass paste techniques for crystal conceived in 1900 by Almeric Walter indisputably demonstrated the technological progress of the crystal factory and have placed Daum at the forefront of these changes. The glassware was particularly noted in 1968 by making its first pieces in crystal paste with the artist Salvador Dalì.

Daum has been able to reinvent itself to remain one of the best names in French craftsmanship. After more than 140 years, the house, still firmly rooted in this constantly evolving world, continues to combine history and innovation.