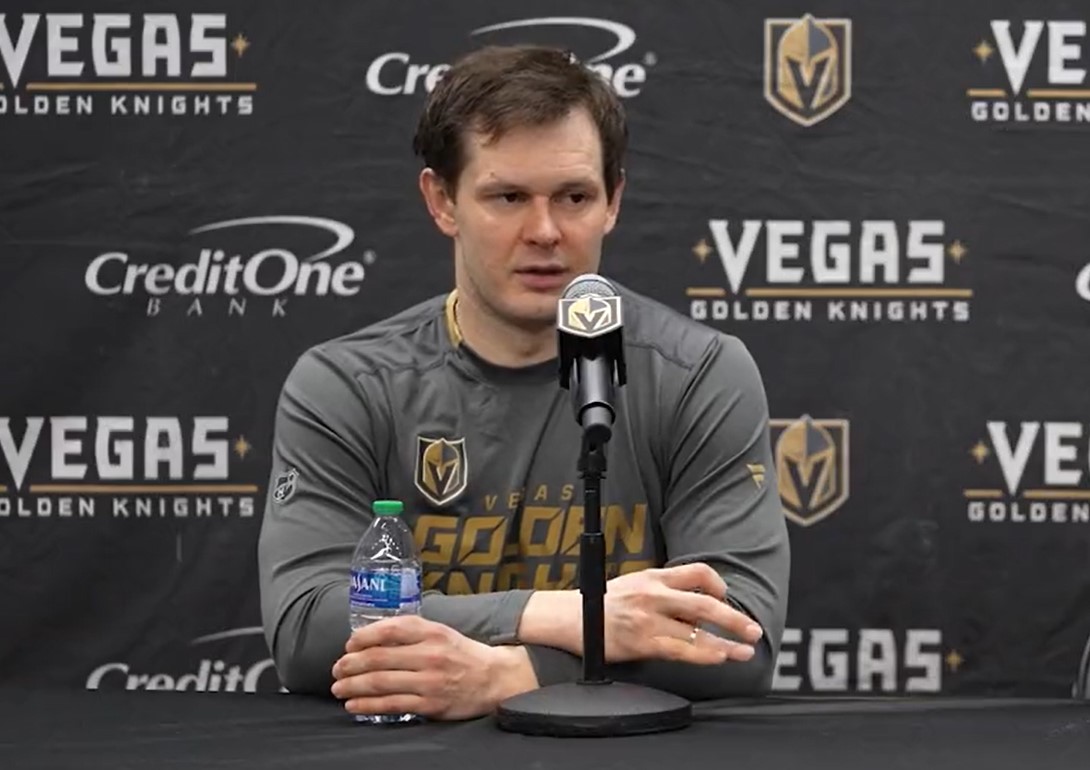 Having made his first difficult transaction since taking office, Kent Hughes meets with the media. And let’s say that unlike Marc Bergevin, he gave a lot of information.

Dadonov in Montreal for a while.

First, the plan is not to exchange Evgenii Dadonov over the summer. The Russian is therefore expected to play for the Canadian next season, unless there is an irresistible offer.

“The plan is for Dadonov to play for us next season.”
– K. Hughes

As I wrote earlier, the dream scenario would be to see Dadonov have a good first half of the season and be able to trade him at the next trading deadline. At the limit, the Canadian will even be able to withhold part of his salary. It doesn’t matter, considering that Dadonov is still in the last year of his contract.

Hughes has no plans to trade Anderson, but you never know …

However, Dadonov’s arrival in Montreal (considering he should stay with CH for a while) brings about another problem. The CH has too much money on its wings. Could this transaction then give way to another, involving Josh Anderson?

As for speculation that Josh Anderson could be swapped, Kent Hughes said it’s not his intention to swap it. But he also said that he will not give up any opportunities to improve his team.

When asked about it, Hughes replied, as he always does, saying he would never say no to a trade that will improve the Habs. Obviously, he has no plans to trade number 17, but that doesn’t necessarily mean he will stay in Montreal for the remainder of his contract. But Hughes loves Anderson and doesn’t give up.

“Several teams called Josh Anderson and then he wasn’t traded. It can show you how much we love Josh and that we want him to be part of the Canadiens organization. “

Logan Mailloux could participate in the development camp

Kent Hughes also confirmed that Logan Mailloux has been in Montreal for several weeks and that he would like the young man to join the development camp this summer.

“Logan (Mailloux) will be in Montreal for several weeks. We would like him to come to the retreat to see him act with the other hopes of the team. “
– Kent Hughes

And if he does well, perhaps he could even attend the recruiting camp, just to familiarize himself with the members of the organization. Honestly, if the Canadian really meant to give him a chance, I wouldn’t see anything wrong with that. Of course the contract can wait, but why not take him to the pitch and see what he has got?

Hughes gets more and more calls for Jeff Petry

Regarding the Jeff Petry. It is obvious that the CH is looking to trade the veteran defender. Hughes even admits to getting more and more calls on this topic.

“I don’t think there’s an upcoming trade with Jeff Petry, but that doesn’t mean he can’t have one in the draft. (…) I can tell you that the phone rings more this week than last week. “

He says, however, that he won’t give a draft pick in an attempt to get rid of Petry’s contract.

“Are we thinking of using choices to trade players with more expensive contracts, like Jeff Petry? No, this is not our intention! “

In my opinion, this is a good thing. There is no rush in this case. He’ll never get the moon for Petry, but I’m sure he’ll get something.

Luke Richardson advances to the second round with the Blackhawks

And then finally confirmed the rumor that Luke Richardson had an interview with the Blackhawks. Not only that, but there will also be a second.

Canadiens assistant coach Luke Richardson had a first interview with @NHLBlackhawks a couple of days ago for the job of head coach and will take part in their second round of interviews.

However, Hughes also stated that Richardson had no plans to leave the Canadiens unless he became a head coach elsewhere. This is great news for CH, considering Richardson’s experience makes a nice contrast to Martin St-Louis and his flagrant inexperience. Richardson is a great piece in the Canadian’s organizational chart and it would be perfect to keep him for a few more years, but I wish him a chance all over again, which he will never have in Montreal.

Kadri is back on the ice 👀👀👀 pic.twitter.com/rg0ln2bPuW

The Ducks jumped at the opportunity! 😂 pic.twitter.com/dkUWXLInlw

NHL and NHLPA officially announce that next year’s salary cap will be $ 82.5 million, as planned.

Rangers have signed Blais for a 1 year extension just below his QO. He will be a UFA when his new contract expires next summer. Https://t.co/Kz5JKTVZa2

– It will change a lot in a few weeks.

LRDS // Dadonov in Montreal and Weber out. This is the beginning of the revival, as explained by Yvon Pedneault.