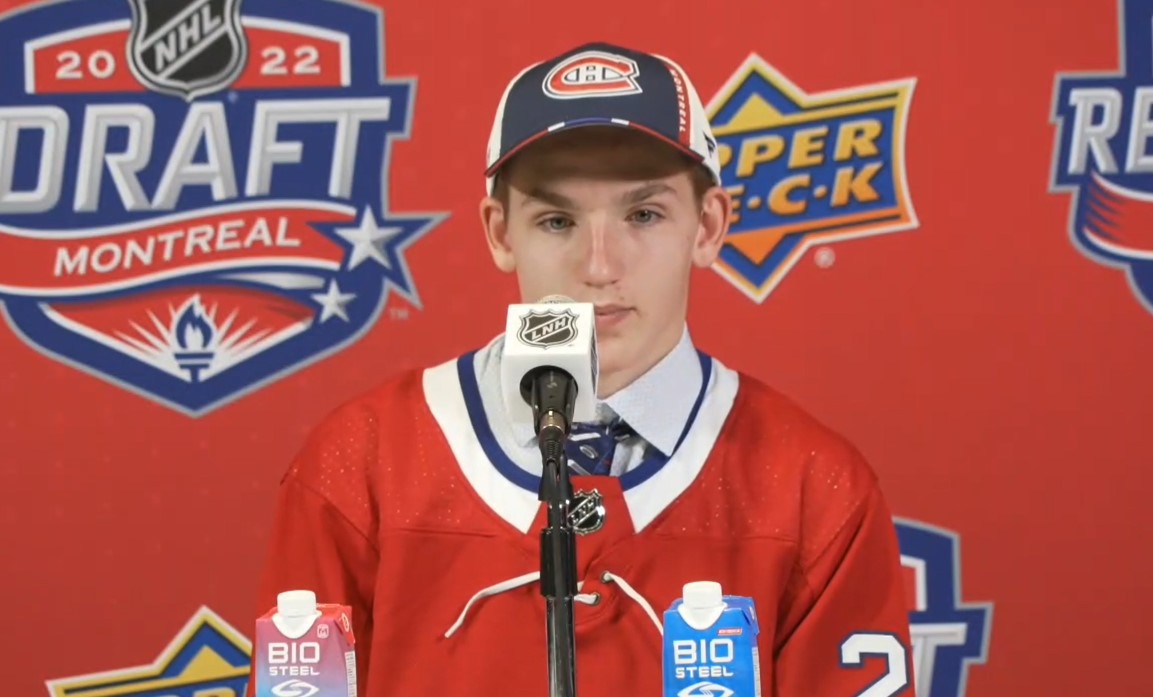 When the Canadian took the floor early in the second round this morning with the 33rd pick of the draft, several pundits then saw small defender Lane Hutson as one of their best hopes. However, CH opted for Owen Beck instead, who isn’t a bad player either.

However, when the team resumed the track in 62nd place, Hutson was still there, and this time it was the Montrealers’ pick.

Hutson is a left-handed defender in the American development program described as a spectacular offensive defender → https://t.co/UEIsl3FQYS

But why am I talking about Hutson rather than another hope sketched out by CH in the last 24 hours? It’s pretty simple: in my opinion, he has a real chance of being one of the biggest steals in this draft.

Before you waste your time reading that last sentence, let me explain.

If you look at what the young defender is capable of offering on the ice, it is difficult not to be immediately seduced by his offensive skills. By focusing on just that, you can compare him to defenders like Quinn Hughes and Adam Fox, a guy from whom he admits he drew inspiration.

I know this comparison is huge, but watch this video to give you an idea. He won’t do this in all games, but just having it in his toolbox is impressive.

But if he’s so offensively gifted, what explains his being drafted so late? The answer is very simple: his small stature.

Lane Hutson is 5 feet 8 inches and weighs just 159 pounds. Clearly, we are talking about a guy who is not the size of a Zdeno Chara and obviously this is a cause for concern for the teams.

However, as we have seen in Montreal over the past decade, the little players can move to the NHL. Brendan Gallagher is a good example, as is Cole Caufield more recently. It’s a gamer adjustment, sure, but it is possible.

And at the end of the second round, it’s a bet Very interesting that took the CH. If Hutson had been only a few inches taller, he would certainly have been a choice in the first round and possibly a choice as well. top 15.

With Hutson, the Canadian is betting to be able to compensate for his small size with an offensive game worthy of the best young attacking defenders. After all, Huston has scored more points in the American development program than Fox and Hughes (and has done so in fewer games).

Gorton and Hughes may have taken their PP boyfriend. Very underrated prospect to choice 62.

I’m not saying the young CH defender will become an elite defender like Fox and Hughes. The reality is that the chances of such a scenario occurring are quite slim. However, considering he was drafted in 62nd overall, Hutson is a bet I love for CH.

In a scenario optimal (and I insist, it would be in the better worlds), I see Hutson become a player to Torey Krug (another guy who inspires him).

He won’t be a number 1 defender like Fox and Hughes, but if he can be a good second pair offensive defender and a quarterback in power play, he’ll be a win across the board for the Habs, who only needed to use one pick in delay of the second round to acquire it.

In short, I have it Very I can’t wait to see what Hutson can do in the years to come, but clearly there is room for optimism in his case. And if so, he will be yet another player who will make the other teams regret having only looked at his size rather than the many qualities of his game.

– Jeff Petry’s case is yet to be looked at.

Dreger on TSN: “Is there interest in Jeff Petry? There is, but not enough, that the Montreal Canadiens are comfortable moving him this week, so it is a story that we will continue to follow ”.

LeBrun on TSN says Darcy Kuemper is a possible match with the Washington Capitals.

My story about Jack Hughes, the son of #Habs GM Kent Hughes, selected in the second round of the NHL Draft since @LAKings #HabsIO: https://t.co/FEvIKE07ly

– 19 QMJHL players were enrolled this year.

We will return to the 2022 selection session in a few moments. @ hockey360 #NHLDraft pic.twitter.com/l74k0vKwE8