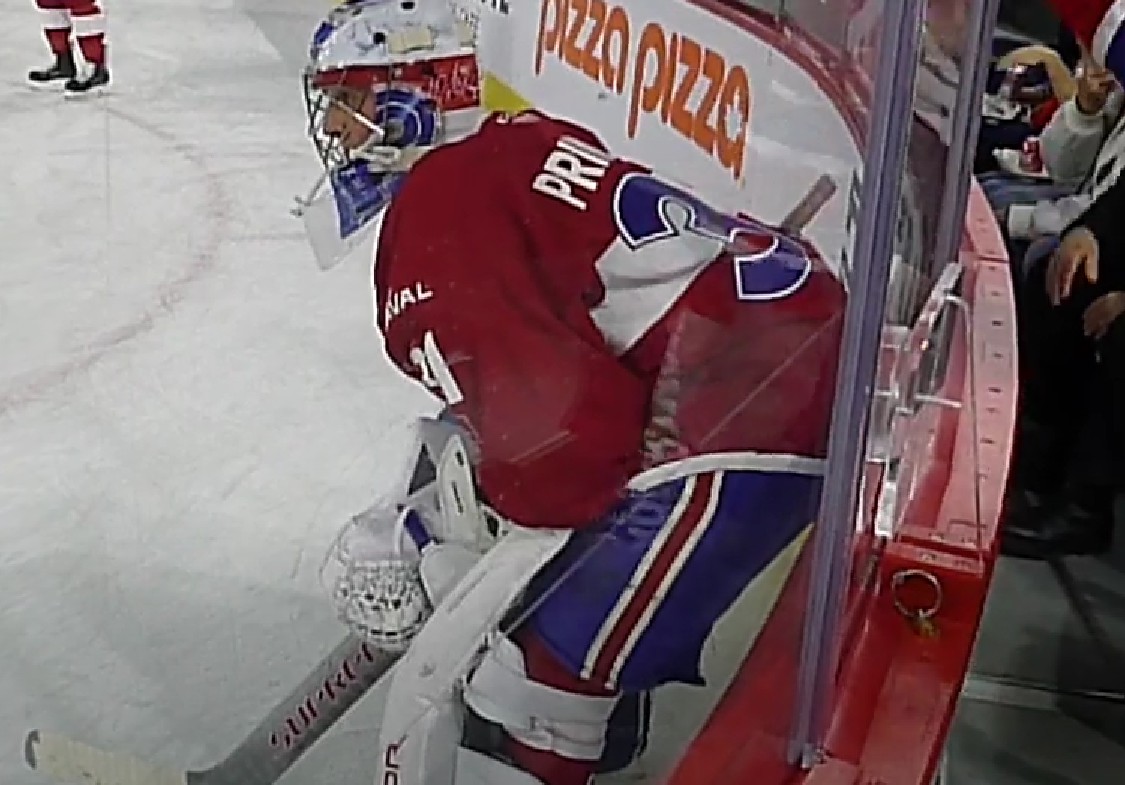 Today we’re transporting ourselves into fairly familiar territory with an analysis that focuses on a prospect who has held nearly the same rank in this count for four years: Cayden Primeau.

Potential
We seem to be repeating ourselves, but very smart is anyone who can predict the kind of career Cayden Primeau will have in the NHL. Several teams appear to have young, athletic and talented goalkeepers with a profile similar to Primeau’s, but how many will become number 1? Who will be the elite goalkeepers of tomorrow? In recent years Vasilevskiy has become one. After a few compelling seasons, Jarry and Shesterkin seem on track. After them? There may be others, but as a rule we don’t rush to the gates and everything remains to be demonstrated for most NHL “young” goalkeepers or those on the verge of catching up.

The reality is that very few become beginner goalkeepers before the age of 25. And it is precisely on the horizon that still looms for Primeau, who has just turned 23.

After being one of the best goalkeepers in the NCAA and a great US goalkeeper at WJC 2019, even though he had some ups and downs last season, Keith’s son remains one of AHL’s top young goalkeepers since his arrival in Laval . After a somewhat stormy season (no pun intended with his coach’s name), he was undoubtedly the Rocket MVP in the latest series, which has certainly reassured more than one, including his own bosses. …

In terms of potential, Primeau is not the next “best goalkeeper of his generation”. He still needs to improve his movements and some other technical aspects. However, it’s all going to end up being played mentally, and in last spring’s AHL playoffs Primeau gave an important display of character.

Unless the train goes off the rails completely, he still has a chance to be part of the next generation of starting goalkeepers on the Bettman circuit. In the meantime, he could start by becoming a very good number two, if not this season, next year.

Insurance
Primeau was often praised by his former manager Joël Bouchard who saw him as a “special player”. For Bouchard, Primeau played like a pro, trained, ate and slept like a pro. Primeau therefore takes great care of himself. And since he has already paid off, he even takes care of the planet!

In addition to his talent, which we still believe above average, it is also the intelligence, character and seriousness he shows that reassures us about his future with the Habs or elsewhere in the NHL. The boy clearly has a head on his shoulders. Following in the footsteps of his he father, he always knew what it took him to become a pro. For many, it’s not something you acquire until your mid-twenties …

Finally, there is also that the Canadian did not have to rush his arrival in Montreal with the presence of Price, Allen and Montembeault. Someone would have hoped for it earlier in Montreal, but with the precautions taken towards him, we still dare to think that when the time comes, Primeau will be ready for the role of number two in Montreal, and from there a real fight for the position of departure.

According to some internal echoes, Primeau started arousing some dissatisfaction last year when it struggled to meet expectations. But sometimes it takes a bit of adversity in minors for a young wannabe to level up and it is precisely the experience that the young American was able to do last year at the playoffs in Laval after being pushed into the goalkeeping hierarchy during the season of veteran Kevin Poulin.

Use the value
Time has passed and it seems that the small and large plagues will eventually get the better of Price. At the same time, the use value of all goalkeepers in the organization has increased considerably and that of Primeau – whether or not you think he may become number one in Montreal – is no exception.

Sure, the Canadian now has a few other interesting goalkeepers in his branches, including the giant Jakub Dobes (5And tondo, 2020), Czech, excellent with Ohio State University last year, and Danish (5And round, 2019), Frederik Dichow, who for his part stunned in the Swedish second division before being promoted to SHL with Frolunda this season.

Trevor Timmins threw two darts in 5And round in 2019 and 2020, and whether it hit the mark or not remains to be seen. Right now, it’s hard to say whether Dobes and Dichow’s potential is greater than or equal to that of the Americans, but Primeau is no longer alone in the potential bank in his position, as has been the case for some time. Both giants are certainly intriguing and are doing very well since their respective drafts.

That said, Dobes and Dichow’s success in the lower leagues is good. But you shouldn’t make the mistake of getting carried away. They are still a long way from the NHL and we are certainly not done redoing the organization’s plans according to them.

And after investing so much in Primeau, it’s hard to see why the organization stops believing in him when he’s just had such a good streak (14 games, 2.17, .936). If Primeau goes on with a great season behind what should be another pretty good Laval team in 2022-23, he will certainly be given some NHL games, especially if we plan on swapping Allen after the holidays in his final year on the contract.

If everything is decisive for Primeau this season in Laval and Montreal, and things turn out well at the next camp, it is not the $ 1 million salary granted to Montembeault that will permanently block his access to the Bell Center in 2023-2024.

Obviously, it is not impossible that a relatively young goalkeeper with a higher profile than his will now arrive in the organization. Names have already been mentioned, including that of the promising Devon Levi, recently acquired by the Sabers from the hands of the Panthers …

We therefore understand that Primeau’s value for CH could completely change over the next 12 months. Everything will depend on him. If from his performance he manages to swallow the words of his GM Kent Hughes – who perhaps stung him a bit last spring by saying he didn’t see a goalkeeper capable of being the No. top 4 on this list next year. If, on the other hand, Primeau stumbles or shows no progress, it could be his last appearance on this list.

One thing is almost certain, after four seasons ranging between 5And and 7And place, there’s a good chance there will be a change in his case next year!

Trade-in value
Primeau’s trading value is not to be underestimated. Without being the next Shesterkin, he is CH’s best hope in goal and not all organizations are counting on as good a hope as he is in this position. Despite this, the young American does not have such a profile rare and it still appears to us as a classic case in which the club’s use value exceeds its market value.

Organizations know that goalkeepers almost never reach their full potential before age 25 and therefore take the time to quietly develop one, two or even three good prospects on goal. Canadian is not very original here. Except for the rare “I can’t lose this guy”, the commercial value of these promising young goalkeepers in development remains somewhat hazy.

All organizations also tell themselves that should they ever have a short-term need to fill in front of the net, there will be interesting temporary options available on the market or on exemptions. This is how Jake Allen came to Montreal and how the second goalkeepers waltz continues each season in the NHL, and how others like Montembeault can come together to buy a little more time before the organization’s potential number one candidate is ready.

In short, except for a surprise exchange that would almost certainly involve another young goalkeeper in exchange, everything indicates that the organization will give Primeau the opportunity to play what will undoubtedly be the most decisive season of his career. All that remains is to get her to sign a contract that can tell us a little more about what you think of him …

Conclusion
The reason why Primeau was again placed in front of wannabes like Mesar, Harris, Mailloux, Roy and Farrell is pretty simple: of the lot, is that why the CH should have the most clearly defined plans in a major, even Very Important role. .

Whether you become a second goalkeeper for thirty games or a first goalkeeper for fifty games, all this seems to me to have more value than players with fairly common profiles, of which we do not know at this stage. they will not reach their full potential. With Primeau, 23, and everything he has shown in his career so far, we already know a little more about what to expect and may be in dire need of him this season.

Although for the second consecutive year the Canadian will aim more at the bottom than at the first place in the overall standings, the pressure will be great on the best hope of the organization in front of the net.

The price has gone. Allen, who could earn a first-round pick this winter, is likely making his last few miles in Montreal. And Montembeault remains only an insurance policy.

The road is therefore clear for Primeau. He just has to avoid taking the field …