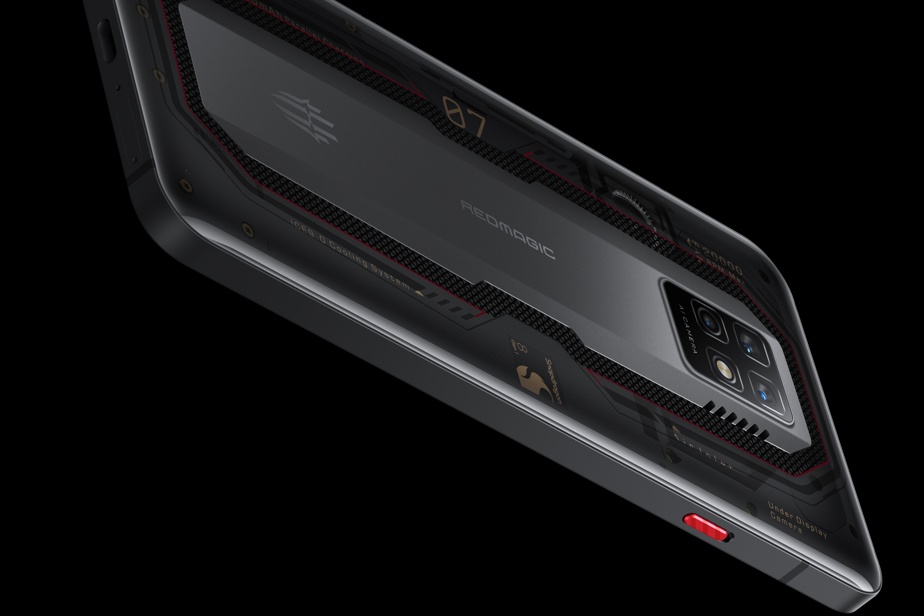 Everything in the REDMAGIC 7 Pro phone, from lettering and icons to special buttons and the fan, is designed for gaming. But while it offers incredible power for its price, it’s still a niche phone that won’t appeal to everyone.

You won’t confuse Nubia’s REDMAGIC 7 Pro with other Android stars. From the home screen, we are entitled to characters that mimic the display of a liquid crystal screen, a record of hours and minutes of video playback, and a large widget to turn on its little fan.

Yes, it has a fan that runs at 20,000 rpm, which isn’t too loud, to ensure it doesn’t get too hot during gaming sessions, but we did notice a noticeable rise in temperature after half an hour, but nothing that staggered. the processor. Another flagship for gamers, generally wary of Bluetooth connections: we kept the 3.5 mm socket, which is very rare in 2022.

We have placed a large red button on the left side that turns the phone into a small video game console. When pressed, the button opens a menu in which all the games offered are displayed, where you can, among other things, pair your phone with multiple remote controls and record a video of a game.On the back, two adjustable light strips flash during a game is open.

Its 6.8-inch AMOLED screen, with hidden front camera, has no notch at the top. The REDMAGIC 7 Pro received a 120 Hz refresh rate and very good sensitivity with a touch sample rate of 960 Hz. The Galaxy S22, for comparison, has a frequency of 240 Hz.

We therefore have in our hands a phone with a very responsive screen that offers well-defined images.

Under the hood, we have a Snapdragon 8 Gen 1 with 16GB of RAM. The graphics card is an Adreno 730. Let the Geekbench 5 benchmarking software give us an objective verdict on the power of this paraphernalia.

When it comes to power, REDMAGIC 7 Pro stands out as the best Android phone we’ve tested. Its graphics capability is only beaten by that of the Pixel 6 Pro.

The battery is generous, at 5000mAh, and can be recharged in under an hour with the included 65W fast charger.

For the photo, the REDMAGIC 7 Pro was equipped with three lenses on the rear: a 64MP wide angle, an 8MP ultra wide angle and a 2MP macro. Selfies are taken with a 16MP lens. This set gets along honestly, nothing more. The photos lack vibrancy but offer a satisfying level of detail and contrast. In short, it does its job without standing out and cannot compete with the best Androids in this sense.

Same observation for the integrated speakers, individually without depth. We imagine that the target customers here prefer their own headphones.

It’s heavier than average, at 238g, and a little thicker, at 10mm. The culprit is a curious futuristic rear bump, presumably positioned to make room for the cooling system.

The overlay that Nubia developed for Android 12 is sloppy in French, with three-quarters of the menus still displayed in English.

We have no IP certification for its water and dust resistance. Finally, the possibility of magnetic charging is not available.

The devices intended for video games, computers and phones, are first of all powerful machines, with above-average technical specifications and generally more expensive. It’s true from a power standpoint for the REDMAGIC 7 Pro, it’s not for the price, quite advantageous considering its performance.

And the submenu reserved for video games activated with the red button will delight all those who mainly use the phone for video games. Those will be seduced by the Nubia device, which does not lose its first clientele.

Its design and small flaws outside its niche, however, don’t make it a very recommendable choice for non-gamers.