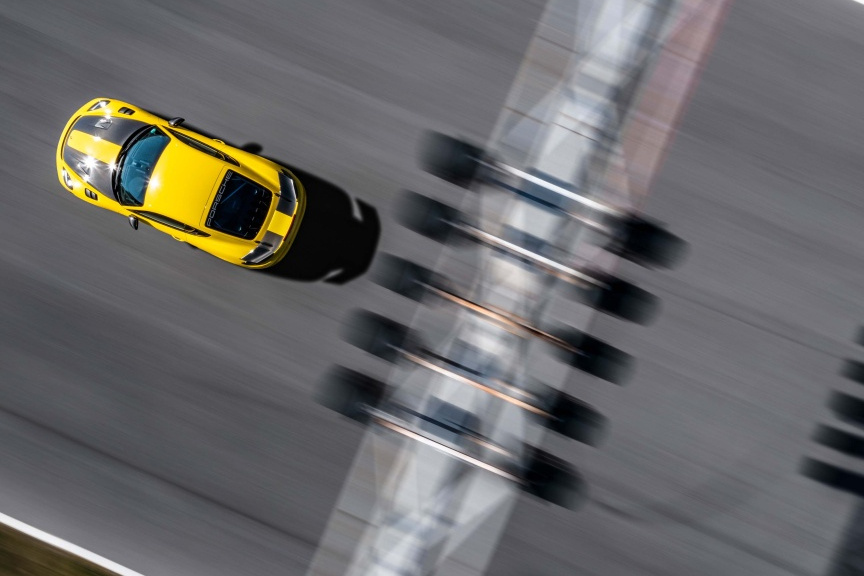 (Willow Springs, California) With the 718 Cayman GT4 RS, Porsche revisits its past and proves that the passion for cars is not dead.

The 911? Porsche and her followers have eyes only for her. This is probably the reason why she has never been seriously worried by another sports car from the Stuttgart house. Not this time. By attaching the RS (RennSport) signature to the 718, the German manufacturer revives a name that, long before the 911, would have established its reputation in motorsport.

When we talk about transfers from the world of racing, we are talking above all about working methods and materials (which is why these cars are so expensive).

In the wake of motor racing, the designers decorated the GT4 RS with seriously thought out and elegantly integrated aerodynamic appendages to increase downforce (for grip) and drag (top speed). Like on a real racing car, both the front diffusers and the rear spoiler are fully adjustable to achieve the desired balance depending on the route. And the adjustment options don’t stop there. You can also change the camber angle and suspension toe. You’re a pilot and a good tuner, aren’t you?

Ridged with small and large openings, the body promotes both the flow of air and the cooling of the mechanics. The latter on paper appears in all respects identical to that of the 911 GT3. This is not entirely true. The engine manufacturers had to make several changes to accommodate it in the central part of the 718 Cayman GT4 RS. The placement of several accessories had to be reviewed, including the piping and the dry sump pump. Ultimately, there is a slight power deficit compared to a 911 GT3 due to the profiling of the exhausts.

From the very beginning, in fact, this two-seater can be felt alive in all its components. The engine roars. Add in the swirls of air and the rolling sound of tires, and you are in the heart of an orchestra that has no problem making itself heard! The manly type frame communicates its mildest reactions, which also helps to make it exciting to master.

Impressions confirmed by the comparison on the track, where we were able to test it. Because it generates significant downforce, the GT4 RS is a “human-sized” racing car, the driving of which reveals strong yet controllable sensations, and is within the reach of a well-trained amateur driver. For even more thrills, Porsche offers the Weissach package and expensive magnesium wheels to reduce unsprung masses. These have a distinct impact on road holding, provide greater steering wheel sensitivity and allow for more radical trajectory changes.

Agile, with surprising traction and fast, precise steering, the GT4 RS reveals its formidable potential in just a few corners. Over time, trust builds and the pleasure it offers continues to intensify as we learn to harness the extraordinary gifts it gives us. He just asks you to be pampered.

Moreover, its main quality is perhaps the fact that it never surprises you. Impeccably balanced, devoid of inertia, the chassis displays exemplary stability in all stages of driving, including the most critical. It is useless to recall the braking, which is very efficient, especially if made up of carbon ceramic brakes (optional).

To avoid big mistakes and warn the pilot that he risks overstepping the limits of reasonableness, a battery of electronic equipment makes it possible to correct the shot in the event of a small pilot error.

That said, you have to be careful to calm your excitement when driving on wet surfaces, especially with the Michelin Pilot Cup 2 R on them. They are real bars of soap in the rain. If, on the other hand, the road is clear, dry and very hot, the cavalry of this Porsche can launch an assault.

The seven ratios are linked to each other at a constant pace, we discover with disbelief that the needle of the tachometer touches, without even making a mistake, 9000 rpm. It calms you down. Luckily, you don’t have to turn into a public hazard to appreciate the thrust of its both majestic and hair-raising mechanics. On its own, its inimitable metallic acoustics are already a delight … over short distances.

But the 718 Cayman GT4 RS doesn’t just have quality. Its suspensions, mounted on rigid joints, allow too small movements, especially if the path is reduced to ruins, as in the streets of Montreal. And what about its front fairing which, despite the presence of jacks to lift it, requires you to approach the bumps diagonally with extreme caution, with the risk of tearing everything. You just have to adapt your driving style.

The hosting costs related to this report were paid for by Porsche Canada.

Only the plate reminds us that this is a production vehicle.

Earn money on Sunday, to sell better on Monday. This is the reason that, since its creation, has pushed the automotive industry to devote itself to motor racing. At the Gilles-Villeneuve circuit next weekend, five manufacturers will try to establish this correlation between Formula 1 and the production cars they intend for us. And, of course, Porsche will do the same in 2026, the year of its return to the queen discipline where, as a manufacturer, it made a lightning transition during the 1962 season with the American driver Dan Gurney (our photo).

The hunt for lb

“Weight is the enemy. This quote uttered by Émile Mathis in 1932, but mistakenly attributed to Colin Chapman, was probably written in full at the top of the 718 Cayman GT4 RS specs. To reduce its mass, the designers opted for bucket seats in carbon fiber (- 13 kg), but also a polycarbonate bezel instead of glass (- 1.7 kg). Finally, this two-seater has been lightened by 32.6 kg, and we offer the option (optional) of making it lose an additional 26.9 kg.

The print will publish the review of the following vehicles soon: Acura Integra, BMW i4, Honda HR-V, Porsche Cayman, Subaru WRX and Toyota 86. If you own one of these vehicles or anticipate delivery, we would like to hear from you.