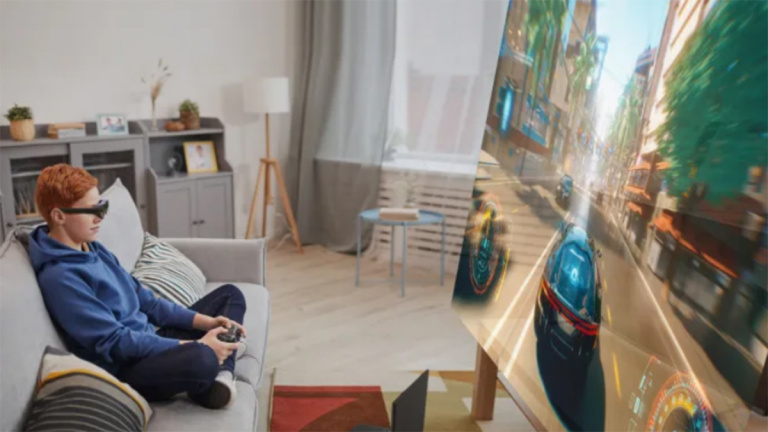 The Steam on Nebula application will soon allow owners of a pair of Nreal brand augmented reality glasses to play certain PC games in a new environment.

The augmented reality glasses Nreal Light and Nreal Air are available in some countries from August 2020 and May 2022 respectively. These devices, developed by the Chinese company Nreal, allow enjoy a daily AR experience. For this, they allow the wearer to spread in front of him the equivalent of a giant screen measuring up to 200 inchesall virtually.

This makes it possible in particular to enjoy movies and series in augmented reality, using a 5G connection. You must connect the device via USB to a smartphone for it to function and access the Internet. Very soon, the experience offered by Nreal’s glasses will take a new turn, as they will give access to some Steam games via a question being finalized.

Steam on Nebula Beta will be arriving by the end of the month on the Nreal website. This application will create a link between the famous video game platform and the 3D Nebula application, which equips Nreal Light and Nreal Air. The company has not yet provided all the details that will allow the two solutions to interact with each other, but the promise it makes is that of a virtual screen several meters wide, which allows play augmented reality video games.

However, the list of compatible games should be limited, at least initially. Games from the Halo series and the Dirt Rally car racing title will be among the first to be made available via Steam on Nebula.

It should also be noted that owners of a pair of Nreal AR glasses can already access the games available through Cloud gaming for Xbox. This new proposal aims to expand the possibilities offered by these devices.

If this proposal allows you to get an idea of ​​the potential of augmented reality in the vast field of application of the video game, it is still far from being available to everyone. The Nreal Air pair of glasses is currently only available in a handful of countries, including the UK, Japan, China and South Korea, and the Nreal Light is only available in the US at the moment, priced at $ 599.

We do not yet know when they will be available in France.so to play your Steam games, you’ll probably still have to settle for your good old monitor or your Steam Deck for a while.