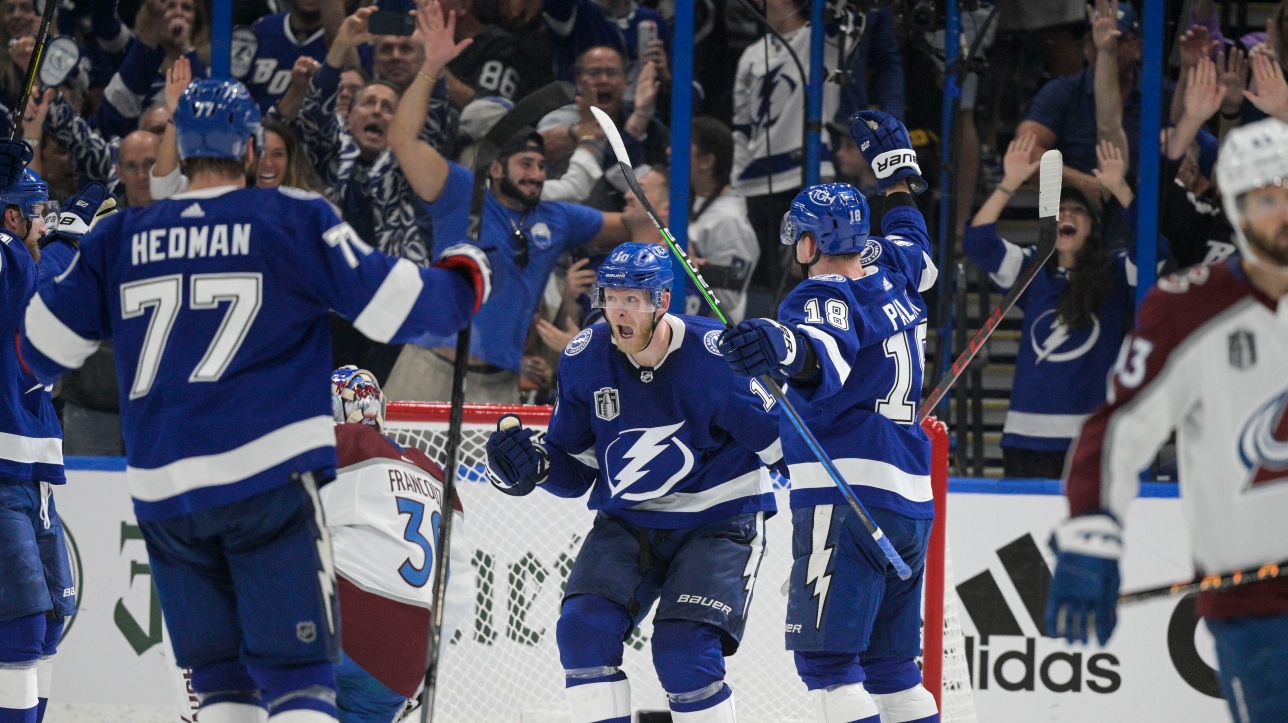 After losing their last game, the Tampa Bay Lightning entertained their fans by winning 6-2 over the Colorado Avalanche in Game 3. The Avalanche led the series 2-1.

Led by the genius of Andrei Vasilevskiy, the Lightning’s exploded with four goals in the second period in Game 3.

It was without Brayden Point that the Lightning tried to win a first game in this Stanley Cup final. The Lightning players showed a lot more intensity and a lot more aggression in this bout.

Andrei Vasilevskiy, who stopped 37 discs during the match, made some key saves in the first period and then held the fort when Nicholas Paul, Steven Stamkos, Patrick Maroon and Corey Perry hit the target in the second period.

The Lightning managed to close the books in the third period. The fourth duel will take place on Wednesday evening, also in Tampa.

Crushed 7-0 in the second game, the Lightning players showed much more intensity and much more aggression in the first few minutes. Anthony Cirelli and Ondrej Palat hit the mark to give Jon Cooper’s men an edge they didn’t let go.

Gabriel Landeskog scored both goals for Avalanche, each time assisted by Mikko Rantanen and Cale Makar. For the first time in a long time this post-season, the Colorado team couldn’t make full use of their speed to do damage.

Darcy Kuemper started the game for Avalanche and was sent off after conceding five goals from 22 shots. With relief, Francouz parried nine of the 10 shots he faced.

In addition to seeing Point lose the game, Lightning may have taken a heavy loss in this game. Nikita Kucherov left the game with just under six minutes to go.

It was the avalanche that struck once again first in this duel. With a man’s lead, Landeskog jumped on a loose puck in front of Andrei Vasilevskiy’s net to give his team the lead.

The Tampa line came from Anthony Cirelli’s club. The Lightning striker made a great move to beat Darcy Kuemper with his first goal in 14 games.

The Lightning have the wind in their sails and add less than two minutes later. Ondrej Palat accepted the surrender of his captain Stamkos to give Tampa the lead for the first time in the series.

Colorado, however, has relied on its massive attack to bridge the gap. Landeskog hit the net for the second time in the match. Cale Makar and Mikko Rantanen both got their second assist of the match on their captain’s goal.

After being unable to beat Kuemper in the last fight, the Lightning seemed to have regained the taste for scoring in front of their fans. Stamkos brought his team back two goals with a good play in the slot.

Lightning really got Kuemper’s number in Game 3. Maroon lifted Amalie Arena’s crowd by scoring a fifth goal with a turn on the net.

Jared Bednar has seen enough. The Avalanche coach sends Kuemper to the locker room and Pavel Francouz enters the field. The Avalanche starting goalkeeper ended his night of work with 17 saves from 22 shots.

Tampa was quick to welcome Francouz. Perry took advantage of a puck missed by the Colorado goalkeeper for 6-2 with 5:02 left in the interim period.

Obviously, the two teams took advantage of the last moments of the meeting to prepare the ground for Game 4. Ross Colton and Logan O’Connor in particular have thrown down the gloves.

Vasilevskiy sets the tone with a brilliant parade

Landeskog in the right place to open the brand

Finally a first track for Lightning!

Kucherov injured after being shot by Toews