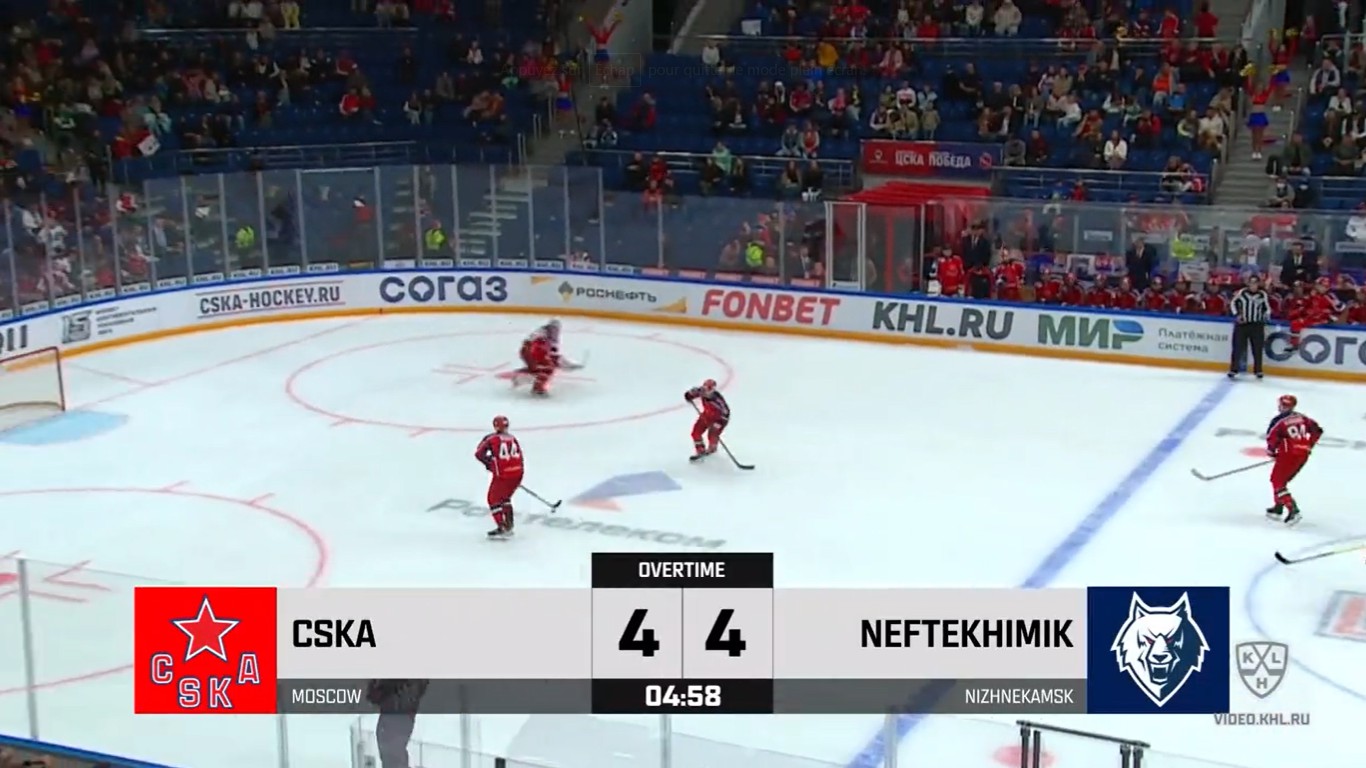 The Kontinental Hockey League (KHL) can be special at times, and we’ve seen a good example of that in the last few days during a match between Neftekhimik Nizhnekamsk (yes, that’s the team’s real name) and CSKA from Moscow.

With the score of 4-4 tied and the extra time just beginning, CSKA manager Sergei Fedorov has decided to withdraw his goalkeeper in favor of a fourth player, thus giving his club a kind of power play.

And the strategy worked. CSKA took the opportunity to score and save themselves with the victory:

It was not the first time that Fedorov was seen using this technique. Last year, when he was in his first season with CSKA as head coach, the former Wings did the same and succeeded … twice.

We know how creative Fedorov had the gift of being on the ice and obviously he is just as creative behind the bench.

Shooting a goalkeeper in the OT? Sounds like a piano. pic.twitter.com/DTnnNYhypr

It’s actually a popular strategy in Russia, as Bob Hartley explained to JiC’s microphone on BPM Sports this morning. Colleague Mitch Giguère had also written on the subject in the past.

But why shouldn’t any team do the same in the NHL? It’s simple: because the risk is too great. I explain.

Normally, losing in extra time always gives a team an extra point in the standings, but there is a specific clause in the NHL rules: if a team takes out the goalkeeper in extra time and loses, they don’t even get the point. “.

Hartley says Gary Bettman introduced the rule a few years ago because the commissioner didn’t want the games to end that way, ruining the sport’s beauty and game in general.

And for once, I tend to agree with Bettman. I fully understand that the strategy can ultimately pay off, but …

Imagine that you paid for tickets to go to the Bell Center, that the extra time of the match against the Bruins had just begun … that Brad Marchand has scored into empty net since Martin St-Louis removed Allen or Montembeault in favor of a another striker and that the Canadian has lost a “given” point in the standings.

What would your reaction be? That’s how I see things, at least.

Time to face the wings in the last “State of the #NHLDucks“position breakdown. Troy Terry finally took off last season. But have another one ready to make a big impact? https://t.co/zilYe79A70

– The question is valid.

Countdown to Boston Bruins training camp: today @BOSHockeyNow watch 34-year-old striker Nick Foligno as he tries to recover from a disappointing first season in Boston. The question is, can he do it? 🐻🏆🏒 https://t.co/MZQapeKsAV

32 out of 32: the best potential customers @Canucks https://t.co/SBQdm5WQmU

“He has to find a way to stay healthy.

The Athletic: Boone Jenner’s 2021-22 season ended early (March 11), at least for the third time he has had a season cut short by a back injury.

But the captain of the Blue Jackets heads towards #CBJ training camp at the end of the month “feel good, ready to go” .https: //t.co/jmGs7tFqsl pic.twitter.com/TaH4rdeuar

– Not easy, managing all these champions.

Mbappé, Neymar and Messi must accept their role as the benchhttps: //t.co/k15baTqOZY