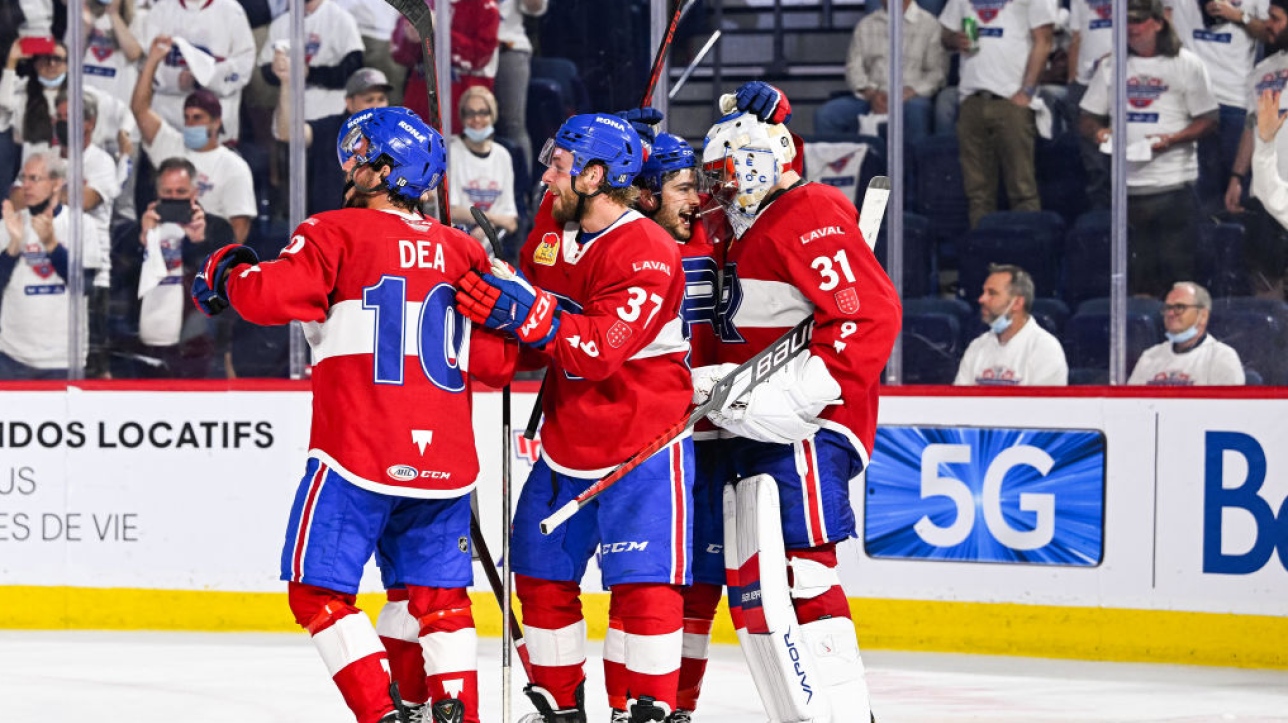 LAVAL, Que. – Jean-François Houle had raised some doubts when he had said, before the American League playoffs began, that he now intended to prioritize the results of his group rather than the progress of the young candidates under his supervision. .

“We had 72 games to develop. There it became very important to win, ”said the coach before his team left for Syracuse.

A few days after the Rocket’s elimination in the Eastern Conference final, we can conclude that the Canadian’s reserve team manager played his cards well enough to finally be able to marry the two terms.

After making veteran Kevin Poulin his trusty goalkeeper for the start of the adventure, Houle quickly changed his mind and gave Cayden Primeau the net. The rising controversy was soon quelled by the performance of the young goalkeeper, who never gave his coach a chance to back down. Primeau was the primary architect of the Rocket’s magical springtime, clearing any lingering doubts about him after a disastrous spell in the National League.

In attack, Houle showed unwavering confidence in Rafaël Harvey-Pinard, even though the latter waited for his tenth game before scoring his first goal. In his luggage, the 23-year-old winger will be able to place this slice of adversity right next to the successes that ultimately followed. Jesse Ylönen, despite erratic performances, also took advantage of the coach’s loyalty to learn his skills.

By favoring a formation with seven defenders most of the time, Houle will have allowed up-and-coming Mattias Norlinder and Gianni Fairbrother to bank on valuable experience. The former played in five games before being hit with a head check in the second round. The second, who had been sidelined since March through injury, entered the scene in the third round and made a good impression.

He will be found lamenting Houle’s reluctance to throw Joshua Roy into the fray. The prolific fifth round pick only played one game after coming as evidence from Sherbrooke Phoenix. The most uncompromising will also mourn the invisibility of Riley Kidney, who remained hidden with the reserves after an excellent season with the Acadie-Bathurst Titan. But ultimately, the Rocket’s performance made all of his manager’s decisions easily defensible.

“I think it worked out well,” Houle said during his team’s end-of-season review. I believe that winning is also developing. Living in a winning environment can help players develop well. Our young players were able to experience difficult to buy. It’s not easy to get far in the playoffs. For them, it’s something that will follow them for a long time. ”

Rocket, which only had six players under the age of 25 on its roster when its season ended in Springfield, is expected to show a significantly younger face next year.

In attack, the choice of the second round of 2020 Jan Mysak will be ripe for a permanent passage to the professionals. Xavier Simoneau will be ready to fight for minutes of play in Laval. We might also see Emil Heineman, a potential 20-year-old client obtained by the Calgary Flames in the exchange involving Tyler Toffoli.

But it is the defense brigade that will undergo the largest transfusion of new blood. Kaiden Guhle and Arber Zhekaj will soon conclude their youth careers at the Memorial Cup tournament. Jordan Harris is preparing for his first full season at a professional level and Justin Barron for his first retirement in the Canadian organization. Not to mention Norlinder, once the darling of this group, and Fairbrother, a former third-round pick who got off to a promising start in the American League.

Some will certainly start the year in the National League. The others will fall under the jurisdiction of Houle, who will have to find a way to put them in the tub without creating too many splashes. It’s a balance that can be difficult to achieve, but the Rocket manager is used to handling this type of file. During its six seasons in an alternate role with the Bakersfield Condors, the Edmonton Oilers farm has developed such prospects as Ethan Bear, Caleb Jones, William Lagesson and Evan Bouchard.

“If you have four young defenders and three veterans who can support them, that you can always put a young man with a veteran to avoid too many mistakes on the ice, I think that is the best scenario,” proposes Houle. You don’t just want to have a youth team that you lose 6-0, 6-1 per game with. It becomes too heavy mentally for the young man and he gets nothing. “

It remains to be seen who these veterans will agree to put their experience to the benefit of the next generation. Xavier Ouellet, who has just finished his fourth season with the Habs family, made no compromises on a possible return, contenting himself with saying that he would “look at the opportunities that presented themselves”. One would think that Corey Schueneman, who just broke into the NHL at 26, will be looking for a situation that will give him a chance to resist. At 25, Tobie Paquette-Bisson hasn’t given up on the idea of ​​making his way to the big names.

Louie Belpedio did not close the door to the comeback. Torry Dello and Terrance Amorosa are other potential mentors the Canadian might identify internally.

“I think we have them here in the bedroom,” Houle said when asked what his thoughts were on the matter after his end-of-season meetings with his players. I think we have the core of veterans that I think we should bring back, because this year they have established a winning culture. So that we too can have continuity. We hope to be able to bring back some. “