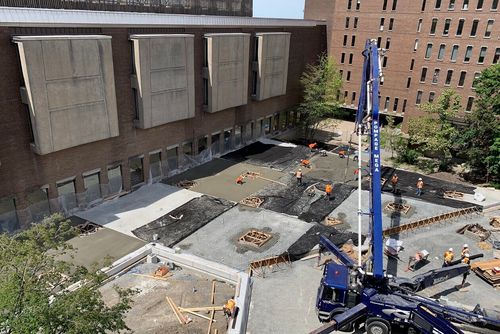 Designed at the same time as the Lionel-Groulx, Maximilien-Caron and 3200, rue Jean-Brillant pavilions that surround it, Place de La Laurentienne is representative of functionalist architecture. Funded equally by the University of Montreal and the Student Life Improvement Fund, consisting of non-compulsory contributions from UdeM students, the renovation of this important meeting place in the heart of the campus was planned. We spoke to Sylvie Gélinas, project manager at the University of Montreal, and Marie-Ève ​​Parent, Lemay’s landscape architect and designer.

It is by walking through the site that we realize the magnitude and complexity of this project. Because before even thinking about the development of public places, it was necessary to carry out major civil engineering works such as the waterproofing and sealing of three underground tunnels, as well as the integration of seven retention basins.

“The biggest technical challenge was certainly the construction of the retention basins, says Sylvie Gélinas. The sharp drop is a major challenge during heavy downpours and the site must now be able to handle rainwater. The retention basins fill up and reduce the risk of overflowing the public water network. Before, rainwater entered the municipal aqueduct and flowed into the river, but the rules have been changed, which is a good thing ».

The monumental staircase at the entrance to the square, on the rue Jean-Brillant side, needed a large wooden formwork that would allow the casting of the concrete structure. “The structure is installed, now we are waiting for the prefabricated steps that will be installed shortly using a crane. The rock was deeper than expected at this location, the rocks had shapes that were absolutely incompatible with the concrete pillars and there was a City drain that we couldn’t move – it was a great challenge. structure! exclaims Sylvie Gélinas. First there was a small staircase six feet wide, on the left it was removed. We have reclaimed the gabbro, the rocky substratum of Monte Reale that we wanted to highlight, and we have greened the surfaces with grasses and other native species approved by the Municipality.

Since the start of the project, an urban forestry professional has visited the site regularly to ensure that the preserved trees are properly irrigated. “Several holes will surround the trees that will be planted in front of the Valère terrace: it is a system of caissons installed before the concrete is poured which protects the tree and ensures that there is enough soil and space under the concrete so that the roots may continue to spread “, emphasizes Sylvie Gélinas.

The planting plan calls for a 25% increase in tree cover, including 68 deciduous trees, including hackberry and lime trees, 222 deciduous shrubs and over 1,000 perennials, grasses and ferns. “In the area adjacent to the Lionel-Groulx pavilion, 20 trees have already been detailed, selected and reserved, taking into account the dimensions and a minimum diameter of the trunk that had to be respected, specifies the project manager. In the three triangular benches will be planted oaks whose trunk diameter will be greater than the other species, all native species of Mount Royal. The vegetal surface will cover more than 3500 m2.

In addition to the technical challenges, other issues related to respect for heritage attracted the attention of the designers. The rocky outcrops found throughout the campus, and more particularly around the Place de La Laurentienne, are among the many natural attributes of the site highlighted in 1968 by landscape architect Jean-Claude La Haye, who designed the masterplan at the time. for campus facilities. For Marie-Ève ​​Parent it was important to preserve this imprint, both in the natural elements present and in the characteristics of the built structures.

“You really feel this organic influence coming down resolutely towards the square. The rocky outcrops reveal clusters of gabbro, the bedrock of Mount Royal, which we have tried to expose and highlight, as in the wall running along the steps of the Samuel-Bronfman pavilion or in the riprap near the Lionel-Groulx pavilion that we just cleaned up, which will be surrounded by new native vegetation and on which the monumental staircase will lean. This is one of the elements we keep from Mr. La Haye’s concept, it will be magnificent! ” points to the landscaper.

The conservation and enhancement of the characteristic elements of the developments is also essential, such as the hexagonal motif of the triangular-shaped concrete slabs taken from the initial layout by Jean-Claude La Haye (three shades of gray available in six textures) or even the concrete materials of surface.

“We worked with the vocabulary of shapes designed by Mr. La Haye and found at different points on the mountain campus,” says Marie-Ève ​​Parent. It was a principle behind our concept: to preserve these elements, also to strengthen them, while respecting the original design, but not only in an aesthetic key. We wanted to act soberly, which we did in the furniture. So we were inspired by what he did and came up with more contemporary furniture that maintains very clear geometric shapes. “