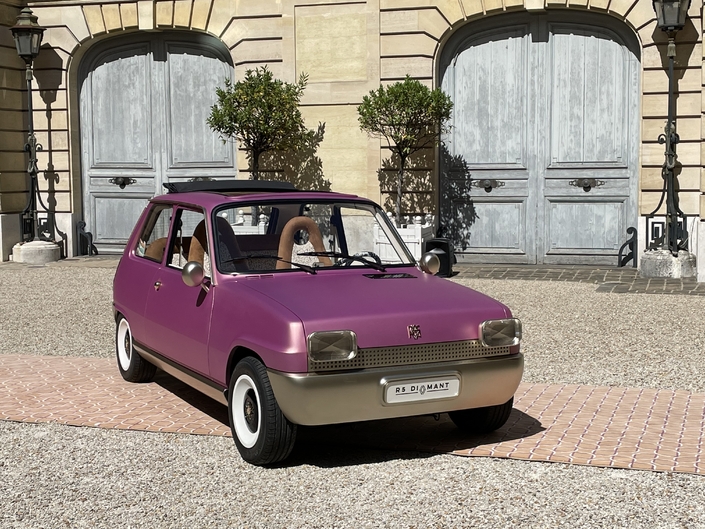 The Renault 5 celebrates its 50th anniversary this year. Symbol of the popular car in the late 1970s, the city car sold more than 5 million copies. To celebrate this half-century, the French house collaborated with designer Pierre Gonalons to create the R5 Diamant, an electric showcar that embodies the Twingo’s grandmother.

“Pierre Gonalons is a young designer from Lyon specializing in furniture and interior design. He defends a design that mixes decorative arts, popular culture and minimalism,” explains Renault. It is a contrast between a refined bodywork, here colored with golden pigments on a pink base, and aesthetic details deliberately removed from their environment that the designer wanted to highlight.

This Renault 5 Diamant, in fact, maintains the shape of the original 1972 model but the designer wanted to highlight all the aesthetic artifices such as the diamond-cut front and rear headlights or the wide wheels, inherited from the Alpine version, reworked and signed in the their center of the sun.

The designer called in various French craftsmen to dress the interior of the R5. Stonecutters for this imposing steering wheel in marble and carbon, weavers for the mohair rugs and horsehair trimmings, or even a gilder who created all the ornaments from brass.

This show car is a nod to the past but focused on the future. There are many technologies such as, for example, a fingerprint reader positioned on the doors, digital circular meters and an infotainment system concentrated in a smartphone. Without forgetting the engine, 100% electric.

This show car is a nod to the past but focused on the future like circular digital meters and the smartphone as a multimedia system.

Renault has decided to enter the world of NFTs and as part of this project the diamond brand and Pierre Gonalons will also develop a collection of NFTs inspired by the Renault 5 Diamant, which will be presented in September. As for this Renault 5 Diamant, it will be auctioned a few weeks later. The proceeds will be donated to the “Give Me 5” association, dedicated to the younger generations through sport and music.