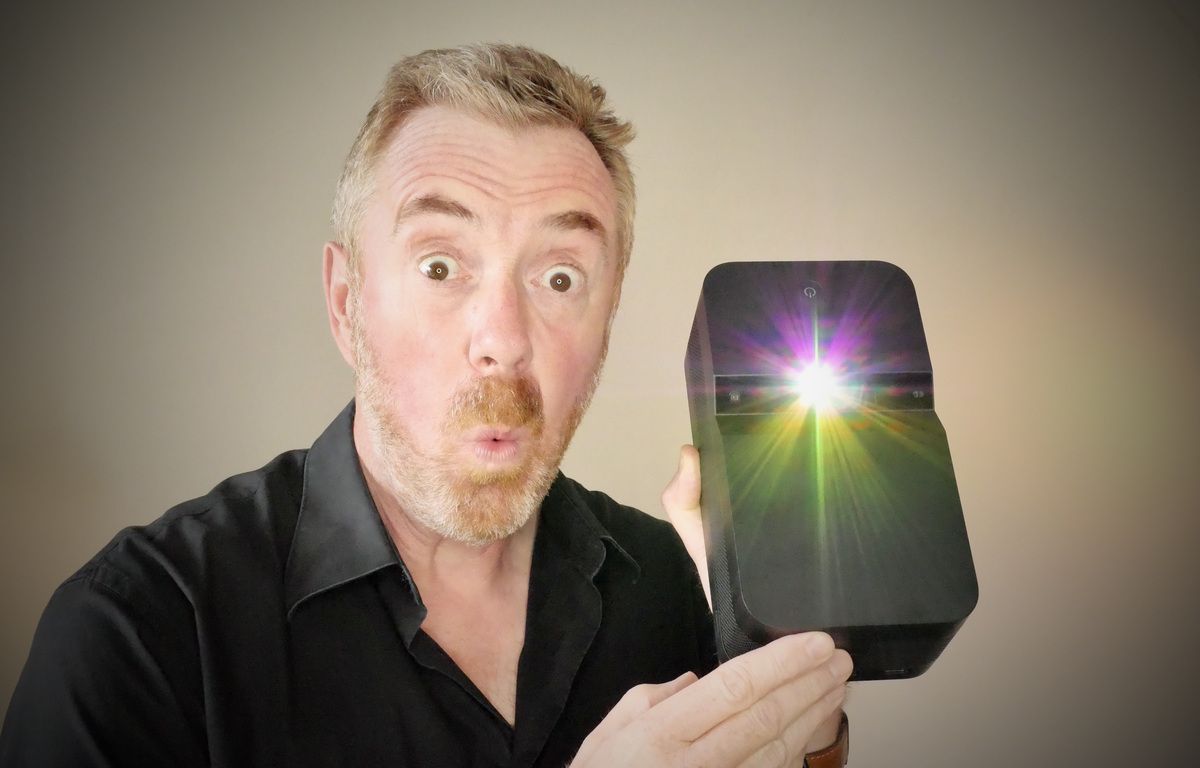 Small projector, (very) big screen! After its noticed but overpriced Screeneo U3 sold for nearly 2,000 euros, Philips is doing it again with its Screeneo U4. Launched on the platform of fund-raising Indiegogo where it has collected almost 1.9 million euros in orders, this ultra short throw projector is still offered there for 599 euros, compared to 1,199 euros in stores. A good deal? “20 Minutes” was able to test it in preview.

2 meters diagonally 30 cm from the wall

Unpacked, the Screeneo U4 surprises with its very small size. Measuring 12.35 x 8.15 x 22.35cm (for 1.4kg), the device advances with a fairly sleek design. In addition to its discretion, this projector therefore has an ultra short focal length. This means that you can place it very close to the projection screen or wall. Judge for yourself: it offers a screen diagonal of 15 inches (38 cm) at 19.5 cm away and up to 2 m diagonal at 30.5 cm! This is a positive point that makes him a champion of discretion. But also equipment that can easily move from one room to another.

Full HD, HDR10 accounting, are quite well equipped to satisfy our increasingly greedy desires for images. For this, it has two HDMI sockets (one of which is CEC) and a USB 2.0 socket. Its audio section is also quite well equipped, with a pair of 2 15-watt speakers on board. Originality: the Screeneo U4 is also Dual Bluetooth. This means that you can connect two wireless speakers to it, but also headphones or headphones for stereo listening. A wired headset will also do the trick with a 3.5 mini-jack.

We saw it during our test: the Screeno U4 is the embodiment of simplicity. Without having to make any adjustments (the camera focuses and corrects keystone distortion by itself), it is ready to use. All you have to do is enter its Menu to adjust the brightness and select the desired audio output. So, plug in a Blu-ray / DVD player, a computer, a USB key … and enjoy its content with the remote in hand.

While the “wow” effect is essential when the image is displayed very, very large and very sharp, while the device is positioned at the foot of our white wall, we had to quickly draw the curtains of our living room to offer it a more favorable for the quality of its display. The reason ? With its 400 lumen brightness, the projector is struggling in a room where there is no dark. Hence contrasts that really lack depth and slightly faded blacks. The Screeneo is therefore more suitable for a real film / series session in a darkened room than for television use.

For its part, the audio quality offered is quite convincing, given the small size of the product. The fan noise of the device is perfectly covered. Combining two Bluetooth speakers (as long as you have a pair and they are powerful) increases user immersion and allows you to broaden the sound spectrum by placing the speakers on either side of the picture. The result is a true cinematic experience.

Compared to the Screeneo U4, the overall impression is quite good. Otherwise its brightness which deserves to be strengthened, finally lacks enough to repatriate the contents without the need to connect any reader. We would have really appreciated that it was natively Android TV, just to further simplify its use. Instead, you will have to add a Google Chromecast key (€ 69), an Amazon FireStick (€ 59) or an Apple TV box (from € 159) …

Quite interesting for its exclusive launch on Indiegogo (€ 599, which is a great price for an ultra short-throw projector!), The Screeneo U4 is likely to get a little less exciting when it hits the market in August, at € 1,199. It will therefore be faced with more equipped and less expensive projectors, such as Samsung’s brand new The Freestyle (a short-throw model sold for 819 euros). Also, compared to classic projectors, but better connected and brighter, such as BenQ’s W1800i (1,290 euros). This Android TV model shows a brightness of 2,000 lumens. And it’s Ultra HD.