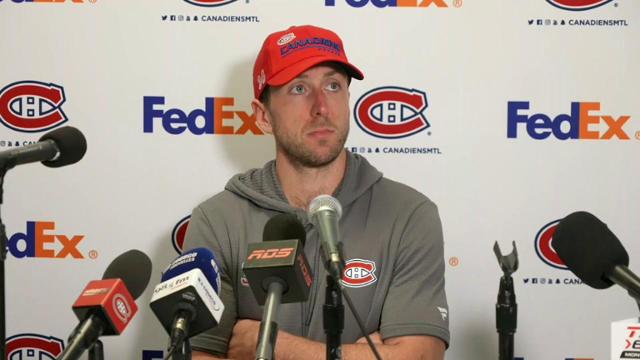 Last night, Kevin Weekes literally held my sleep hostage when he started posting a series of tweets about the Canadian and his guards. What was the informant trying to tell us?

Did he want to warn us that a contract was imminent for Cayden Primeau?

It may have been because Kent Hughes said he was coming (and because it finally settled this morning), but instead he wanted us to know that a contract extension for Jake Allen with CH was planned.

Also, this morning, we learned through Andy Strickland that discussions are still in the early stages. This would in particular reward a good soldier for the CH, as Kent Hughes did with Quebecer Samuel Montembeault.

Montreal and goalkeeper Jake Allen are discussing a contract extension. The negotiations appear to be still in the preliminary stages, but both sides want to complete. #Gohabsgo

At the time of writing, Allen’s contract is unofficial as it has been pretty soft since Weekes’ announcement last night. Could it be signed in the next few days? I do not know. We will see over time as well as over time.

Does this mean that the Canadiens have plans to make Jake Allen their number 1 goalkeeper? In the long run, I don’t think so. In my opinion, it is above all the idea of ​​ensuring a certain long-term stability that is attractive.

“Carey’s knee did not respond positively to any treatment after surgery. We are not very optimistic. […]”

After all, more than ever, we know Price’s knee is in bad shape. No further confirmation was needed, but let’s say that yesterday the DG of the CH nevertheless clarified the horizon.

And this, the fans are ready to accept: we have to prepare after Carey Price.

Little reaction to yesterday’s announcement in Carey Price: “Prove that people are resigned,” he believes @jp_tvasportshttps://t.co/OaMAZOzTsm

Extending Jake Allen’s contract would be great news for me. How come?

Because even though Kent Hughes said earlier this year that CH didn’t have a number 1 goalkeeper in their organization behind Carey Price, Allen is a luxury insurance policy.

Not knowing his future goalkeeper, the CH seems to want to bet on Jake Allen as an assistant.

And that’s great news because in today’s NHL, you need a number 2 who isn’t like Kevin Weekes back then, a guy who will play like five games behind Martin Brodeur. .

Allen, is a guy that Marc Bergevin took the year he made at run for the Cup. He is a goalkeeper who has immediately extended for two years, until 2023.

Allen is a goalkeeper for whom he went out of his way to keep him. This includes letting Carey Price be free as air (at his request) in the 2021 expansion draft.

Allen is a goalkeeper who has never been sold despite the lack of goalkeepers in the transfer market. Its market value had to be good, right?

Allen is a valuable teammate who always gives CH the chance to stay in the game, who never complains about his use (be it number 1 or the reserve in the playoffs).

Allen is a player that the new management (obviously) also wants to keep in the medium term. And clearly, if he still signs in this condition, it means he loves Montreal and is ready to work to get the Canadian back together, right?

That’s why I don’t understand who wants to send him elsewhere instead of extending the contract.

Unless a club makes an irresistible offer, Jake Allen should stay → https://t.co/WbnLcU7bBx

After all yes, the CH wants to lose, but explain to me how the Canadian (buzzword among the CHs) could develop if the young defenders were to play on their heels for lack of stability behind them?

I have absolutely nothing against Samuel Montembeault and Cayden Primeau, but without Jake Allen he would lack stability in front of the net … and as André Tourigny recently said, no one develops well by being crushed.

What follows will be interesting with the Canadian. How come?

Because the Canadian, if he decides to extend Jake Allen’s contract, will have a # 2 goalkeeper in the future, but nothing is yet clear regarding the position of the # 1 goalkeeper.

During the “Jewelry, not jewelry” segment, @erichoziel And @jmdufaux commented on the situation of the goalkeepers at Canadiens.

If Allen is there, the Canadian will have three goalkeepers under contract. After all, Samuel Montembeault is under contract until 2024 and Cayden Primeau, until 2025. And from 2023 he will no longer be able to benefit from the waivers and will have to be in Montreal.

I guess the plan is to keep Allen in the long run to finally see him take Primeau under his wing. Therefore, Martin St-Louis could modify Allen’s workload according to Primeau’s needs.

And this is how we can see if Primeau has what it takes to be a number 1.

For this to be optimal, this implies that a veteran is there to support the young American. What’s the point of trading Jake Allen, who’s fine in town, to try and find another Jake Allen-style veteran to drive Primeau?

Obviously, all this news obliges us to question Samuel Montembeault. From next year, will there be too many for Cayden Primeau’s potential arrival in the city?

The Canadiens could trade it next summer or push it away from waivers, but don’t forget that within a year the plan has time to change 19,263 times. Having it currently is more than a nice insurance policy.

Note however that I don’t see CH going there with a Montembeault / Primeau duo because the presence of a veteran is, in my opinion, too important. But again, let the time pass a bit and we’ll see, depending on the upcoming season, what to do.