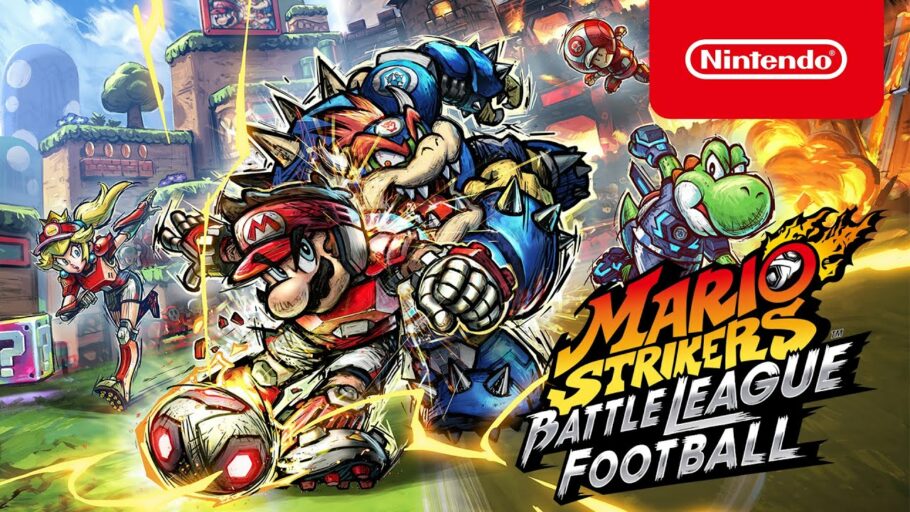 When Nintendo lends Super Mario to other development studios, very good or very bad things can happen (we all have in mind the terrible 1994 Hotel Mario released on Philips CDi). That said, Next Level Games, now owned by Nintendo, knows how to make great games with the plumber brothers, as they demonstrated with Luigi’s Mansion 2 (Luigi’s Mansion Dark Moon) and Luigi’s Mansion 3. show once again with the return of their 2005 GameCube – Mario Football series launched.

We were able to play the new Mario Strikers Battle League Football for Nintendo Switch both locally and online thanks to a code provided by Nintendo Canada and in this review we tell you everything we thought about it.

This Mario sports game is unrivaled: Mario Strikers is a series sponsored by Nintendo Next Level Games, the Canadian creators of Luigi’s Mansion. This means that they have some freedom to bring their own original touch to these video games, which the gaming community really appreciates.

Mario Strikers’ aesthetic has always been special. Some would say it’s much rougher than classic Mario games with heavy pencil strokes and massive black outlines. It could have gone the same way with games like Super Smash Bros. Ultimate, but here Next Level Games gives us the interpretation of him and isn’t afraid to make Mario and his cronies much more aggressive than usual.

In terms of game modes, Mario Strikers Battle League Football doesn’t have a story mode per se. As in Mario Kart 8 Deluxe, the action consists of winning all the cups available in the game, for a total of 6 standard cups. This may disappoint some who were hoping for more visible advice or some other form of motivation. But we must remember that it is above all a sports game and, as we have seen in recent years, it is precisely the multiplayer mode that carries such a game on its shoulders.

Sport in Mario Strikers Switch is also not football (or soccer) per se, although it is called Mario Strikers Battle League Football. The sport of the game is called Strike and it combines handball, soccer and wrestling, with rules that you will learn quickly.

The initial player roster ends with ten characters, including famous characters like Mario, Yoshi, or Waluigi, with some notable unexplained absences like Bowsy or Daisy. The problem is that it is not possible to unlock any additional characters by playing as they did in the past. Now all that remains is to wait for free updates at the discretion of the developers to see other well-known faces. We will not hide our disappointment in discovering such a poor list of characters …

At first glance, Mario Strikers Battle League Football has a great personality. Something that Nintendo didn’t dare to do and Next Level Games managed to perfect.

The good taste of next-level games

And one of the things that gives more personality is the artistic vision. Luigi’s Mansion 3 has, for many, the best animations in a Nintendo video game on Switch. Mario Strikers benefited from the good work of the animators at Next Level Games, making the protagonists of Super Mario more expressive than ever. And with bolder animations than ever.

The video game features a three-dimensional aesthetic similar to that found in other Mario games, with a slightly darker, but equally recognizable cut. Things change through a series of visual effects that serve to highlight characters and scenes. To make the movements spectacular, a special filter was created capable of highlighting the characters, putting black borders on them and recreating a drawing, a moving print (as in Okami for those who remember it). All of this running in the game engine.

While the performance isn’t perfect, we were surprised at how the Switch is able to switch between art styles in the middle of a match, without interrupting the flow and with the look and feel of an animated series. Using this style seems to us to be the great visual achievement of Mario Strikers: Battle League Football. This gives it personality and sets it apart on multiple levels from titles like Mario Tennis or Mario Golf, which have a much more classic approach.

And not just because of its unique art style – the overall tone of the game is more aggressive and sinister than regular Mario games. It’s helpful for the plumber to get away from it all, although it may not be to everyone’s taste.

Beyond the technical analysis, we have seen that in Mario Strikers during games, when the camera is positioned at the top, it has a fixed yield at sixty frames per second despite very punctual drops when there is a lot to do on the screen, but nothing serious. Yes, performance drops as the camera drops into the field and more detailed characters and environments are seen. The frame rate can also drop below 25. What we found most important is that while there are some slowdowns, they only occur in transition scenes where they don’t affect gameplay.

We will be able to choose from a variety of stadiums in which to compete, increasing their chances as each team chooses the aesthetics of the midfield. The concept is curious, but in practice we have not noticed a great aesthetic difference between the stadiums, even when they are combined.

The music in the game has both good and bad: while there are great remixes of music from various Nintendo video games like Luigi’s Mansion or Donkey Kong, the original tracks are uninspired, especially those from the game menus which are bland and repetitive.

All the characters reprise their usual voices with a few variations to match their cool new animations.

The next level games increase in Mario level

If we have already told you that Strike is a mix between football, handball and wrestling, it was 100% true: we will have a ball that we will have to put into the goal, even with our hands, while we will hit to the left and right between the players. A little silly, right? Well, know that it is a feature of Super Mario sports games.

Each of the two teams in the game is made up of four characters and the goal is to score as many goals as possible in the opposing team’s goal. For this we can use all the tools at our disposal, from punches and kicks to feints and super powerful hits or special hits and hyper strikes. After all, and like in a good Mario game, magic and fantasy take precedence over realism.

It is safe to say that this is the most complicated Mario sports game to play. But also the most complex and the most satisfying once you master it. We have a number of simpler moves that can get tricky if done at some point in the game. Timing will be key if you want to master Mario Strikers well.

Solo can only control one character at a time, but we can switch between them at any time. This creates huge differences in how you can play alone or with other people.

We also think it’s the hardest Mario sports game ever made. Artificial intelligence makes diabolical moves that will complicate our task, especially during the first few games when we are still a beginner.

Each character has unique stats that make him different, as well as special moves called Hyper Strike that set him apart even more. This is where the cruelly limited number of characters penalizes this production even though their stats can be changed via equipment that we can purchase in the shop. This will be the main content to unlock, as well as the objectives in the form of cups that we can get by completing each tournament.

At best, you could hit the game’s credits within hours, even though there is a lot more content behind the Cup mode.

Probably the most important thing about Mario Strikers Battle League Football is its competitive mode. This is where your Nintendo Switch Online membership will shine.

It is possible to join or create your own club with other Mario Strikers players, and then compete with other groups in game leagues.With this option, it is very clear that this title is very much about online and multiplayer competition.

Besides the competition itself, playing with friends is a completely different experience in Mario Strikers. Going from controlling all players to one means being in constant contact with our teammates to plan strategies. The game therefore supports Nintendo Switch Online voice chat.

We are happy to tell you that we had no problems playing online, no lag or slowdowns, being a satisfying experience like playing offline.

Up to eight people can play online, with four pairs of Joy-Cons and two console players. But if we play against strangers in Club mode, this number can go up to 8, regardless of the number of consoles.

In the same console the number is kept, so with 8 Joy-Con, up to 8 people can enjoy it at the same time. The problem we’ve seen here is that it’s not an accessible game like Mario Tennis Aces, Mario Golf Super Rush, or Mario Party Superstars might have been, and it takes quite a bit of learning to understand how it works and master the controls.

We expected neither more nor less from the return of Mario Strikers Battle League Football, which adapts to the modern times of Nintendo by betting on a good enough online gaming system and offering interesting playable novelties.

While the playable character customization system is something that only the most advanced players will take advantage of, the changes to the controls with progressive difficulty options provide the necessary complexity to the saga.