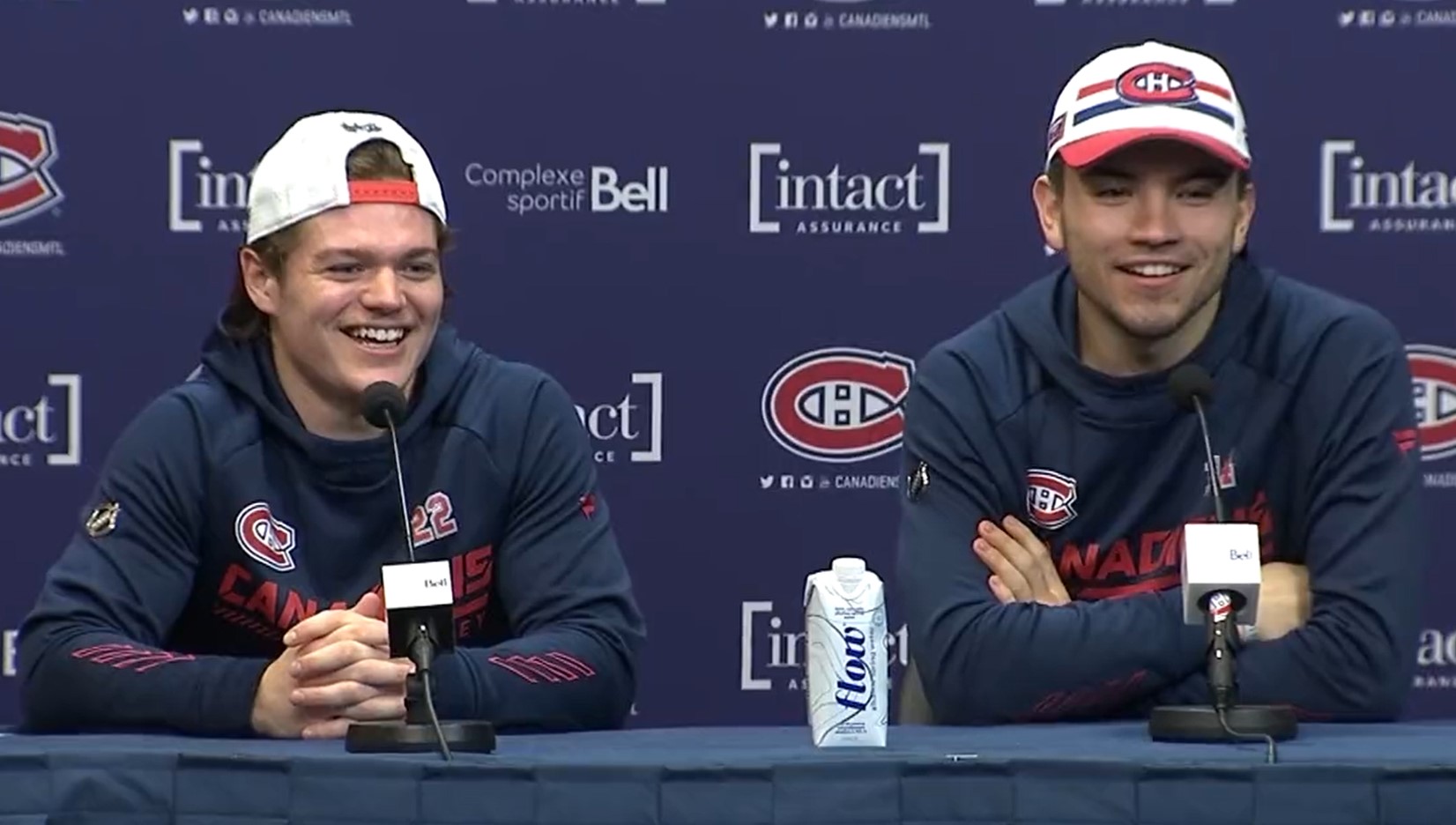 Nick Suzuki and Cole Caufield took part in this charity event weekend in Montreal. Caufield will leave the city for a few weeks after the Montreal Grand Prix, while Suzuki will spend his summer in 514. Or on the south bank, in 450 …

The event was attended by some journalists who did not hesitate to ask some questions hockey to the young Montreal duo.

Suzuki and Caufield see themselves playing very well alongside young Juraj Slafkovsky if it is he whom Martin Lapointe and Nick Bobrov identify as the best player of the 2022 vintage.

A first trio made up of young people aged 18, 21 and 23? This is where you KNOW that we are under reconstruction, hehe.

Well, Nick Suzuki said something else interesting last Saturday. Number 14 (and future team captain?) Would like to see Cole Caufield get along well with the Habs in the long run. Recall that Suzuki signed an eight-year ($ 7.875 million cap hit) deal with CH last October, just before Marc Bergevn was replaced by Jeff Gorton (and possibly Kent Hughes).

Nick Suzuki- “There is no better place to play than Montreal. I hope Cole signs a long-term deal with us. ” pic.twitter.com/KXPPv1RSH7

“There is no better place to play than Montreal. I hope Cole will sign a long-term contract with us. – Nick Suzuki

The duo Suzuki-Caufield it does not want to be dismantled. The two children they’ve had enough of an end to the campaign and are hoping to be coupled with each other for several years. No, Caufield will never be sent back to Laval again!

First, it remains to find the perfect wing to complete them. Ideally, this winger will be tall, strong and sturdy … and he will be able to play hockey. For now, Josh Anderson ticks a few boxes, but he’s not the perfect winger to complete numbers 14 and 22. Juraj Slafkovsky? Perhaps…

The Canadian will have to decide in the next 12 months whether to offer a bridge contract (two or three years) or a long-term contract (six, seven or eight years) to the little American striker.

Suzuki hopes it’s a long-term contract. If so, will Caufield get more money than Suzuki?

To sign Caufield for more seasons, Kent Hughes and Jeff Gorton will have to find ways to free up dollars under the salary cap so they can extend Caufield’s contract. Very few major contracts will expire next summer with the Canadian.

– A third consecutive title for Lightning?

It will be a dream finale … and another title for Lightning https://t.co/pt0EUQGNaX

– Hockey Canada will have to explain itself (and could become ugly).

HOCKEY | At the House of Commons https://t.co/I5GemXclYm

– Will Kaiden Guhle follow in the footsteps of Nick Suzuki, José Théodore and Claude Lemieux, or those of Duncan Milroy?

Habs hopes to be named playoff MVP in one of Canada’s 3 leagues:

– He probably won’t be (much) to Montreal.

Kristopher Letang would be the priority of the Penguinshttps: //t.co/O7Sl8gXFUE

– JF Houle puts pressure on the Thunderbirds … and opens the doors to Joshua Roy.

“The pressure is totally on them. Let’s go have fun tomorrow. If we play a patient match like last night, we will be in good shape ”- JF Houle

I asked Houle if he would be tempted to replace the injured Ylönen with another striker. The coach replied in the affirmative.

Reading between the lines, there will be a Roy who will play tomorrow. It is a question of knowing which one.

– Difficult win for DO.