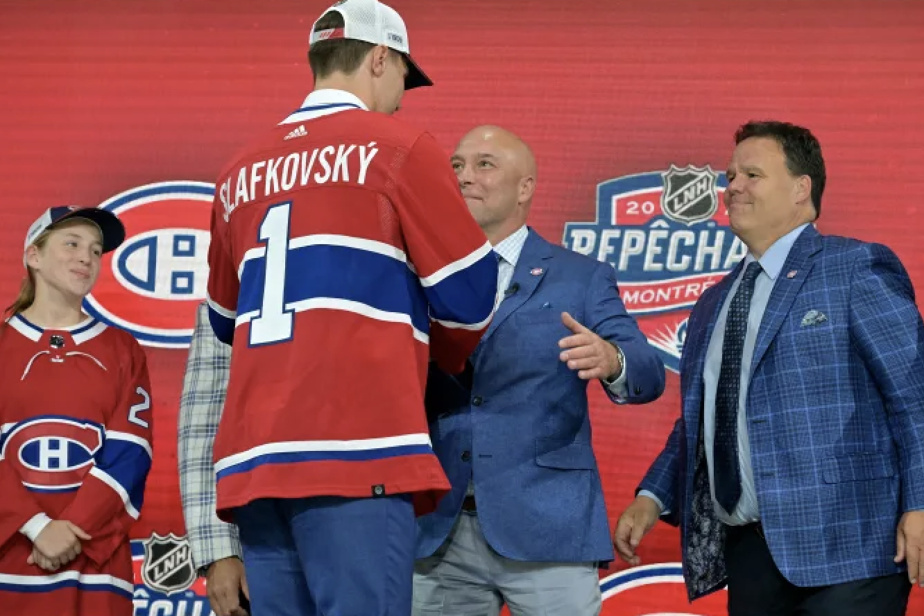 Kent Hughes was a privileged witness at the Molson Center in June 2009, when the crowd began chanting Louis Leblanc’s name … even before Trevor Timmins approached the microphone.

It would therefore have been unthinkable for the Canadian to avoid the local hero in favor of an obscure player from a Massachusetts high school. “There would have been a riot in Montreal if we had preferred Chris Kreider to Leblanc,” said Timmins a few years later.

Thirteen years have passed. Kreider is coming out of a 52-goal season, his seventh year of over 20 career goals. Jeff Gorton, then GM of Rangers, offered him a $ 45 million contract for seven years in 2020. He also had time to ruin Carey Price’s knee.

Leblanc has already been retired for seven years. He played 50 NHL games, got 10 points. Montreal sold it to the Anaheim Ducks in June 2014 for future terms. CH would have gotten a pick in the fifth round if Leblanc had played at least 15 games with the Ducks, but he was never called back by the minors. The Canadian therefore received nothing.

Hughes is well placed to remember this complex evening for Canadian management. He was sitting next to the young man. Before Leblanc dumped him a year later in favor of Pat Brisson.

Most fans claimed Shane Wright for number 1 on Thursday night. Many fans also showed up at the Bell Center with the youngster’s number 51 shirt. Most of the lists of specialists placed Wright at the top of the list. A major threat to the Ontario throne, Slovakian Juraj Slafkovsky, was even greeted with some boos as he walked the red carpet upon arrival at the amphitheater.

The Canadian general manager certainly recalled this June 2009 evening of the last few weeks. It still took nerves of steel and a lot of audacity, in his first draft as GM, in Montreal on top of that, to go against popular favor. Now you know what Kent Hughes is made of.

Shane Wright, an exceptional player at 15, was not only shunned by the Canadian, but was ignored by the Devils and the Coyotes, before ending up in Seattle, holders of fourth pick.

It took the giant Slafkovsky less than thirty minutes to seduce the Bell Center audience, which ultimately gave him a superstar-worthy welcome. He will never forget that evening.

Juraj Slafkovsky has always been considered one of the good candidates for this year, but his score rose further after the Olympics, where he scored seven goals in as many games. His caliber was however weak at these Games, deprived of the NHL players.

More telling are his nine points in eight World Cup matches. His detractors of him argue that he did not produce against Finland and Canada, but rather against Italy, France and Kazakhstan. And the statistics support them.

But when you look closely in those games against Finland and Canada, you can see a powerful 6ft 4 and 220lb winger who multiplied scoring chances (five shots against Canada and four against Finland), a winger who, despite having turned 18 since April, he has won most of his battles down the ramp, never hesitated to charge into the opponent’s net and put his excellent shot to good use.

Slafkovsky was consistently pitted against defense pairs of Miro Heiskanen and Esa Lindell (of the Dallas Stars) against Finland and Thomas Chabot and Zach Whitecloud against Canada.

And even if the tournament could have entered the legs of an 18-year-old boy after several fierce matches, coach Craig Ramsay, who saw the snow, did not hesitate to exploit it for more than 20 minutes during the last match, in i quarter-finals, against Finland, the second most used player of the team, all positions combined.

Slafkovsky has its flaws. He still has some work to do figuring out the game when he’s not in possession of the puck. CH recruiters wanted to make sure he was a good student. Obviously they were convinced.

His low production in Liiga this winter, only 10 points in 31 games, leaves some perplexed. But he was playing for an ultra-defensive club, on a large skating rink, not ideal for a forward like him, and the leadership of TPS Turku had no interest in providing time for a young foreigner. veterans and players who grew up within his organization.

We ultimately decided to use him more after the Olympics and he scored four goals in his last ten games (only one in his first 21 regular season games) and scored seven points in 18 playoff games at age 17, in the fifth ranking of team counters.

The top two New York Rangers centers last season, Mika Zibanejad and Ryan Strome, had both fallen out of favor with their bosses when Canadiens’ vice president of hockey operations, Jeff Gorton, then general manager of Blue Shirts, performed the l ‘acquisition.

Despite his 51 points in 81 games in his fourth season in the NHL, at the age of 23, we no longer believed too much in Zibanejad, sixth overall pick in 2011, in Ottawa. At least we also added a second round pick to Rangers’ bid for a nearly 29-year-old center, Derick Brassard, in July 2016. 16 points in 19 playoff games a year earlier.

Acquired just over two years later, Strome, the Islanders’ fifth overall pick in 2011, had already been traded from Long Island and had just had a 34-point season in Edmonton at the age of 24. Gorton offered the Oilers Ryan Spooner, who had just had a brief hit, in exchange.

We wish the Canadian just as much success with Kirby Dach. Zibanejad has 206 points in his last 194 games in New York, Strome 162 in his last 200.

The Canadian is obviously taking a calculated risk with Dach. The Chicago Blackhawks wouldn’t have traded a 21-year-old offensive center in the midst of a rebuild if things went well.

But in the Canadian’s assessment, Alexander Romanov, despite his exuberance and tenacity, would never have become a top-pair defender in a top team, let alone an attacking defender. Of course we would have held him back if we could have, but we realized there was work to be done in terms of deciding with the record.

Congestion also in defense with the imminent arrival of the first choice of the team in 2020, Kaiden Guhle, also robust to want and superior in all respects to Romanov according to the management of the team. Not to mention Jordan Harris, a slender defender, and 6-foot-4 220-pound giant Arber Xhekaj, 21, who made a splash in the playoffs in the junior ranks, and Jayden Struble, another burly lefty and rough-and-tumble defender.

We could therefore afford to sacrifice an established young defender to bet on a 21-year-old gifted center, a rare commodity within the organization. Dach, like Slafkovsky, stands over 6 feet 4 inches tall. We thus get a better balance in attack in terms of size with Cole Caufield already on the pitch and possibly Sean Farrell.

Dach was drafted in third place overall in 2019, after Jack Hughes and Kaapo Kakko, twelve places ahead of Caufield. He is a year younger than Romanov and also a few weeks younger than Caufield.

His selection in the top three was a bit of a surprise, but Dach made it to the NHL at the age of 18. He amassed 23 points in 64 games in his first season, a similar production to Alexis Lafrenière and Jack Hughes in their first year.

Dach would have been the undisputed star of the Canadian youth team in January 2021 at the World Cup, he had even been named captain, when a wrist injury forced him to retire.

He seems never to have recovered, but still amassed 10 points in 18 games when he returned to play in March 2020.

But the youngster, who turned 21 in January, had a season to forget, like many Hawks players, with 26 points from 70 games last year.

Dach scored 13 points in his first 29 games in 2021, played between 18 and 23 minutes per game, but later it all fell apart. The change of coaching may not have helped.

Despite his limited offensive production, he is already a very responsible center in the defensive phase, who will not take shortcuts before fattening up his record, who has a good skate for a player of his size, a hard worker who plays very dynamic.

Before signing this amazing six-year contract extension (for 36 million) with the Pittsburgh Penguins, given his 35 years, Kris Letang thought about the possibility of joining the Canadian.

“Not only to go home, but also for the organization that has a lot of history,” he told reporters. As a child I often went to the Bell Center, I experienced those emotions. Also tonight, to hear the crowd … You dream a little bit in your head. It’s a team I’ve always admired. ”

Clearly, the Penguins had no intention of rebuilding. More details in the text by Simon-Olivier Lorange.