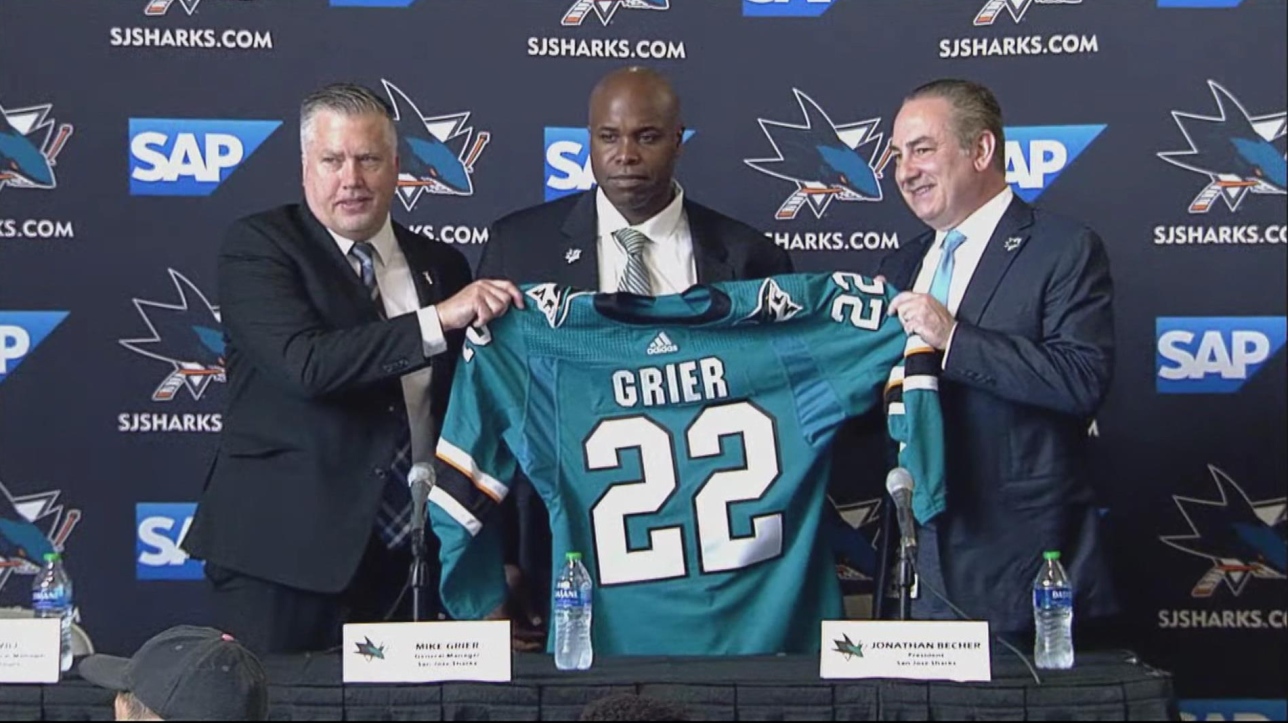 He spent three of his 14 NHL seasons with the Sharks from 2006 to 2009 and has spent the past decade holding various coaching and scouting roles in the league. Until recently he was a consultant for hockey operations with the New York Rangers.

Grier’s nomination was ultimately selected after a lengthy search that included dozens of candidates and spanned nearly three months since Wilson announced he was stepping down on April 7. Wilson had retired in November.

“It means a lot to me,” Grier said when he was introduced to the media on Tuesday. I don’t take it lightly. I am aware that there is a part of responsibility that comes with this appointment. But I’m ready for the challenge.

“The way I behave and the way this organization behaves, I believe we will do good things and pave the way for those who follow. “

“I hope you will serve as an inspiration to many and that you will not be the last,” club president Jonathan Becher told him.

The breakthrough hiring comes less than a week after interim general manager Joe Will announced that coach Bob Boughner and three of his assistants would not be returning next season. Will explained that he made this decision two months after the end of the season to give free rein to the new general manager.

Grier’s job will be tough in San Jose, rebuilding for the first time in franchise history a team that missed the playoffs in three consecutive seasons.

Grier will have to get to work quickly, hire a new manager and take care of Thursday and Friday’s draft and free agent market next week. The Sharks have the eleventh pick in the first round.

Grier added that he was not interested in a full club rebuild, but that he may need to take a step back to move forward better.

The 47-year-old comes from a family of successful sports leaders. His brother, Chris, is the general manager of the NFL’s Miami Dolphins, and his father, Bobby, was a longtime coach and board member of the New England Patriots and the Houston Texans.

Instead, he opted for hockey, playing 1,060 NHL games with the Edmonton Oilers, Washington Capitals, Buffalo Sabers and Sharks. He has 162 career goals and 221 assists.

Grier says he’s been preparing for the role since he was 10, due to arguments he has had with his brother and father. “I wanted to talk about football; they wanted to talk about hockey. I rely on them a lot. They have a different perspective because of the sport, but I trust their opinions. “

“Growing up, we talked about the challenges of organizing workouts and things like that at meals,” he recalled.

The NHL emphasizes diversity, with several women also gaining opportunities in leadership positions and on the coaching staff.

The Arizona Coyotes announced Tuesday that Kelsey Koelzer and Kori Cheverie will act as assistant coach André Tourigny during the team’s development camp next week.