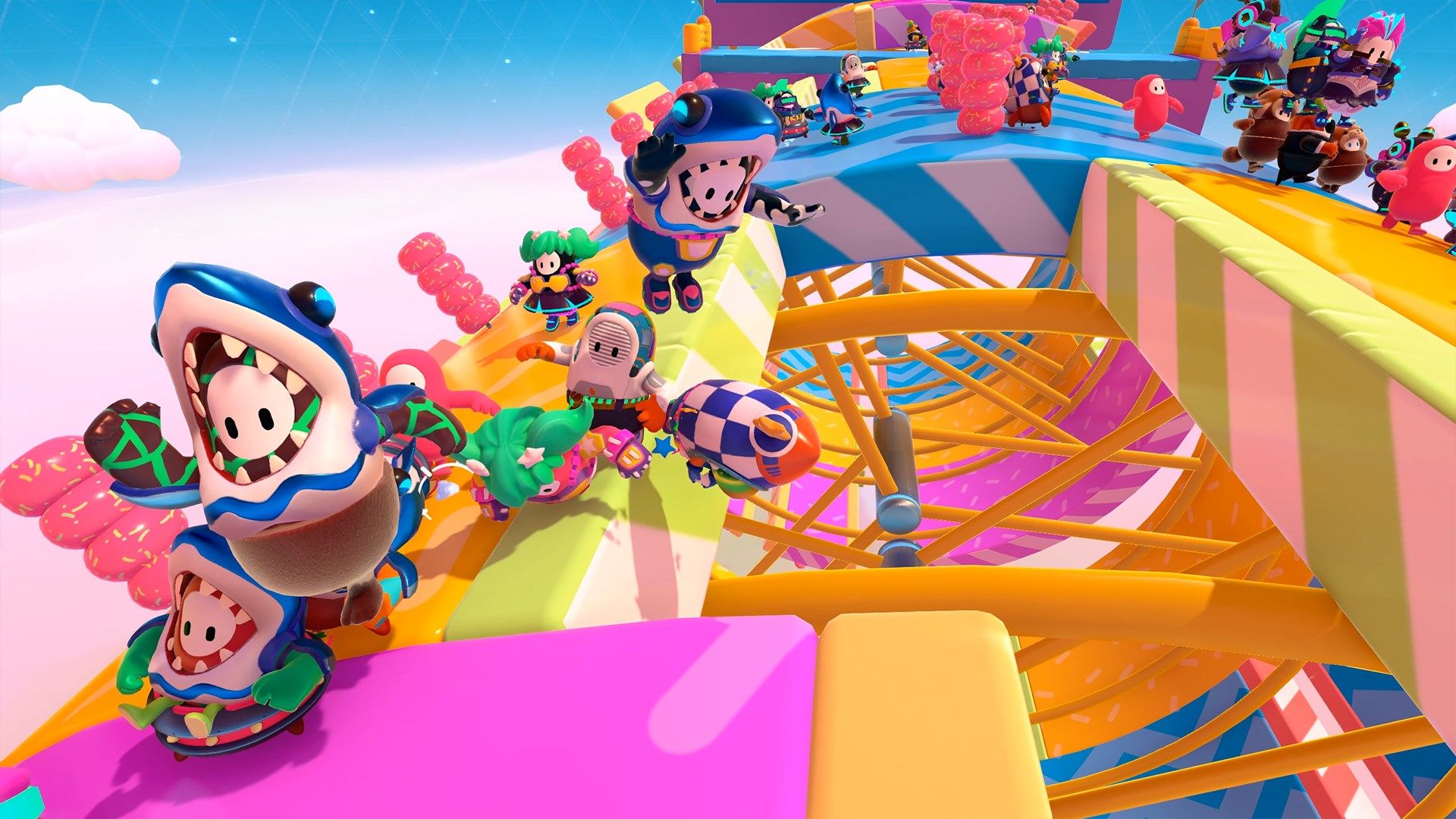 The past week was characterized by many announcements made during the Xbox & Bethesda Games Showcase and a few major releases have arrived on Xbox. While the major events in June are over, new games are still coming this week. Although the period is quite favorable for outdoor activities, the heat waves observed at this time will perhaps push us to stay indoors longer than expected and what could be better than new games to keep us busy in the cool of the House ? Scheduled for the week, Fall Guys, the Shadowrun trilogy or even Naraka: Bladepoint.

In Broken Mind, you play Agent Frank Morgan, a detective with a dark past. You will need to investigate the disappearance of a teenager who was kidnapped during a live Internet broadcast. Investigations accelerate when Laura’s phone emits a signal a few kilometers away, in the middle of the forest!

A brand new Elder Scrolls adventure awaits! Join over 20 million players and immerse yourself in a knightly culture. Protect the legacy of the British and explore an unreleased part of Tamriel in The Elder Scrolls Online: High Isle, coming to Xbox Series X | S and Xbox One on June 21.

You are invited to dive in and dodge your way to victory in the goofball pantheon. Newcomer or professional? Alone or in a group? Fall Guys brings you ever-changing entertainment and loads of hilarity. The only thing more important than winning is to look as ridiculous as possible while doing it. Grab the most ridiculous costume you can and get in line – the show is about to begin!

The prince of the Milky Way – The vampire star – June 21

A visual novel about an abusive relationship, idealization and intimacy. Experience a summer of dysfunctional love through branching scenarios, twists and special mechanics where you choose which senses to use with your boyfriend. In these moments you will learn more about him, his personality and his past, which will make you question everything.

The Shadowrun trilogy includes three cult tactical RPGs set in a dystopian cyberpunk future where magic has awakened, giving birth to creatures of high fantasy. Originally created as a tabletop RPG over 30 years ago, this one-of-a-kind setting has garnered a huge cult following over the past three decades. Shadowrun Returns, Shadowrun: Dragonfall – Director’s Cut and Shadowrun: Hong Kong – Extended Edition will also be available for purchase on the Xbox Store. Playable on cloud and console.

Drunken Fist’s drunken antics are back with brutal revenge as you play as a drunken rocker in Drunken Fist 2: Zombie Hangover! You wake up in a city filled with hordes of the undead and it’s up to you to stumble across the streets and crush your zombie opponents with the fearless inhibition that only drunkenness can provide.

Play as a young rescuer starting her career. Armed with a trusty ax and a high-pressure fire hose that doubles as a jetpack, Firegirl answers emergency calls throughout the city. Will Firegirl be able to rescue all the civilians trapped in every fire?

A dark, solitary, evocative and non-linear action RPG. Inspired by the works of Tsutomu Nihei and Lovecraft, Redo! is the game of a young girl who tries to find what remains of a dystopian world invaded by biomachines. Presented in a non-linear and open format, the game offers a dark and mysterious narrative within a dismal and vast and interconnected decaying city. Relive the classic adventures of Sonic The Hedgehog, Sonic The Hedgehog 2, Sonic 3 and Sonic CD in the new remastered version of Sonic Origins! From the iconic Green Hill Zone to the evil Robot Egg of Death, you will retrace your memories to foil Dr. Robotnik’s sinister plans in high definition!

A platform game, a physics puzzle game and a delivery job simulator all rolled into one. You have to deliver pizzas, get paid and survive this day. If you don’t have enough money, you will lose your home, your food and your life, so be careful and work hard!

Armed with your investigative skills and the tools of the trade of Blade Runner, you will be immersed in a world that lives and breathes around you thanks to revolutionary lights and visual effects. Your survival will be tested in the richest game environment ever created.

Six years ago, the right half of a corpse was discovered. The left half was never found … until six years later, completely fresh and with no signs of decay. Now, Special Agents Mizuki and Ryuki, along with their AI partners Aiba and Tama, are tasked with solving the bizarre serial Half Body Murders as they uncover the mysterious conspiracy known as the Nirvana Initiative. .

Choose your favorite illustration and play its puzzle! Select the difficulty of all the puzzles by choosing from 3 dimensions: Easy (63 pieces), Normal (130 pieces) and Hard (300 pieces). 10 Piapro Public Collaboration Songs were created especially for Hatsune Miku Jigsaw Puzzle for you to enjoy while playing.

Three games from the challenging puzzle-platforming series, Him & Her, Her Challenges and Him & Her 3. You can move your character in a side scrolling perspective and you can also jump at any time. However, when you’re not jumping, you approach the platforms and the whole level turns depending on which direction you move the ledges.

Explore the mysterious and breathtaking battlefield of Morus, ravaged by war, with a striking aesthetic inspired by the legends and history of the Far East. Enhance your play style in an ever-changing multiplayer battlefield, featuring 1v1 duels, arenas and 60-player battles. Customize and master a growing roster of legendary heroes, each with their own deadly abilities, endings and play styles. Playable on Cloud, Console and PC.

Explore the mysterious and breathtaking battlefield of Morus, ravaged by war, with a striking aesthetic inspired by the legends and history of the Far East. Enhance your play style in an ever-changing multiplayer battlefield, featuring 1v1 duels, arenas and 60-player battles. Customize and master a growing roster of legendary heroes, each with their own deadly abilities, endings and play styles. Playable on Cloud, Console and PC.

A turn-based strategy set during World War II that describes the war between the United States and the Empire of Japan in the Pacific Ocean with extraordinary historical accuracy and attention to detail.

Urban Flow is a game about the subtle beauty of city streets filled with cars moving in perfect harmony. But such an order does not happen alone. The city needs you to check the traffic lights and keep everything running smoothly. This means no accidents, no traffic jams. Everything will be fine if you stay focused.

A boy returns to his country house after spending six months in the city, to discover the unimaginable: his elderly grandmother has turned into a little girl!

Six years ago, the right half of a corpse was discovered. The left half was never found … until six years later, completely fresh and with no signs of decay. Now, Special Agents Mizuki and Ryuki, along with their AI partners Aiba and Tama, are tasked with solving the bizarre serial Half Body Murders as they uncover the mysterious conspiracy known as the Nirvana Initiative.

A is a wacky, old skool, atmospheric, and compelling FPS adventure that puts you in the middle of conflict on a remote island. Discover a story of profound philosophical significance or work your way through the conflict using two weapons. Do both. Create potions and ammo or keep what the environment offers you. Your turn. The Aventum awaits you.

Newfound Courage is an action-adventure storytelling game about a gay hero who falls in love with his best friend as the world crumbles around them.

Pure arcade, pure speed, pure adrenaline. Frantic driving, without even having time to blink. You will feel the essence of arcade racing oozing from your pores and your adrenaline pumping nonstop.