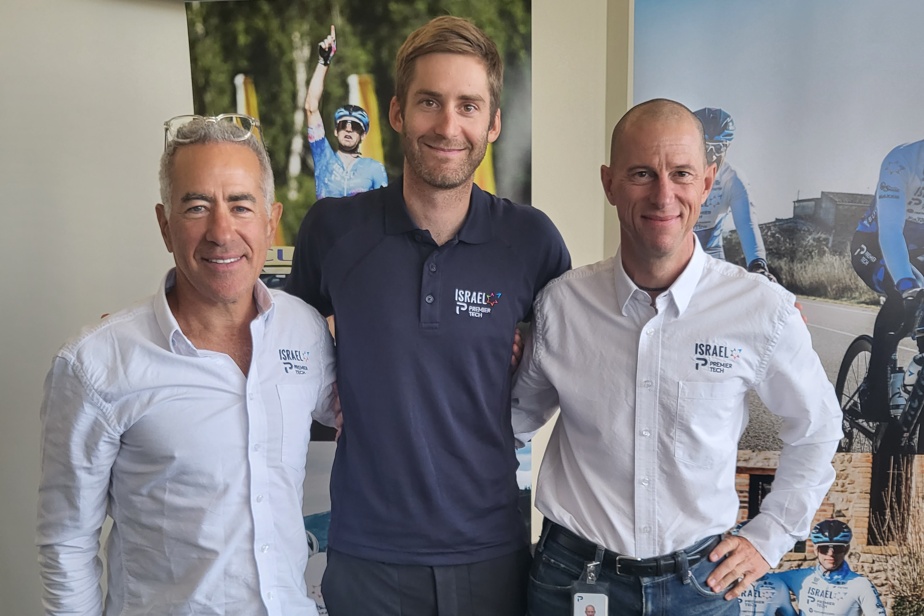 (Rivière-du-Loup) With its five or six large buildings of decidedly modern architecture, one has the impression of landing on university grounds.

The venue is also called the Premier Tech Campus. Rather, it is the “world headquarters” of the multinational Rivière-du-Loup, which specializes in horticultural and agricultural products, computer systems, water and the environment, 3D visualization and so on.

But the shop that offers cycling clothing and the jerseys hanging on the wall at the employee entrance remind us that we are really entering cycling territory.

Cycling was even more in the spotlight on Wednesday for the 1,400 “team members” working on the Campus. “Mr. Hugo Houle”, presented by Premier Tech CEO and majority shareholder, Jean Bélanger, was about to mark his historic Tour de France stage win.

Arriving for lunch, the hero of the day was later joined by six Israel-Premier Tech teammates who will accompany him to the Grands Prix Cyclistes de Québec and Montréal on Friday and Sunday, including Quebecer Guillaume Boivin.

After a dinner under a marquee where all the “team members” were invited, the bravest were able to socialize with the runners for the last real training before the weekend races.

After crossing Rivière-du-Loup, the group followed the river to Kamouraska, where coffees and pastries awaited the cyclists. The seven professionals then had to travel to Saint-Jean-Port-Joli before showering and returning to Quebec in vehicles.

Earlier in front of reporters, Houle said he did not anticipate major changes despite his newfound fame.

“I am particularly happy to be here, to experience the Grand Prix,” said the 23rdAnd du Tour, surrounded by Bélanger and the owner of the formation, Sylvan Adams.

“I’m curious to see what this year will be like after the good press I had during the month of July. Obviously the preparation remains the same. I am happy to enjoy the beautiful atmosphere and to show people at home what I do all year round in Europe. ”

Extra pressure? Okay, the The main stakeholder seemed almost surprised by the question, recalling being surrounded by a “very, very solid team” for these events which could be decisive for the status of the Canadian-Israeli side next year.

I wouldn’t say I have more pressure than in other years. Personally, I approach things the same way. Of course, I’m much more focused than for a race in Belgium where I go undercover and for which I don’t necessarily have expectations. I’d like to perform in Quebec and Montreal, that’s obvious. Sometimes the legs work and another day is less good. I did what I had to do, we’ll see what happens.

Aside from this whirlwind stay in Bas-du-Fleuve, the 31-year-old athlete turned down all other requests. This has included depriving himself of the visit of some relatives and friends, the only aspect of his growing notoriety with which the Munich resident copes less easily.

“I have not seen absolutely anyone. It is difficult to give everyone as much time as I would like. Requires some privacy. Now I have to make choices. I can’t be everywhere at the same time. This is the somewhat boring part of the story: don’t say more regularly. ”

That said, Bélanger, who became friends over the course of their relationship dating back to 2017, points out that the man hasn’t changed.

“People are proud and happy and Hugo gives them back. His state of him has changed, but not as he thinks, he unfolds and perceives himself. His way of interacting with people has remained the same. He is humble. It’s nice to see why there are people for whom it doesn’t take long for them to no longer fit in doors. ”

Since his return to his homeland at the beginning of last week, Hugo Houle has been able to better measure how much the success of July 19 has marked the imagination, even off the bike. His reaction to Foix’s finish, when he dedicated the victory to his late younger brother, left no one indifferent.

“It is certain that the story with my brother has touched many people. The emotion speaks for itself when looking at the photos and videos. There is the sporting side, but there is also a lot of the human side that has brought some pride to Quebec. ”

“I have a hard time saying: OK, that’s what I did. I saw it a little smaller … People still hailed the result this summer. ”

And it still resonates all the way to Bas-du-Fleuve, where a cheerful group of team members worked to remind him.

“Not healthy for sport”

Meeting Hugo Houle at Premier Tech was an opportunity for Sylvan Adams and Jean Bélanger to remember their “long-term” commitment to cycling, regardless of team status next year. Israel-Premier Tech risks returning to the second level if it fails to collect the necessary points to climb at least two steps to 18And placed in the WorldTeams by the end of the season. Adams had even offered his “personal guarantee” that this relegation would not take place before the Tour de France started. “We live in a situation that I would define as a case of force majeure,” defended the patron of origin of Montreal on Wednesday. COVID-19 has been particularly devastating to its workforce, which in July, for example, reached three out of eight runners in Paris. The owner explained that he is part of a group of seven teams “in the gray area of ​​the points” who are trying to reach an agreement with the International Cycling Union. “We are united on the issue. It would be very bad for any team to be relegated. It is not healthy for sports. So there are discussions. ”