Microsoft blocked the installation of Windows 10 and 11 in Russia from the company’s official website, Russian state media reported Sunday. Users in the country have confirmed that attempts to download Windows 10 result in a 404 error message. 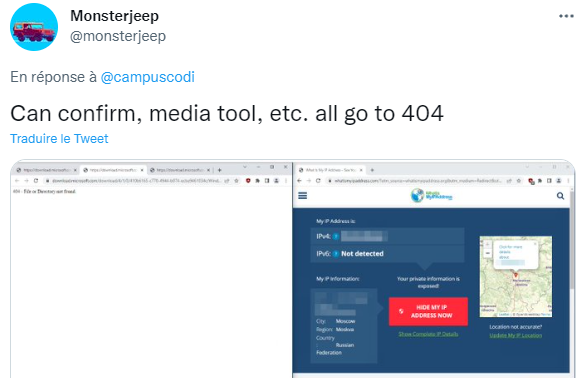 Tass (acronym for Telegrafnoe aguentstvo Sovietskovo Suza, a major Russian news agency, along with Rossia Segodnia and Interfax) reported that attempts to download a Windows 11 disk image (ISO) have been diverted to a Microsoft support contact page. However, the software is available with a virtual private network (VPN) to hide a computer’s location, as well as many other online resources:

Attempts to install Windows 11 and Windows 10 from the Microsoft website fail. The TASS correspondent was convinced of this.

An error occurs when trying to download a Windows 11 disc (ISO) image from the company’s website. “Error: There was a problem with your request. For assistance, please visit the Microsoft support contact page,” reads the message. However, if you are using a VPN, the download is performed.

If you try to download Windows 10, you also get an error: “404 – File or directory not found”. With a VPN connection, the download takes place.

According to statistics from Top10VPN, which regularly publishes data on the use of virtual private networks (VPNs) around the world, demand for VPNs has increased by an unprecedented 2692% in Russia, Instagram, Facebook and Twitter have removed access to apps. from position:

Demand for VPN resurfaced in Russia over the weekend of March 12-13, with Russian authorities banning Instagram in retaliation to parent company Meta for allowing claims for violence against the Russian military to remain on its platforms.

The official ban on Facebook and Twitter on March 4 had previously fueled demand for VPN services, sending it over 1,000% above baseline for two consecutive days.

The restrictions on Facebook and Twitter began on the weekend of February 26-27 with internet speeds when accessing these platforms so severely limited that they were rendered unusable, prompting Russians to increasingly turn to VPN services. Demand for VPNs increased during this week, and on March 3 it outperformed the benchmark by more than 750%

Our analysis of the Russian Central Register of Blocked Sites shows that the Kremlin has blocked more than 1,000 war-related sites since the invasion, including the Russian-language sites of BBC News, Deutsche Welle and Voice of America.

Russian authorities confirmed on March 15 that they had attempted to block VPN traffic and would continue to do so. 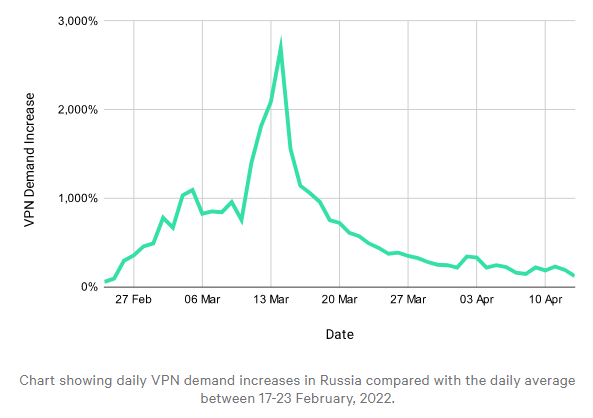 In early March, Microsoft announced that it would suspend new sales of Microsoft products and services in the country due to the invasion of Ukraine and in accordance with government sanctions orders.

A few days later, Ukrainian Deputy Prime Minister Mykhailo Fedorov called on the company to do more and block access to its products in the region: during 10 days of war, Russia launched more than 400 cruise missiles against the Ukraine: kindergartens, hospitals and residential areas buildings were destroyed. Microsoft, Bill Gates, Satya Nadella, help us stop it: block the access of Azure, Skype, GitHub from Russia. 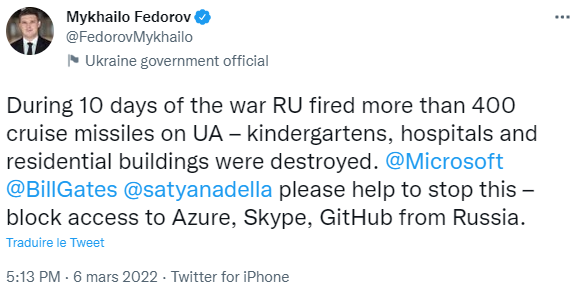 This month, Microsoft announced it was making substantial cuts to its operations in Russia, including reducing more than 400 jobs in Russia.

Here’s an overview of what’s been happening in the IT world since February 24th.

The following companies have stopped ads or removed the ability to mount them in Russia:

Some companies have restricted or labeled Russian state news channels, including RT and Sputnik, and Russian disinformation, or have severed links with Russian search engines:

The following companies have ceased sales in Russia:

The following companies have suspended their activities in Russia, stopped acquiring new customers or stopped their services in Russia:

Other companies such as Taiwan Semiconductor Manufacturing Company (TSMC), Nvidia, German SAP, Oracle, Nokia IBM, Cisco are also part of the lot. From the point of view of the Russians, the fact that TSMC has also joined the ban is likely to weigh even more. In fact, Russian semiconductor companies such as Baikal, MCST, Yadro, and STC Module design their own chips, but have them manufactured by the Taiwanese contract manufacturer.

Russia is also blocking the export of millions of tons of wheat from Ukraine, an action that EU foreign policy chief Josep Borrell has condemned as a “true war crime aimed at militarizing hunger”.

Russia would like to replace software from Microsoft, IBM and Oracle with open source solutions, cites security risks

Is the Russian military about to replace Windows with Astra Linux on its systems, the sovereign OS, the new symbol of technological independence?