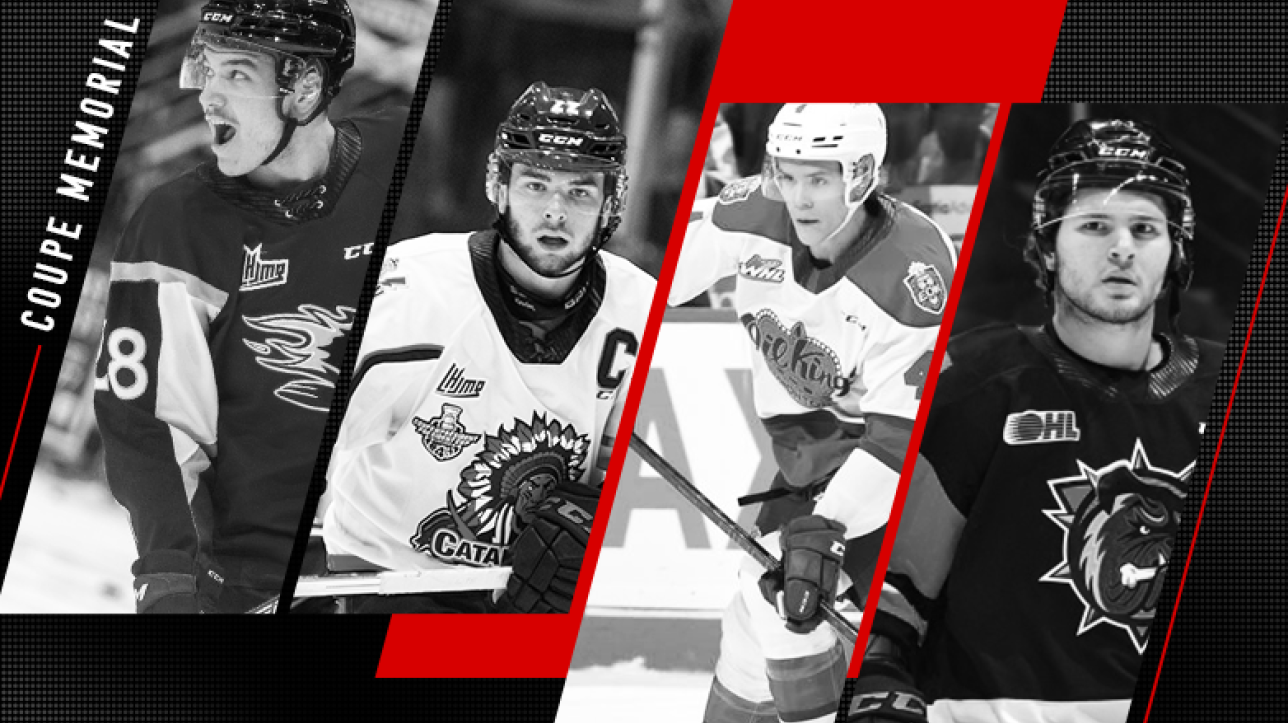 RDS and RDS Direct will show all nine Memorial Cup games from June 20-29.

Who takes part in the Memorial Cup? How did these teams earn the right to come to Saint John, and from whom? How many potential NHL customers will have the opportunity to shine at TD Station starting tomorrow night and over the next nine days? Below you will find the answers to these questions.

How did they get there? By doing everything. To a roster that already had three NHL picks in the first round at the start of the campaign – Dylan Guenther, Jake Neighbors, and Sebastian Cossa – Oil Kings architect Kirt Hill solidified the foundations of his defense by adding another round one selection. , the prospect of Canadian Kaiden Guhle, as well as Luke Prokop, elected 3And round of the Nashville Predators. Florida Panthers striker Justin Sourdif was also acquired via an exchange. All of these great people helped the Alberta club finish the regular season with a good 104 point harvest for second place overall, seven points behind Winnipeg ICE. In the playoffs, the Oil Kings wiped out their opponents in the first two rounds, before having the last laugh at ICE in five games and winning the third WHL championship in their history at the end of a six-game fight against the Seattle Thunderbirds. .

Players to watch: Kaiden Guhle capped his second career WHL championship with a playoff MVP honor, completing the playoffs with 8 goals to his name, a record among defenders. Guhle and his blue line mate Luke Prokop have also been uncompromising in their territory, recording plus-17 and plus-23 differentials respectively. In attack, Dylan Guenther kept the official scorers busy with 13 goals and 8 assists, climbing to the top of his team’s scorer rankings.

Behind the bench: WHL 2019-20 Head Coach of the Year, Brad Lauer is in his fourth season in office. In 2019, the man who played 323 NHL games, most of them with the New York Islanders, led the Oil Kings to the WHL semifinals.

How did they get there? Undisputed … until the OHL final. Undefeated in 22 games when they began their battle with the Windsor Spitfires for supremacy in the Ontario league, the Hamilton Bulldogs were only able to claim the J. Ross Robertson Cup after a seventh and final game. Identified on Day 1 of the season as the favorites to represent the league at Saint John, the Bulldogs saw their status strengthened during the trading period when general manager Steve Staios – yes, the former NHL player – acquired the forwards. Mason McTavish, the best junior player in the country according to him – and Giordano Biondi, as well as Canadiens defender and prospect Arber Xhekaj. Regular season champions, the Bulldogs have been nearly invincible at home (27-4-1-2) and conceded the lowest total of goals (176). In attack, despite the presence of only two of their players in the top-25 of the top scorers (Logan Morrison and Avery Hayes), the Bulldogs have scored 300 goals, just five fewer than the leaders, the Spitfires. Seven Hamilton players finished the year with an average of at least one point per game: Morrison, Hayes, McTavish, George Diaco, Jan Mysak (Canadian hopeful), Nathan Staios (yes, the GM’s son) and Ryan Winterton.

Players to watch: He is strong from a streak of 23 games with at least one point Logan Morrison has settled in Saint John. The striker that NHL clubs have admired in the last two draft has started or finished at least one Bulldogs goal in each of the 19 games played by the Bulldogs this spring, for a total of 17 goals and 39 points, in addition to the title of playoff MVP. . When Morrison celebrates a milestone, Avery Hayes is usually never far away. The two frontline members of the Bulldogs finished 1st and 2nd respectivelyAnd team scorers, both in the regular season and in the playoffs.

Behind the bench: Jay McKee, a Buffalo Sabers first-round pick who has played 802 NHL games, is in his first season behind the Bulldogs bench. He moved there last July after four seasons with the Kitchener Rangers.

How did they get there? With talent, resilience and composure. CEO Martin Mondou has taken the conservative approach to the latest trade deadline and you are challenged to find someone in Shawinigan who blames him today. Defender Loris Rafanomezantsoa and in particular Pierrick Dubé, the acquisition of the year in the QMJHL, joined a nucleus of purebred players, before the closing of the winter transfer window. After a regular season marked by injuries that have relegated them to 7And By finishing in the overall standings, the Cats began their playoff run with two straight wins against the Rouyn-Noranda Huskies and Gatineau Olympiques, before losing their top two seeds, the Quebec Remparts and the Charlottetown Islanders. Over the course of this first President’s Cup conquest in 53 years of history, the Mauricie franchise has signed seven wins in as many games that required extra time.

Players to watch: The two-headed monster. Mavrik Bourque and Xavier Bourgault completed their playoff series in second and fourth place in the playoff scoreboard with 25 and 22 points respectively. In the final Bourque – player voted for excellence in the playoffs – and Bourgault responded with 5 goals and 4 assists each in five games. Also keep an eye out for Pierrick Dubé, a man for special occasions. During the decisive match against the Remparts in the semi-finals, the 21-year-old forward who started the season in the ECHL with the Trois-Rivières Lions scored three goals. Then, against the islanders, Dubé started the celebrations a Shawi scoring the last goal of the 2021-2022 season for the Courteau circuit in extra time.

Behind the bench: In his eighth season behind the bench of a QMJHL team, Daniel Renaud took part in a fourth final this year. Defeated in 2012 and 2015 with Rimouski Oceanic and Quebec Remparts as assistant manager, the 40-year-old man saw the trophy slip away from him as coach behind Val-d’Or Foreurs last year.

How did they get there? Through the back door. And they will have had to wait 38 days to finally cross the threshold. Getting stuck in the Rimouski Oceanic in the first round of the playoffs was not in the host team’s plans for the annual classic. Even less at the end of the transaction period, marked by six exchanges and the arrival of 9 new players, including defender Vincent Sévigny, goalkeepers Nikolas Hurtubise and Tomas Couture, as well as forwards Philippe Daoust, Marshall Lessard and Raivis Kristians Ansons. “We didn’t want to have any regrets,” CEO Trevor Georgie explained to colleague Nicolas Landry in January. By adding a few layers of depth to his roster, in all positions, the DG thought to give his club the “best chance to win” after a modest first half of the season. When the activities resumed, the Sea Dogs were at 9And rank in the overall standings, but they began to chain together successes. The last 38 games of the campaign first saw a streak of 10 straight wins, then another 15 that coincided with the end of the regular season. It looked promising for the Sea Dogs, 3And seeded in the spring tournament. Until Océanic and its cunning strategist Serge Beausoleil stretched their legs. Faced with an opportunistic attack and tight defense, the Sea Dogs escaped the fifth and final game of the series in overtime. Ten days later, coach Gordie Dwyer was fired.

Players to watch: William Dufour has just experienced the season of his life. Throughout the campaign, he fought for the top spot in the league’s top scorer and scorer rankings, eventually establishing himself as the quintessential sniper with 56 targets hit. With 116 points, the New York Islanders prospect narrowly conceded the top scorer title to Joshua Roy of Sherbrooke Phoenix, crowned with his 119 points. Forward Josh Lawrence is one of five other league players to hit 100 points this season.

Behind the bench: Gardiner MacDougall made tournaments one of his specialties as the head coach of the University of New Brunswick Varsity Reds, which resulted in seven Canadian National University Championship titles in 22 seasons. His motivational qualities, praised by many players who have shone under his leadership, also prompted the Sea Dogs to make the 62-year-old their “hire” coach for the duration of the Memorial Cup.