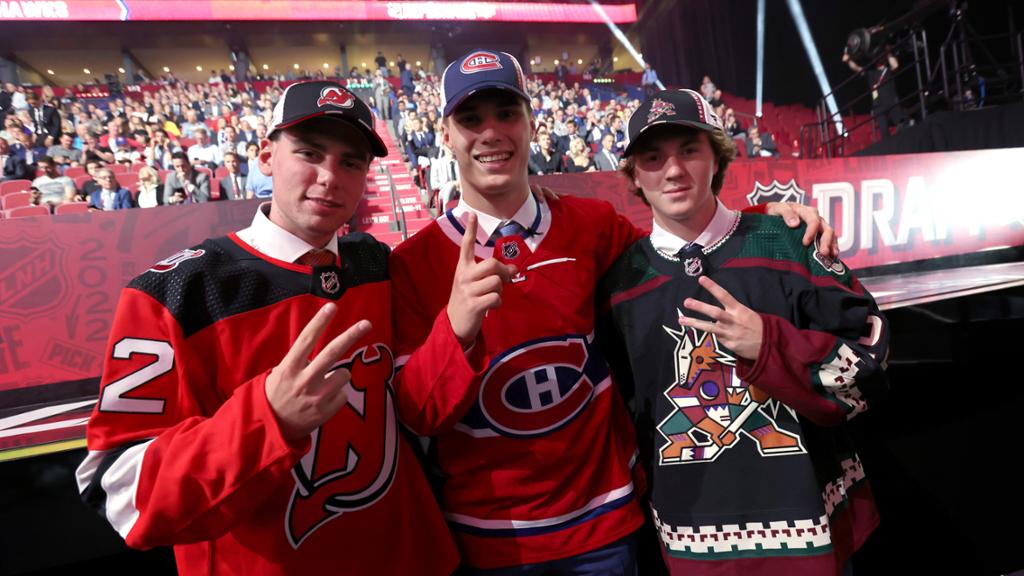 18:00: The stands fill up quietly and the leaders chat around their respective tables.

The Ottawa senators have already struck a blow a few hours before the session begins acquiring the attacker Alex DeBrincat Chicago Blackhawks for seventh overall pick in the 2022 draft, a second round pick in the same auction (39th overall) and a third round pick in 2024.

Outside the Bell Center, fans join in the festivities as they prepare to enter the arena. Some Montreal Canadiens fans already have strong opinions on which player their team should choose.

18:30 “Alex DeBrincat was our number one target, without a doubt. “

18:45 Group leaders are invited to come to their respective tables, as participation is about to begin. There are only 15 minutes left for the first round!

18:46 Boos were heard for the Boston Bruins when they attended … and cheers for the Montreal Canadiens! The Tampa Bay Lightning and the Toronto Maple Leafs received the coldest reception from Montreal fans.

7:00 pm: Minnesota Wild announces deal with goalkeeper Marc-André Fleury a new two-year contract. The Quebec goalkeeper then returns with the team that had made his purchase at the trading deadline.

Bettman gets the traditional boos from the fans … but draws some applause by starting his speech in French.

Martin Lafleur addresses the fans and recounts the moment his father was drafted by the Canadiens in 1971. He wishes the hopes to enjoy this important day.

Tanya Bossy follows him into the microphone and reminds fans of her father’s big 53-goal season in his rookie year. The crowd starts chanting “Bossy, Bossy”.

“If my dad were here tonight, he’d tell you all to dream big,” she said in conclusion.

Habs manager Martin St-Louis takes the stage in the next few moments and points out that the night is sold out.

“It took me 47 years to finally make my first draft,” said St-Louis, who was ignored by all NHL teams at the time.

19:23: The command staff of the Canadiens take the podium to announce their choice, the first of the 2022 draft.

The lucky winner is the striker Juraj Slafkovsky of the TPS of the Liiga.

Slafkovsky was named the most valuable player on his team by being the youngest player of the tournament at the 2022 Beijing Olympics, where he scored seven goals in seven games for Slovakia.

A nice gesture from Shane Wright and Logan Cooley, who went to congratulate the Slovak after the selection. The fight was between the three for the first pick in the draft.

Slafkovsky shook hands with the Habs staff, his new manager, as well as the man who could be his central player for many years to come, Nick Suzuki. The crowd reacted with enthusiasm when the two forwards embraced.

NHL.com reporter Guillaume Lepage will follow Slafkovsky on draft night. Don’t hesitate to follow him on Twitter to find out more about the new Canadiens player.

19:32: Now it’s up to the New Jersey Devils to make their choice. Former goalkeeper Martin Brodeur is the first to address the crowd, in French. He is not the only one who speaks the language of Félix Leclerc, since the new Deputy General Manager Kate Madigan made the announcement of the choice of the Devils in French and English.

To the surprise of many, it is defender Simon Nemec who is chosen, he who was the third best European prospect according to the NHL Central Scouting.

Nemec’s style has been compared to that of John Klingberg of the Dallas Stars. The Slovakian defender stood out at the 2022 IIHF World Championship, where he scored six points with an average of 18:23 per game in eight games.

In second place among North American prospects, Cooley has elite skating and offensive skills, as well as a strong work ethic. He is expected to play at least one season with the University of Minnesota, but he has what it takes to become an impactful player in the NHL.

19:46 : Shockwave in the Bell Center, since Canadians have proceeded two transactions at the same time.

The Habs swap the defender Aleksandr Romanov and a round four pick (98a) to the New York Islanders in exchange for a round one pick, the 13th in the 2022 auction.

General manager Kent Hughes was not done shopping, as he used 13th picks and 66th picks in the draft to secure the services of downtown Chicago Blackhawks Kirby Dach.

Tweet from @Sportsnet: The journey of being a fan of @CanadiensMTL, a two-part story: (Part 1) pic.twitter.com/VjI5p3k3vc

19:52: The wait is finally over for Shane Wright, who becomes the property of the fourth-tier Seattle Kraken.

Wright, the Central Bureau’s number one prospect, is a very talented center. He has a powerful delay, excellent vision and his intelligence allows him to make a difference. He had 94 points, including 32 goals, in 63 games in his third season with the Kingston Frontenacs.

Tweet from @NHLGIFs: @ArizonaCoyotes have selected Logan Cooley as their third overall pick at #NHLDraft 2022! pic.twitter.com/2W2xMU7hn2

Gauthier sees himself as a two-way forward with good skills and a tough team. His shot is said to be almost as vehement as his idol’s, Austin Matthews. He is expected to move to center next season at Boston College.

20:05: The Columbus Blue Jackets opt for a sixth-ranked defender by enlisting David Jiricek, the fourth best potential customer in Europe. He was visibly excited and happy to join his new team, even going so far as to kiss the logo on the shirt.

Jiricek is an impressive attacking defender with great vision and sense of play, sustained a knee injury in the Czech Republic’s debut match at the World Junior Championships in December, which forced him to miss three months of activity before returning to play. in April.

Tweet from @BlueJacketsNHL: For our blue. For our coat of arms. @mhl | #CBJ pic.twitter.com/2J50X1fRMy

20:12 : The Blackhawks go there with their first of two selections in the first round. Their choice is Korchinski of the Seattle Thunderbirds.

Korchinski led the WHL rookie defenders with 65 points (four goals, 61 assists) in 67 games. His skills as a director place him among the best defenders in this vintage of the repechage.

20:17 : For prospects, the evening doesn’t stop once they’re drafted. Slafkovsky discovers the realities of the NHL by recording a podcast moments after his selection, but also by discovering the gastronomy of the Bell Center.

Kasper captained Austria at WJC 2022 last December. The central player stands out for his energy, intensity and speed. He has 11 points in 46 regular season games with Rogle in the SHL this season.

The central player is considered one of the most dynamic skaters of his year. He finished seventh in the WHL with 90 points (35 goals, 55 assists) in 65 games.

His brother Carter was drafted 100th overall by the Edmonton Oilers in 2020.

And, let’s face it, style is not lacking!

20:30 Anaheim Ducks CEO Pat Verbeek is in his first draft in the NHL and makes the decision to select the fourth defender of the 2022 class.

Mintyukov finished third among OHL defenders with 62 points (17 goals, 45 assists) in 67 games. He is an excellent skater with a good offensive instinct who knows how to play physically.

20:33: We are entitled to a third transaction in this draft. The San Jose Sharks, who should have drafted 11th place overall, trade that pick with the Arizona Coyotes for picks 27, 34 and 45. This is the first trade for Mike Grier, who was named general manager of the Sharks on Tuesday. .

20:40 : With the choice obtained, the Coyotes still equalize in attack by selecting Connor Geekie, midfielder of the Winnipeg Ice of the WHL.

The Sportsnet network had installed a microphone on Geekie to hear his reaction, but the latter came very close to tripping over the stairs of the bleachers on his way to the stage!

Tweet from @Sportsnet: Well that’s one way to get into @NHL 😂 #NHLDraft | #Yotes pic.twitter.com/LbySN9uAuz

Geekie is a great midfielder difficult to contain due to his competitive spirit and his confidence in all situations. He is the brother of Seattle Kraken striker Morgan Geekie.

20:44 : With their second pick in the draft, the Blue Jackets choose Denton Mateychuk, an attacking defender who finished 14th in North America.

Mateychuk can use his excellent skating to establish himself as an offensive impact player, but it also allows him to defend himself intelligently. He finished third among the WHL Moose Jaw Warriors with 64 points from 65 games.

20:52 : With the choice obtained in the exchange with the Canadiens, the Blackhawks choose Frank Nazar, striker of 5’10 ”, in 13th place.

Nazar is an explosive skater who has 70 points (28 goals, 42 assists) in 56 games with NTDP and nine points (three goals, six assists) in six games at the U18 World Cup.

20:58: Rutger McGroarty becomes the fourth NTDP player to be drafted in the first round, but will have to move to Canada as the Winnipeg Jets have selected him 14th overall.

McGroarty led the NTDP with 35 goals in 54 games this season. His coach compared him to the New York Islanders forward Anders Lee. He will join the University of Michigan next season.