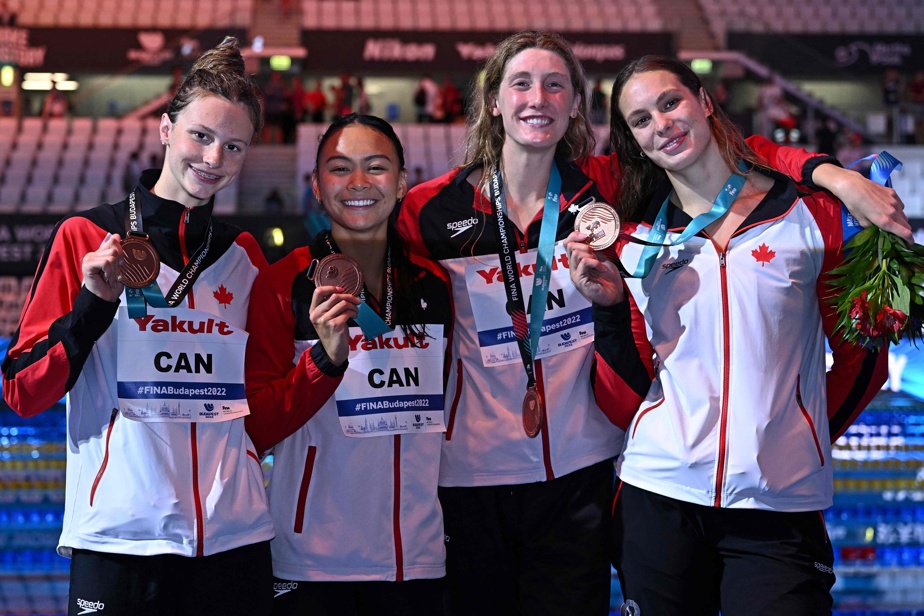 All the greatest musical groups in history have achieved ecstasy thanks to the uniqueness of each of their members. The Canadian women’s swim team is a bit like that. He returns from the World Championships in Budapest with a historic harvest, while experiencing the best moments of his history.

“We are having the best years of Canadian swimming,” said Benoit Huot, former swimmer, Paralympic multi-medal winner and Radio-Canada analyst.

Canada collected 11 medals, 3 of which gold, good for fourth place in the medal table. A week that Huot defines as “beyond expectations”.

After winning six medals at the Tokyo Olympics ten months ago, Canadian swimmers continue their momentum, especially in the women’s side. Precisely because this team has brought together all the elements to win.

It’s like a band. Very good bands are always at the top for 10 or 15 years and it fades away, because the members leave. In swimming, it is the athletes who retire. It all started in 2015-2016 for this nucleus and they have followed one another.

This core is masterfully led by Penny Oleksiak and Kylie Masse. Swimmers aged 22 and 26 shone again at the World Championships. Oleksiak won four relay medals, while Masse became world champion for the third time in her career, as well as collecting two more medals.

Maggie Mac Neil, Taylor Ruck, Rebecca Smith, Kayla Sanchez, and Summer McIntosh, among others, have been grafted in recent years. “Summer will swim after Paris, but it’s possible that some will retire after 2024. So it’s super motivating and I think the girls would like to keep that momentum and most of them train together daily in Toronto.”

Additionally, Huot believes that the success of Canadian swimmers is due to the coaching provided to athletes at Toronto’s High Performance Center.

The Paralympic was a bit worried before the World Cup kicked off, however, as the team would not be led by prolific team coach Ben Titley whose contract was not renewed by Swimming Canada in March. It is thanks to him that the Oleksiak, the Masses and the McIntosh have managed to reach the highest peaks. “Ben Titley is a magician. The kind of guy who gives a workout schedule a spark, “Huot said. However, his replacement, Ryan Mallette, has done a great job since taking the job. Huot fears Titley’s absence will mean that he is a good guy. will make it feel medium term for experienced swimmers.

Kylie Masse has four Olympic medals and eight world championships. She has won everything but Olympic gold. Ontario may not be the most talkative or famous, but she remains the most consistent swimmer in the country, if not the planet. The back specialist deserves more recognition, Huot thinks.

It is the silent strength of this swim team. She is always there. There are few athletes in any country who have consistency like Kylie Masse.

Masse is the fulcrum of this team, for his experience, but also for his way of approaching sport: “He is one of the most hard-working. I believe that even though she is quiet, Kylie is the core of this team. It is she who unites everyone and inspires other girls. She is a role model and an example for this team. ”

Summer McIntosh had many eyes widened when she participated in the Tokyo Games at the age of 14. She recently impressed everyone by becoming world champion and quadruple medalist at just 15 years old.

“It has taken off in the last 10 months. She was petite and petite in Tokyo. She is still very young and very small but she is much stronger in the upper body. She looks like she has grown up, she has gained confidence over the past year and that is what sets her apart, ”says Huot.

McIntosh is a diamond in the rough. The kind of talent that only passes once in a generation. He has dropped several world grades and even though he hasn’t finished high school yet, he competes with the best swimmers on the planet. “We want him to be there for the next 10 years. ”

Thanks to her and the other team members who are in their 20s, the future of Canadian swimming is now.