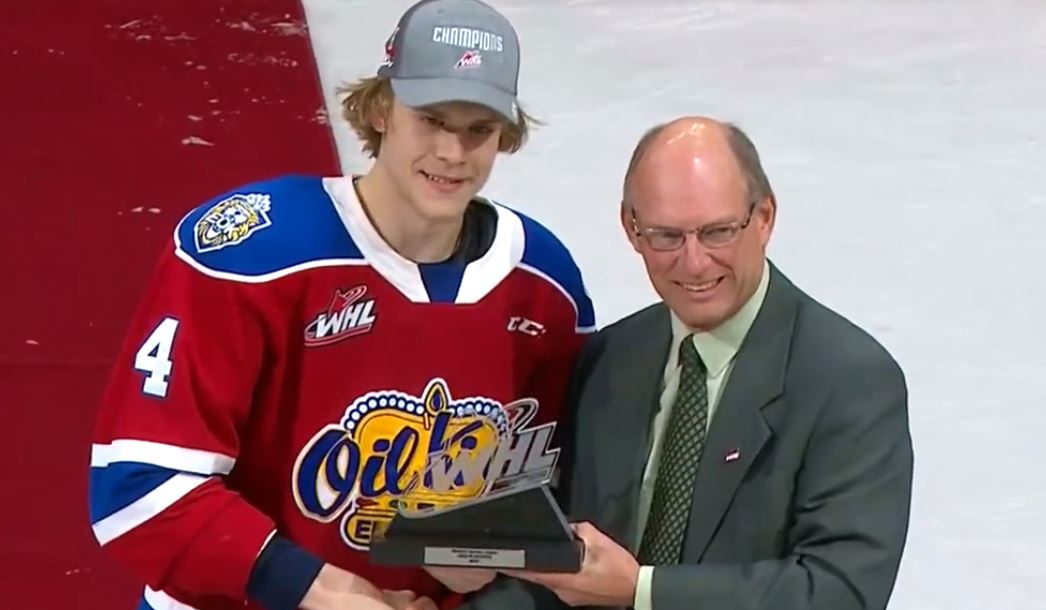 A huge boy’s hockey game was scheduled last night in Edmonton. It is not because the Oilers are eliminated that the city of Edmonton no longer vibrates to the beat of hockey.

The Oil Kings, who led the 3-2 WHL Finals, had the opportunity to take out the Seattle Thunderbirds, win the WHL (Ed Chynoweth Cup) title and buy a ticket to the Cup Memorial. All this at the same time in front of more than 7,000 people in Rogers Place, the arena where Connor McDavid and Leon Draisaitl are used to rain or shine.

And they took the opportunity!

Kaiden Guhle and the Oil Kings had a good first period (21-4 shots on goal), scoring the first goal of the game: that of Jakub Demek.

At the beginning of according to, Guhle scored his eighth of the playoffs to give the team a two-goal lead. What a sharp blow!

Nice goal from Kaiden Guhle. His club, the Edmonton Oil Kings, if they beat Seattle, will go to the Memorial Cup. Edmonton leads 2-0 just minutes from the end of the 2nd period.#NHL #Stanley Cup #CH #GoHabsGo #King of oil #WHLpic.twitter.com/SxXBYrKaod

Despite the score of 23-15 in the last two games, the Thunderbirds have not managed to get back into the game. Final score: 2 to 0 in favor of the Oil Kings.

Hopefully the other Thunderbirds – the Rocket opponents in the American League – will be sent on vacation tomorrow night too, hehe.

Guhle finished the match with one goal, five shots and a differential of more-1. And quite a few minutes spent on the ice …

The Oil Kings will therefore participate in the Memorial Cup from 20 to 29 June in St. John with the Cataractes (QMJHL), the Sea Dogs (host team) and the winner of the last match between the Hamilton Bulldogs and the Windsor Spitfires played tomorrow evening in Hamilton .

Jan Mysak (no points), Arber Xhekaj (an assist) and the Bulldogs weren’t actually able to emulate the Oil Kings and win Game 6 last night. They escaped 5-2 to Windsor. So there will be match # 7.

We will therefore know tomorrow evening if there will be two (Guhle and Sobolev) or three (Guhle, Mysak and Xhekaj) representatives of the Canadiens at the Memorial Cup. Remember that all matches in the tournament will be broadcast on RDS.

The Canadian’s first round pick in 2020 inherited the title of his team’s most valuable player (MVP) in the playoffs (WHL). He is therefore the recipient of the equivalent of the Conn-Smythe Trophy in junior hockey of western Canada. Oh!

Recall that Guhle was sold to the Oil Kings mid-season. He will have collected 25 points in 25 regular games, then another 16 (including 8 goals) in 19 playoff games. 16 points is the third highest total for a defender in the WHL playoffs.

In playoffswill have scored great goals, obtained important assists, hit the opponent, collected his, inflicted penalties, cut plays, resumed the attack, cleared the net on his own and showed the way for the rest of the team.

Will Guhle will raise another trophy (collective eo individual) at the Memorial Cup? At the junior world championships in August?

Can’t wait to see him in Montreal next fall …

– Igor Miroshnichenko in the QMJHL? [TSLH]

– What will happen to Tristan Luneau and Noah Warren in the future? [LaPresse]

– Defeat of Canada (football) on wet ground and in terrible conditions. [RDS]

– Did the Sagueneen reverse their decision?