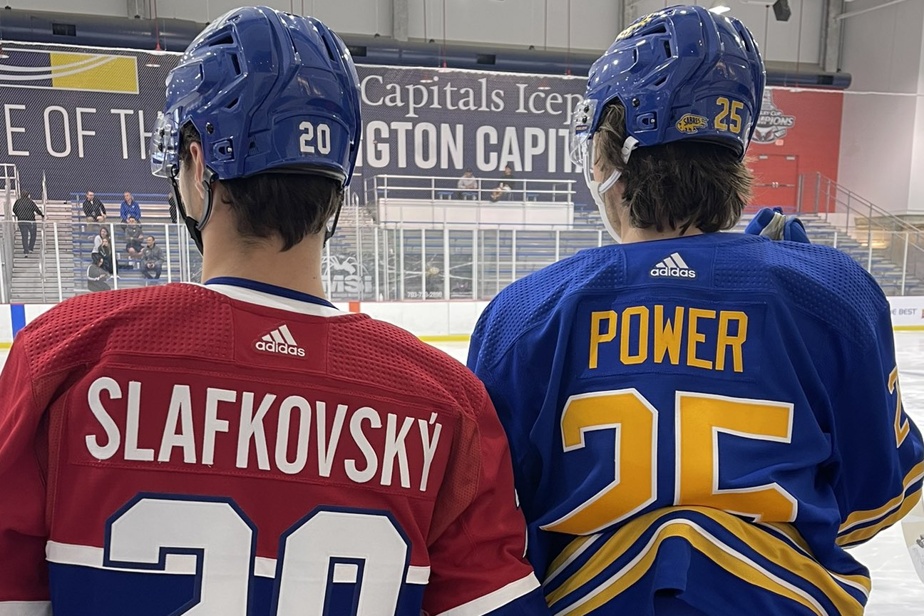 (Arlington, Virginia) The place wasn’t easy to find. But once we got there, there were young stars per square foot.

After taking a hiatus in 2021 due to the COVID-19 pandemic, the NHL Players Association and hockey card maker Upper Deck are back at the Rookie Showcase, an event that brings together some 30 young players. They were invited to take their first official photo for the cards that the fans would later steal.

To do this, the organizers had chosen the MedStar Iceplex, a training center consisting of three skating rinks and logically located on the eighth floor of a shopping center.

On the spot, despite the banality of the place, he shone with youth and talent. Owen Power, Matty Beniers, Shane Wright, Dylan Holloway, Jack Quinn, Marco Rossi, Jake Sanderson… Lots of players who, no doubt, will be NHL stars, probably this season.

What attracted the most attention, however, was Juraj Slafkovsky, of the Montreal Canadiens. There was obviously a bias recently: he and Wright were the only two players in the group to be drafted in 2022. But he went much deeper. It is an understatement to say that at 6’3 ”and 218 pounds, the Slovak does not go unnoticed, even without his skates.

“Jesus, it’s huge! Said Brendan Brisson, of the Vegas Golden Knights. The American faced Slafkovsky at the Beijing Olympics, but he had never seen him off the ice until Tuesday.

“I remember seeing him at the Games and telling myself: he’s a real player,” said Brisson, who was “not surprised at all” to see the Canadian make his first pick. Like many people, he shuddered watching the video of the behemoth killing a stationary bike in the Habs development camp.

Seattle Kraken’s Matty Beniers was also part of the American Olympic team. It was his networking ability that impressed him the most. “Some guys have it, some don’t; I would love to have him like him, “Beniers said.

“Part of the game”

According to Slafkovsky himself, it’s not just his new colleagues that he’s popular with.

Both in Montreal and in his native country, he is now recognized on the street. It must be said that he has become something of a national hero in Slovakia, where he was the first representative to be selected first in the NHL Draft.

However, he does not complain about this new celebrity, quite the contrary. Taking pictures with fans and signing autographs, “it’s fun and part of the game,” she says.

Like all on-site players at the Rookie Showcase, he also took part in a lengthy ice photo shoot for the Upper Deck.

“Will it be strange to see your face on hockey cards?” asked a reporter. “It will depend on my appearance!” “, She replied, shot for the eye.

Obviously, Slafkovsky wanted to have fun. Another reporter pointed out that he was already preparing to face his compatriot Simon Nemec of the New Jersey Devils at rookie camp next week. The winger replied that with Filip Mesar, a childhood friend also enlisted by the CH, he intended to “destroy” the defender. Let’s say here that he is also a friend.

Even when The print Asked about the media pressure that awaited him in Montreal, Slafkovsky indicated that it “wasn’t a problem” for him. “I can’t wait,” he also added him.

Will he answer the same thing in a year? we restarted it.

“We’ll see,” he concluded with a smile.