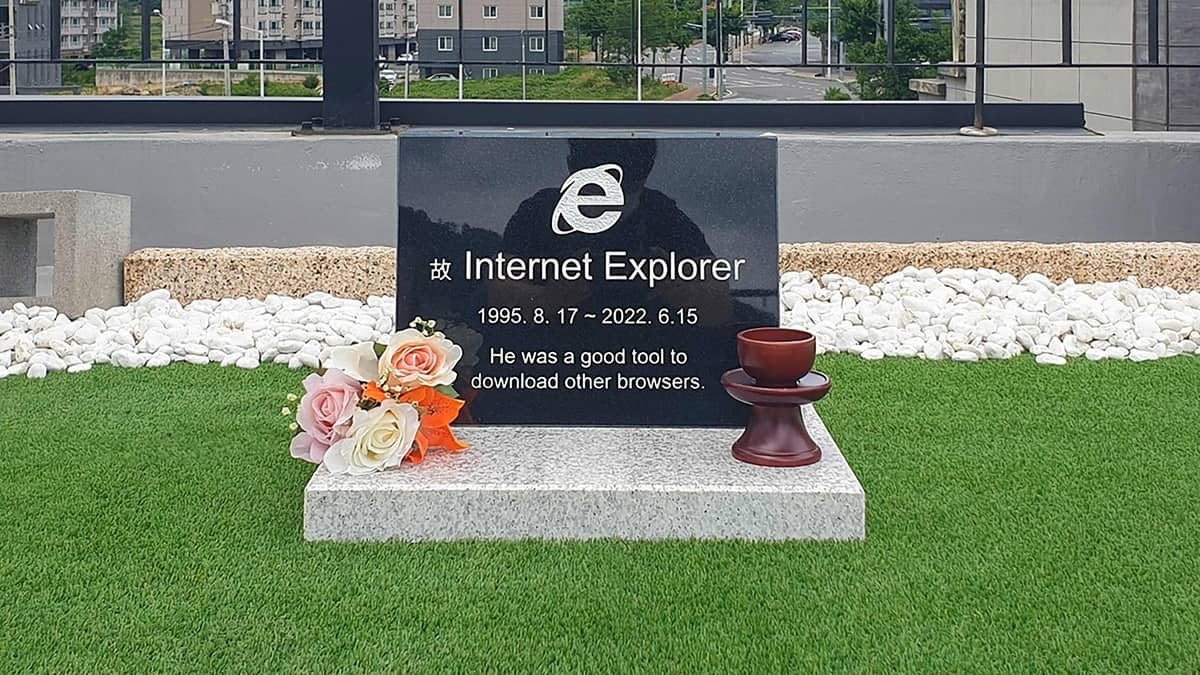 
Internet Explorer may have made his daily life painful, but a South Korean computer engineer still decided to build a tombstone, whose photos have already gone viral, in memory of the emblematic web browser of the American giant Microsoft.

Unlike many other countries, South Korea, which has one of the fastest Internet networks in the world on average, has remained strangely tied to Internet Explorer, which Microsoft officially said goodbye to Wednesday after 27 years of service.

In honor of the navigator’s “death”, engineer Kiyoung Jung, 38, installed a plaque on the roof of a cafe in the South Korean city of Gyeongju.

On the dark-colored stele appears the famous letter “e”, which has long dominated the screens of hundreds of millions of computers, accompanied by an epitaph: “It was a good tool for downloading other browsers”.

On the Internet, images of this monument quickly spread virally, with users of the social media site Reddit, for example, having approved them tens of thousands of times.

After its launch in August 1995, Explorer had quickly supplanted the first large browser in Internet history, Netscape, to the point that it weighed over 90% of the industry by the early 2000s. But the browser ended up exasperating too. many users, who blamed it for its slowness and recurring problems.

Except that in South Korea it was made mandatory for the use of banking services and online shopping until about 2014, because all of these online activities required sites to use ActiveX, an extension created by Microsoft.

• Read also: We made Quebec celebrities do weird things with artificial intelligence

And until recently, according to local press, it remained the default browser for many Korean government sites.

As a software engineer and web developer, Kiyoung Jung has consistently “suffered” at work due to compatibility issues with Internet Explorer, he told AFP.

“In South Korea, he explains, when you work on web development you always expect it to work well with Internet Explorer, rather than Chrome,” the browser of the American giant Google which now monopolizes three quarters of the global browser market, according to the specialized site. Kinsta.

However, sites that work correctly on other browsers, such as Safari or Chrome, could instead have many problems on Explorer, continues Mr. Jung, who was then forced to many hours of additional work to ensure the compatibility of the sites in question.

Microsoft had announced the end of Explorer in 2021, which will have known eleven successive versions, and then gave the date of June 15, 2022 in the middle of last year.

In practice it will still be possible to use Explorer, but Microsoft will no longer make updates or changes to the browser, launched in August 1995.

On the one hand, Mr. Jung says he is “happy” with the announced end of the Microsoft browser. But on the other hand, he also claims to feel nostalgia and emotion at the idea of ​​Explorer’s disappearance, of which he experienced the apogee.

Hence his idea of ​​building a tombstone for the deceased navigator.

“People are often relieved that machines don’t have souls, but we as humans actually give them our hearts,” the engineer told AFP, quoting Japanese animator Hayao Miyazaki.

Mr. Jung says he is happy today for the enthusiasm aroused by his fake tombstone and specifies that he and his brother – the owner of the café – intend to leave it on the roof of the building indefinitely.

“It was very exciting to make others laugh,” he explains.