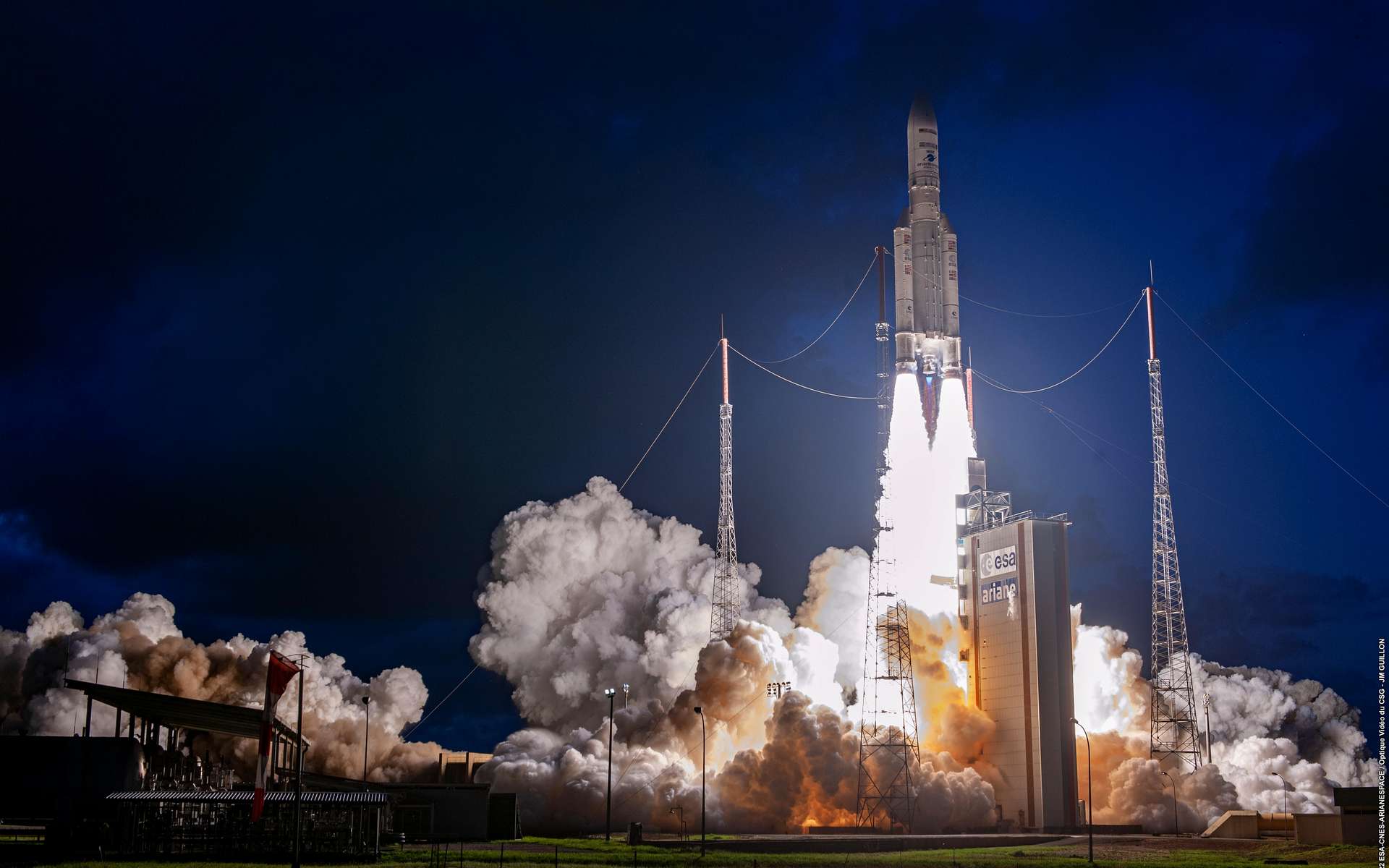 Another time Arianna 5 achieved success with the delivery of two telecommunication satellites on a transfer orbit geostationary: Measat-3d (produced by Airbus Space for the Malaysian company Measat) and Gsat-24 (built by the Indian space agency). The rocket took off at 18:03 local time (23:03 Paris time). Apart from a slight delay, everything went according to plan for a flight that lasted exactly 39 minutes and 57 seconds. It’s a routine flight for Ariane 5, except it’s one of the last.

Preparation for the launch began on May 13 at Guyana Space Center (CSG). Operations began at Construction of the launcher integration (BIL) where the teams joined the main floor cryogenics (EPC) on the second floor. They also added the two to the central body booster side, named EAP for the acceleration phase of the powder.

Each of these large pieces has been assembled at different sites in Europe. Furthermore, the different elements of the European rocket come from all over the Old Continent. The assembly of the EPC is carried out at the headquarters in Mureaux, near Paris. The second phase is assembled in Bremen, Germany, while the EAPs come from Italy. The fuel is manufactured at CSG. Once assembled, Ariane 5 is transferred on May 18 from BIL to Final assembly construction (BAF).

The satellites arrived a little late. Following the war in Ukraine, the cargo airline Antonov is in trouble. It usually carries the geostationary satellites (very large) at CSG. Due to the lack of available aircraft, the first passenger, Measat-3d, arrived by boat from France. The second, Gsat-24, produced by the Indian space agency, arrived in a military cargo plane.

Upon arrival at CSG, the satellites were transported to one of the Payload Preparation Sets, where it is ensured that the journey did not affect them. Several tests are carried out, as well as inspections by quality technicians, which verify that all procedures have been respected. Finally, the ergoliers fill the fuel tanks of the satellites with their own fuel. The operation takes place in early June for Measat-3d and Gsat-24.

The integration of the passenger satellites starts on June 8th. Aryan space uses the ingenious Sylda system – Ariane double launch system – to embark two satellites at the same time. This device, unique in the world, allows you to halve the heavy cost of an Ariane 5 flight, capable of carrying 10 tons of payload in geostationary orbit.

The Sylda allows you to steer the smaller satellite without touching it to land the other. The Ariane 5’s fairing is so large that it can cover and protect everyone from frictionair during take off. On June 8, Measat-3d (5,648 kilos) was integrated on top of the Sylda. The next day they are put under the headdress. On June 13, Gsat-24 is integrated over the second stage of Ariane 5. Finally, on June 14, the fairing containing Sylda and Measat-3d is placed on top of the launcher, the Sylda shell encapsulates Gsat-24. On June 16 there is the dress rehearsal and the following day the last inspections allow to carry out the review of the readiness to launch, essential to give the stoplight green at take off.

June 21 was sunny and warm from the early morning hours. Let’s open the giant gate of the BAF and the whole Ariane 5 sees the light for the first time. For a few hours, the rocket placed on his table mobile is rolled to its launch pad. It’s a lengthy operation that requires rails and a simple standard truck to haul the entire assembly, which weighs 1,400 tons!

The long wait before taking off

June 22. Security is maximized on the site. The gendarmes carry out the checks while the Foreign Legion ensures that no intrusion disturbs the launch sequence. It must be said that with 500 tons of powder in the EAPs and almost 200 tons of propellant liquids in the central building Ariane 5 can become a real bomb. In case of evacuation we park our car come back to be ready to leave in an emergency without maneuvering. We don’t skimp on safety!

It’s D-Day. The weather remains cloudy and the temperature is more pleasant. It is feared that the show will be short duration if Ariane 5 disappears behind cloud low a few seconds after take off. At the control center Jupiter, the timer advances to the start time. Behind the numerous screens, Arianespace employees follow all flight parameters: launcher, launch assembly, safety, backupcommunication, weather report, etc. Customers’ satellite engineers are there, behind their screens, monitoring the health of their precious satellite. On the other side of the bay window, Arianespace welcomes its guests and various representatives of clients, agencies and authorities in the stands.

For hours and until the last few minutes before takeoff, the EPC and upper stage tanks are filled with oxygen ehydrogen liquids. Gradually, as we approach the final count, the voltage builds when a “red” appears on the screen. This is a problem with the launch set. Quickly, the operations director decides to suspend the timer to see what’s going on. Two short hours remain before deferring to the next day. Time is suspended for several tens of minutes, the inhabit On Youtube stay silent. The sun begins to set, but it awaits us.

The roar of the last moments

More than forty minutes have passed when the count resumes. The take-off is therefore scheduled for 18:50 local time – 23:50 metro time. Ariane 5 is therefore in full connection with the elements to give us a great show. The sky has cleared. The final count begins. All eyes are on the launch pad. Ariane 5 takes off. A sun lights up on the launch pad. Like a flying torch, the rocket splits the sky in two, quickly crosses a small cloud and escapes into the hole in the blue sky in a festival of light and shadow. A few seconds after take-off, the sound reaches us and its power resonates throughout our body.

Two minutes and twenty seconds after takeoff, the EAPs, which have so far provided most of the thrust, are empty. They are expelled from the central body which continues its journey, pushed by the Vulcain engine. Quite rare phenomenon in Guyana, we can see the expulsion from the ground. Two points of light can be seen falling on either side of the large point of light. They will end up at the bottom of the Atlantic Ocean. A minute later, Ariane 5 is now in space. His headgear is useless now that there is no more friction. Both pieces are ejected. Once again, we get to see these new points from the ground. From the memory of regulars, this is the first time we’ve gotten to see Ariane 5 for so long by Kouro.

As the sun has set at CSG, the flight continues. At H + 8 min 47 s, the EPC separated from the second stage. He too will end up at the bottom of the ocean. The second floor takes over. 28 minutes and 40 seconds into the flight, the first passenger satellite – Measat-3d – was ejected. Shortly thereafter, Sylda was also ejected, releasing Gsat-24. The latter will finally be separated from the upper floor at H + 39 min 57 s. Soon after, the operators to catch the first signals from their satellite. Mission accomplished, VA257 is a success for Ariane 5, one more for CSG before starting to sail in troubled waters.

There are only four Ariane 5 flights left before retirement. Two are planned this year, two more in 2023, the last of which in April for the Juice probe. Part of the equipment is no longer used. Today only one startup table is used, the second one remains stored externally. ” It could serve as a reserve in case of obsolescence oranomalythen it will be dismantled says Daniel de Chambure, head of ESA’s office in Kourou. Some of the buildings dedicated to Ariane 5 will no longer be used. The dismantling of the BIL is likely. ” You should know that some of these buildings are very tall, all in height, and they are big consumers in terms of power and air conditioning “Remembers Daniele. The BAF is still 90 meters high!

All operations on Ariane 5 still require personnel today. Most of them will be affected Ariadne 6 or it already is. Because even though Ariane 6 has not yet flown, she has been living with Ariane 5 at CSG for several years. In this regard Daniel de Chambure smiles: ” I, who am still in charge of Ariane 5, have a problem. I absolutely have to keep the teams of engineers, operators and technicians on Ariane 5. The site, in fact, seems to lack staff to peacefully guarantee the passage. An entire generation starts with Ariane 5 ”. There will be Ariane 5 alumni as there were Ariane 4 alumni says Daniel de Chambure. CSG staff have seen other pitchers come and go first. Bruno Gérard, Director of Arianespace and ArianeGroup in Kourou reminds us: ” It’s always the same job. “

Note: More than 600 European companies are involved in the construction of Ariane 5, including over 350 small and medium-sized businesses.