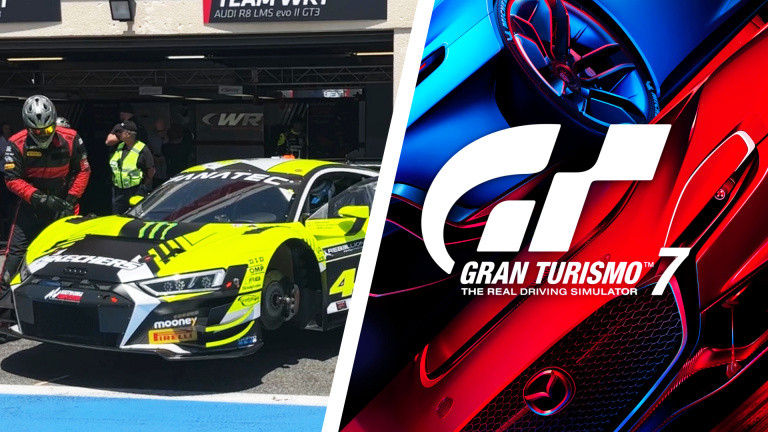 At a time when racing games pride themselves on being real simulators, we interviewed real racers, fans of virtual circuits. Training, learning, driving pleasure, they willingly pass behind a screen to practice their profession but are not necessarily attracted to the same titles as the general public, and they do not necessarily have sweet words for Gran Turismo 7, F1 or Forza Motorsport.

The real driving simulator! Since the PS1 era, the Gran Turismo series has prided itself on being the true racing simulator. Evolving with the performance of PlayStation consoles, both the physics engine and controls have greatly improved over the years, integrating many real-world parameters and offering more advanced driving compatibility than ever. And all while maintaining a system of driving aids not to lose its main target: the general public.

So titles like Gran Turismo 7, Forza Motorsport 7 or even F1 22, must today make the big difference between an audience of beginners who play with the controller, sometimes young players who discover practice, and more experienced amateurs equipped with pedal and steering wheel. . And of this need to attract a wider range of playersto make them play together in a multiplayer game, some compromise necessarily arises both on the competition rules and on the very need of the practice, that is the control of one’s own vehicle.

However, at the same time, more advanced simulations, more rigorous in terms of physical models, have been able to develop and find an audience of connoisseurs. We can name Assetto Corsa, its Competizione version, but also iRacing, Raceroom, RFactor 2 or even AutoMobilista. Virtual racing fans, real Sunday drivers and even professionals, use these titles to learn real circuits, work on their curves, their braking, often behind the wheel of the car they own in reality. The approach is different, the requirement of another leveland without having reached the minimum equivalence between reality and virtual reality, these games are now considered real tools to improve driving in reality.

So, we went to the Circuit Paul Ricard du Castellet on the occasion of the passage of the Fanatec GT World Challenge Europe to questions the real professional drivers of the GT3 and GT4 category, on their use of these racing games that allow them to make a difference once on the real circuit. A good opportunity to see their journey, the bridges between simulation and reality, the titles they have used and are using today, and finally the equipment they have in hand to play or train.

Gabriela Jilkova is Drago Racing Team ZVO driver since the beginning of the year, after a year in Team Zakspeed. She is also a streamer on Twitch by the name of QuickGabi. At the age of 26, this true racing professional makes a series of circuits all over Europe, on tracks she often discovers for the first time at the start of the race weekend. So we asked her how she trains.

At the weekend we have little time for free practice, at most two or three free practice sessions before qualifying. So most of the time, before I come, I train on a simulator at home. It is very useful if we have to go to a circuit that we have never been to before. For example, here in Le Castellet, I was able to do hundreds of laps to learn the different curves. And it’s also something I do before a circuit I know, because it’s still a good workout anyway.

Obviously, we wanted to know which games, or what simulation software he was using:

It depends on the circuits, because not all of them are available everywhere. So I switch from iRacing to Raceroom or Assetto Corsa. I am always looking for the most realistic game both in terms of the circuit and in terms of vehicle behavior. Gran Turismo, I used to play it on PS1 when I was in kindergarten. But no, it’s not a simulator per se. It’s not something that helps you drive better on the track. Sometimes I play it with friends with a controller, but I don’t really see it as a setup aid.

Gabriela Jílková plays on a DirectForce VRS basis, with a Cube Controls wheel and Heusinkveld crankset. You can find it directly
on his Twitch channel
where he regularly broadcasts his races and training sessions, even if by his personal admission he is not yet as fast in the virtual world as on the real circuit. For those who are interested and not afraid of English, You can find the full interview here.

Driver of the Emil Frey Racing team on Lamborghini Huracan GT3 EVO, Arthur Rougier has mixed virtual and real racing since its inception. At this weekend’s Fanatec eSport GT Pro Series event in Le Castellet, Arthur finished 3rd in the Pro class, earning 3 bonus points for the GT3 championship. A virtual simulation specialist who shares his journey, his relationship with simulators, the simulations he uses and the equipment that accompanies him, in this video in French.

At first I was playing Formula 1, so it was more of a game than a simulator, on an entry-level simulator. I started like that when I was 12. And at the same time, I started my sports career in real life, and I quickly found that there was a way to connect the two so that it was positive both ways.

So we asked him what he used his simulator for today:

The simulator is already being used to learn new circuits. Today it is a key element for any driver. It saves a lot of time and even on a circuit I don’t know, in three or four laps I can be three-tenths of what I’ll be able to do better later on in the weekend. And this saves teams a lot of time when the driver is ready quickly and thus optimizes the weekend in the best possible way.

What simulations are used for race preparation?

According to circuits and requests. I also do simulation races, so I adapt to the championship in which I run, such as Assetto Corsa Competizione for the GT World Challenge eSport. My favorite game in terms of feeling is perhaps iRacing, with the community system for playing online, it’s really cool. I also drove RFactor 2 for the virtual 24 Hours of Le Mans. These are the 3 software I use, depending on the available tracks.

At all. I’ve always played F1, a series I like, when it was “not serious” for me, when it was fun. I also had Gran Turismo 5 on PS3. And I haven’t played it since. For me there will be more games. In terms of realism it loses a bit compared to the three platforms I mentioned.

Arthur Rougier trains on an aluminum profile simulator, with a large curved screen, a Heusinkveld pedal board, a Simucube base and a Cube Controls steering wheel. If your computer and hardware configuration was set up and adjusted quickly, with the help of the community, Arthur spends a lot of time setting up his virtual vehicle. For him this is one of the essential keys to achieving good race times.

Raffaele Marciello: The fastest in eSports as in GT3

Raffaele Marciello is the top driver of the Akkodis ASP Team, current leader of the Fanatec GT World Challenge championship with his Mercedes-AMG GT3. That day he also won the eSports competition by finishing first in the Pro category, bringing 5 points to his team, in addition to the 24 points won in the real race. This simulator specialist, started in real life at the age of 3 in karting, and passed through the F1 teams Ferrari, Sauber, respectively as tester and 3rd driver. A dimension that explains here his relationship with the simulation.

I started with Gran Turismo 1 when I was 3-4 years old. I consider myself a Nerd, I love technology, I build my own PCs and, even if I have little time because you have to practice to be fast, I like video games in general.

When asked what role simulation plays in his current job, Raffaele speaks the same way as our previous two pilots, except that he doesn’t particularly need it:

The simulation is now a pleasure because I have the ability to drive very often. But it’s a great tool for young drivers, not to feel the car, but to use the brake properly, and things like that. It’s not a real car, it doesn’t feel like speed, but it’s a good tool for understanding the behavior of a car as a whole.

And for the simulations he uses or appreciates the same references are cited, but with a slightly different opinion:

In GT3, Assetto Corsa Competizione. I don’t really like the behavior of iRacing in GT3. My pleasure is Assetto Corsa Competizione. I also have a platform with Gran Turismo 7, a Podium wheel from Fanatec. GT7 is fantastic, it’s a nice game to start with, a childhood memory for me, which I use for the pleasure of collecting cars. It shouldn’t be taken seriously, but it’s also a great game with impressive graphics.

For the configuration of your PC, Raffaele uses an aluminum cockpit with 4 screens, a PC built around the RTX 3090 and a Simucube-based configuration. It also has a PS5 setup with Fanatec’s Racing Wheel F1.
You can find his full interview on Youtube
but we warn you, it is totally in English with no subtitles.

Finally, what emerges from these interviews is that specialized platforms for simulating vehicle behavior are more useful for professional drivers or amateurs compared to more open titles like Gran Turismo 7 or Forza motorsport 7. These, and also the F1 series, are considered more as games for those drivers looking for pure realism, which they find in titles like Assetto Corsa Competizione, iRacing or Raceroom , a great tool for working on your knowledge of the circuit, your braking and also, to a lesser extent, your settings.

But each of them admitted to having had best sellers such as Gran Turismo 1 or Formula 1 in their hands because, when they were children or still today, and having taken or still enjoy running. What justify the compromises made by these games for the general public? It can be for beginners, fast racing enthusiasts, car collectors. Certainly less for the simracers equipped with steering wheel, cockpit and who, with the arrival of Assetto Corsa Competizione on the latest generation consoles, and the many evolutions of iRacing or Raceroom, touch the new frontiers offered by the most advanced car simulators, now playable by everyone.