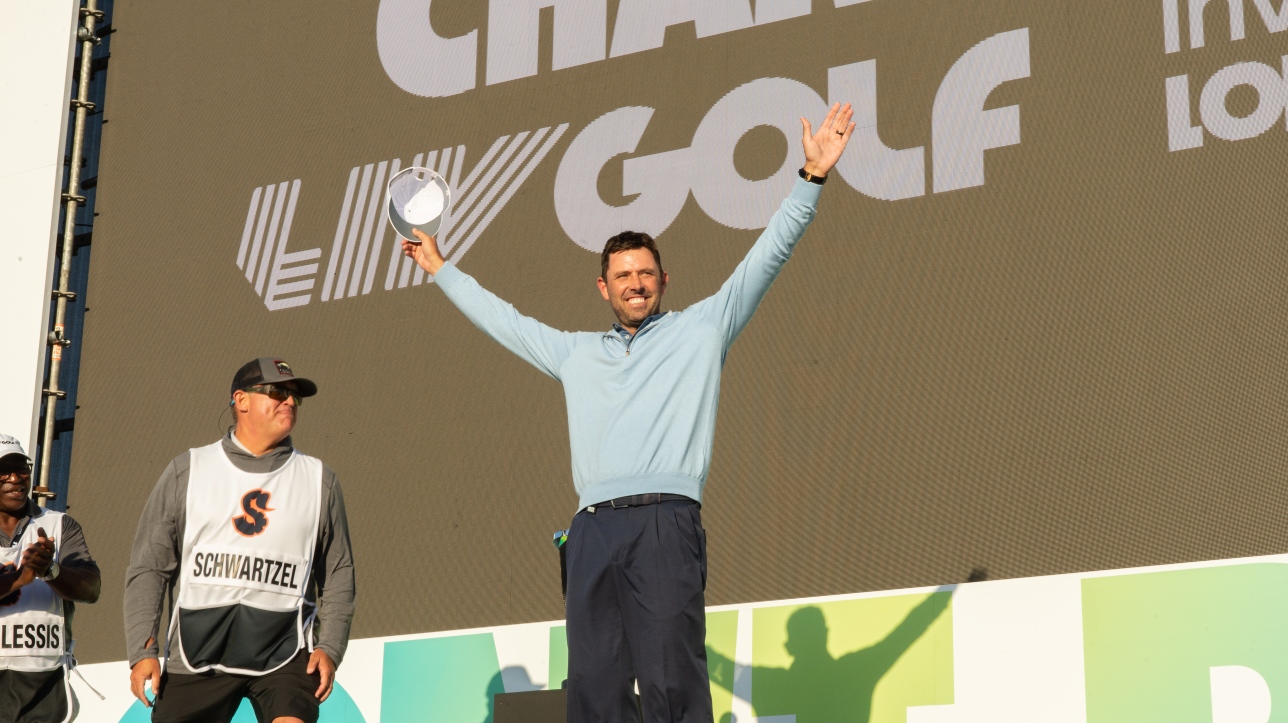 ST ALBANS, UK – The curtain fell on Saturday in North London on the first round of the titanic battle between the dissident LIV Golf Series, funded by Saudi Arabia, and the sacrosanct PGA Tour, the supreme body of the North American circuit.

South African Charl Schwartzel, 126th in the world rankings, will remain the first winner of a LIV tournament, with an unbeatable return on investment: 4 million dollars in earnings for three days of competition and 54 holes alone, against four days and 72 holes for a “normal” tournament.

Not to mention the other Major winners, such as Schwartzel himself (2011 Masters Tournament), Sergio Garcia, Martin Kaymer, Graeme McDowell and Louis Oosthuizen. Two more will join the list, later this month in Oregon, for the first LIV stop in the United States: Patrick Reed and above all Bryson DeChambeau.

Banned by the PGA

All of these top players – including Americans, the subject of virulent criticism from a 9/11 family association that holds Saudi Arabia responsible for these attacks – are already banned from the PGA Tour, or on the verge of being , as announced by his boss Jay Monahan, but not the United States Open scheduled … next weekend (June 16-19) in Brookline (Massachussetts), which will further fuel the debate.

Lawsuits will follow and lawyers rub their hands, because Mickelson, Johnson and others believe they are self-employed and have the right to play where they want, when they want, especially if they are paid (very expensive) for their services.

The figures are already staggering: at each of the eight stages of the LIV circuit a minimum of $ 25 million will be distributed to a field of 48 players, the total expected for this entire inaugural season of $ 255 million.

Crazier still, Mickelson reportedly received a $ 200 million bonus for his commitment, and Johnson $ 150 million, sums that have not been denied by those concerned. In 2024, Greg Norman expects an overall budget of $ 2 billion for 14 events.

Greg Norman has already won his bet, although some resisters have already declared themselves, starting with Rory McIlroy, Justin Thomas and Scottie Scheffler, the current number 1 in the world. They will complete a less well-endowed Canadian Open this Sunday at 1.56 M $ USD for the winner, counting for the PGA Tour … and the world ranking!

Golf on the field?

Norman, nicknamed “The Shark” when he was a player, supports a “free and open market” in golf and is ready to support his former co-workers by paying any fines.

Star of the European team in the Ryder Cup, the extravagant Ian Poulter, famous for his plaid trousers, was in St Albans this week. He is ready to appeal his suspension by the PGA. For him it “makes no sense” to limit the choice of events by the players.

Another topic at the center of this discord, the world ranking, because the PGA Tour is not ready to give points for the LIV Golf tournaments to the players it has suspended or banned. While the DP World Tour (ex European Tour), delighted with the possible windfall, has not yet commented on the topic.

The points on the world rankings are all the more crucial as they determine the guest list for the four Majors tournaments, the ones that build the players’ reputation and their place in golf history. The US Open said OK for this year, but there are two more scheduled this year, including the British Open in St Andrews.

The ongoing debate on respect for human rights in Saudi Arabia remains. Mickelson preaches that golf can do things, in the right direction, like Formula 1 promoters when they visit Jeddah. The LIV Golf Series saga has just begun.