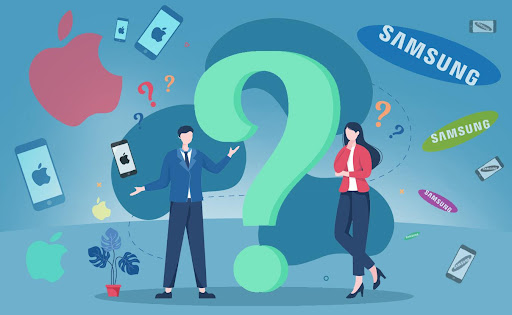 This question arises every year, only the number changes … In 2022, Apple and Samsung have once again achieved unthinkable technological feats, releasing smartphones of a quality never seen before, with performances that a few years later we thought were unimaginable. .

Here we are going to try the difficult exercise of comparing these two Smartphones, hoping that this will help you choose the model that suits you best.

The difference is minimal, but it exists and leans in favor of the Galaxy S22:

As you can see, the difference in size is anecdotal, and it would be exaggerated to make it a decisive selection criterion.

But the Galaxy S22 has a 120Hz refresh rate, while the iPhone 13 is stuck at 60Hz. This makes a noticeable difference in terms of the fluidity of the images, an important point if, for example, you like video games on a Smartphone.

The battery and autonomy

But the various tests have shown that for a similar use the Samsung consumes more battery than the Apple smartphone. In the end, it is the latter that offers the greatest autonomy.

It should be noted that both the Galaxy S22 and the iPhone 13 offer wireless charging.

The quality of the photos

Both devices have an excellent configuration, albeit different and therefore difficult to compare. In the absence of a direct comparison, we must therefore consider more subjective criteria:

It is the status quo on this point, the two Smartphones that today offer the best:

The Samsung Galaxy S22 runs on an Exynos 2200 processor, while the iPhone 13 runs on an Apple A15 Bionic.

Tests have shown it: Apple’s processor is more efficient. Do you hear it when using your smartphone? Not really … but the power reserve is there, and that’s a good sign.

Apple has not yet integrated a fingerprint reader on the iPhone 13 (we are talking about it for the iPhone 14) and continues to rely solely on facial recognition.

For its part, Samsung offers the fingerprint reader on the Galaxy S22, but also facial recognition and iris recognition.

Both the iPhone 13 and the Galaxy S22 are compatible with a large number of accessories, which allow you to further enhance the experience you will have of your Smartphone.

From protective case to wireless charger, through headphones or tripod, here you will find everything you need, both for Apple and Samsung smartphones.

No surprise here, and the debate is not between Samsung and Apple, but between Android and iOS.

Each system has its advantages and disadvantages: it’s all a matter of taste and, above all, of each one’s habit.

The purchase price is very similar and makes no difference.

On the other hand, the iPhone only works with compatible Apple products while the Galaxy S22 can be used with standard accessories. This is particularly evident in the cables.

In this sense, the Galaxy S22 is much cheaper than the iPhone 13, unless you already have all the accessories.

There are no major differences between the two models, which would allow us to say that one is better than the other.

Ultimately, what can guide your choice is your habit. If you already have an iPhone it is better to stick with Apple, while the lucky owners of a Samsung Galaxy have no reason to change brands.