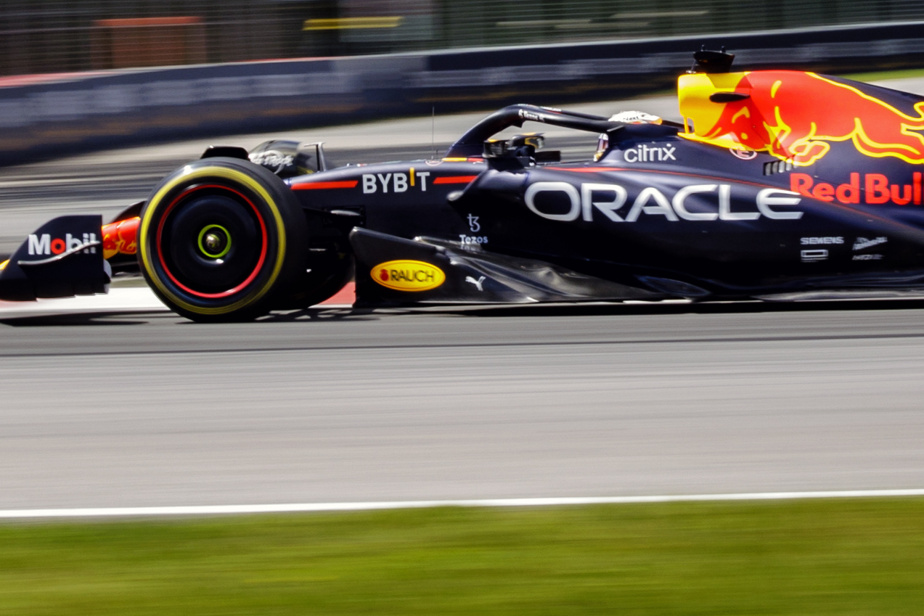 Dutchman Max Verstappen, on Red Bull, dominated the first day of free practice on Friday of the Canadian Grand Prix. The reigning world champion completed his best lap in 1 minute 14,127 seconds, beating his closest rival, Monegasque Charles Leclerc in a Ferrari by 0.081 seconds.

On a circuit where he never felt particularly comfortable, Verstappen had a problem-free day. Quickly finding the settings that gave his car a good balance, he first set a few fast laps, before concentrating on multi-lap sequences to prepare for the race.

Really good day. We were immediately comfortable with the soft tires and this allowed us to work at our pace, calmly, during the two sessions. There is still some work, of course, but I think we are in a great position for the rest of the weekend.

Dominated by Leclerc in qualifying for four races, Verstappen believes in his chances this Saturday. “We have found some tricks to reduce the lap time and I can’t wait to see where we arrive. [samedi] against Ferrari. There are obviously chances of rain, but it will be the same for everyone “, concluded the 24-year-old driver before running for cover, the first drops of a big storm begin to fall on the paddocks of the Gilles-Villeneuve circuit.

For his part, Leclerc was less serene. The Ferrari driver risks the possibility of receiving more penalties on the starting grid for changing the engine; what caused his abandonment in Baku last Sunday, being irreparable.

The Monegasque has already reached the limit prescribed for the whole season for the various elements of the engine of his Ferrari and, depending on the elements that he and his engineers decide to replace before qualifying, he could be penalized by 10 places or even have to start in bottom of the group.

We still have several things to consider in order to make the best decision. In addition to qualifying, we need to find the strategy that will allow us to achieve the best possible result on Sunday, regardless of where we start on the grid.

The # 16 Ferrari raced most of the day on soft tires, a sign that Leclerc and his team are considering an aggressive strategy to climb the standings in the opening laps of Sunday’s Grand Prix.

Behind the two most prominent drivers at the start of the season, the surprise came from Sebastian Vettel, who surprised fourth at the wheel of his Aston Martin. In great progress for some races following the introduction of a modified version of the car, a two-time winner in Canada as well as finishing first in 2019 before being relegated to second place, the German is visibly satisfied in Montreal and could do well on Sunday.

His teammate Lance Stroll settled for 12And place, but also showed good pace, especially in the first session.

We were very competitive as a team and this bodes well for the rest of the weekend. Now we will have to maximize our chances in qualifying.

Vettel and Stroll were also called up by the race direction after practice, along with Frenchman Pierre Gasly, for failing to comply with a directive on how to negotiate the escape route at turn 14 at the end of the straight.

Less convincing on his Williams was the other Canadian, Nicholas Latifi, who finished the day in 19th positionAnd ranking, the penultimate, taking advantage of the fact that the Finnish Valtteri Bottas had not managed to complete a single lap.

The Torontonian was realistic: “Our performances are disappointing and we still have to work hard to progress a little. It is still very special to race here this weekend. I really feel the support of the public and hope to use it to do my best. ”

The FIA ​​uses the free practice of the Grand Prix to collect data relating to the porpoising of the cars, which are equipped with sensors that measure the vibrations and vertical movements of the chassis. This is the first step in the process that should ultimately lead to the adoption of a specific limit.

As several observers have pointed out, this is a complex process, as there is a great deal of subjectivity in assessing an “acceptable” limit beyond which the safety of the pilots is at risk. Teams and drivers are divided on the issue and it will likely take long discussions before everyone agrees on the new rule and its application.

One thing is certain, the phenomenon is still very real and several drivers have complained about the jumps of their car. Briton Lewis Hamilton, whose comments prompted the FIA ​​to intervene, said his Mercedes was never “this bad”.

I’m not sure the new rules will help him much …