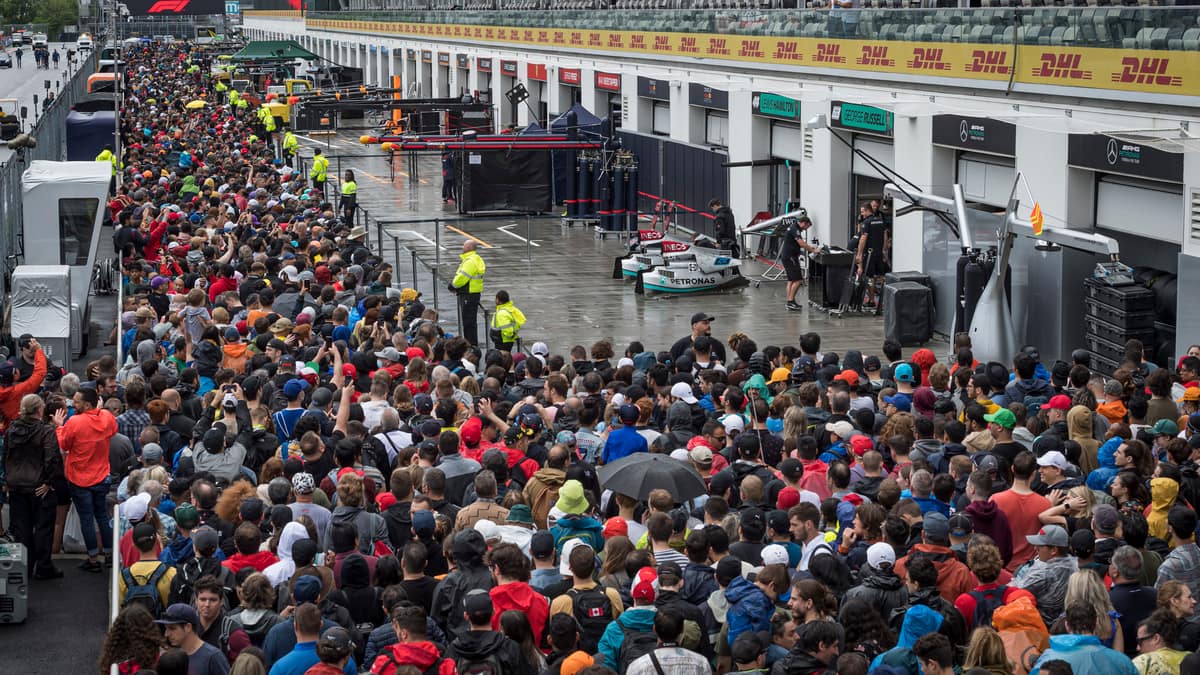 Motoring enthusiasts flocked to the gates for the first day of activity of the Formula 1 Grand Prix of Canada, near the Gilles-Villeneuve circuit. Despite the rainy episodes, organizers had a record audience for Thursday’s open house.

• Read also: The great F1 circus is back in Montreal

• Read also: “I feel like the number 1 pimp in Montreal” – François Dumontier

• Read also: “A smoke show”: a petition is circulating for the 2022 edition of the Grand Prix to be the last

Quebecers and international visitors missed the Montreal event. About 20,000 supporters were admitted to the site and the swarm had to be turned back around 10:15 am, just an hour after the gates opened. The huge crowd also gathered near the Casino on the other side of the bank.

Usually 5,000 or 6,000 people pass through the turnstiles for that day. The previous record was 10,000 people, organizers said.

This year, the drivers were not supposed to show up in the pits and paddocks on Thursday. Some still made an appearance, such as Mick Schumacher and Nicholas Latifi.

The doors are open, some would not miss it for anything in the world. Sylvain Côté is originally from Quebec and has not missed any edition of the Canadian Grand Prix since 1978.

Mr. Côté has participated in several significant events over the years. He remembers the “magical” victory of Jean Alesi in 1995, Jacques Villeneuve in 2018 at the wheel of his father’s Ferrari, the illustrious Gilles, or the fatal accident of Riccardo Paletti.

“Each year always has its own particularity. […] I would do everything to not miss anything here at the Grand Prix “, assured the 50-year-old.

However, he had never seen so many people in the wells. Impossible to move without bumping into someone. According to him, it could be a backlash to the popular Netflix series “Drive to Survive”.

“Usually the weather is nicer. This year it rains and there are too many people. The “Netflix effect” has its advantages and its great disadvantages, like today. Previously, you could walk around and the box row is smaller, ”said Mr Côté, who is nevertheless happy to see bigger stands for amateurs.

For many, the Canadian Grand Prix is ​​also synonymous with nostalgia. Eric Heldman, an Ontario, has more than fifteen visits to the Gilles-Villeneuve circuit. He will go there this year with an Aston Martin shirt bearing the name of Quebecer Lance Stroll.

“I have participated in several races and this is one of my favorites, for the atmosphere and everything that surrounds it. It’s impossible to beat Montreal, “explained the 50-year-old, who is attending the festivities with a friend.

Despite the gray weather, the charm of the Quebec metropolis is undeniable. Neel Amin from New Jersey fell in love with the setting of the event. He brings his 8-year-old son there for the first time.

“When you think of Formula 1 in the Americas, Montreal comes right away. In the United States it is more recent, while [ce Grand Prix] it is historical in nature ”, concluded Mr. Amin.

The table is therefore set for the race weekend. Around 350,000 fans are expected in the coming days.