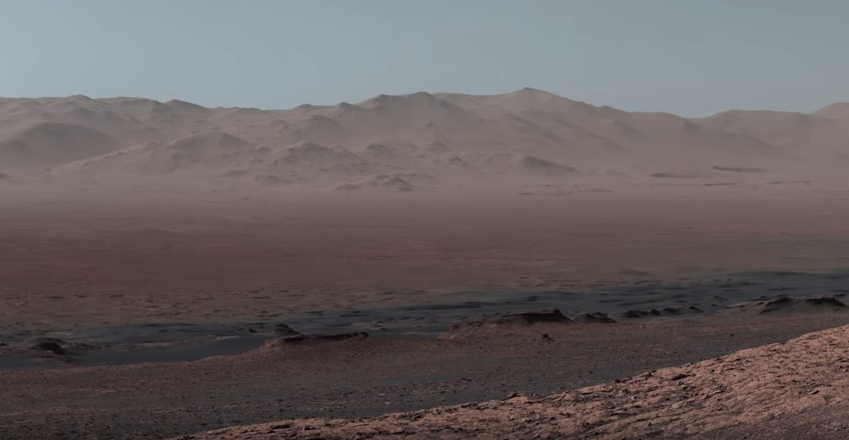 Mission teams from the Curiosity rover measured the levels of total organic carbon (a key component of life molecules) in Martian sedimentary rocks for the first time. These samples were taken from the Gale crater which once housed a huge body of water.

If the surface of Mars is today inhospitable for life, we know that the climate was more similar to that of the Earth several billion years ago thanks to a dense atmosphere that favors the presence of liquid water. . Scientists therefore believe that if it had ever evolved, Martian life could have been supported by key ingredients such as organic carbon which is the basis of the organic molecules created and used by all known life forms.

Note, however, that organic carbon does not necessarily prove the existence of life. These compounds, in fact, can also come from non-biological sources, such as meteorites and volcanoes, or be formed in situ by surface reactions.

That said, the researchers have already isolated organic carbon on Mars. However, previous measurements either only provided information about particular compounds or represented measurements that captured only a fraction of the carbon in the rocks. As part of a multi-year study, the Curiosity rover teams decided to measure the total amount of organic carbon in these rocks.

To do this, Curiosity drilled rock samples from a mudstone, a class of sedimentary rocks formed by fine-grained silica that are 3.5 billion years, in the Yellowknife Bay formation of Gale Crater, the site of an ancient lake on Mars. Curiosity then presented the sample to its analysis tool, called SAM. Basically, it looks like a furnace capable of heating rock dust to progressively higher temperatures.

For this experiment, the instrument used oxygen and heat to convert the organic carbon in the samples into carbon dioxide. From the amount of CO2 produced, the instrument then calculates the amount of organic carbon contained in the original sample and indicates the isotope ratio exact (isotopes are forms of the same chemical element that differ in the number of neutrons in their nuclei). This allows scientists to do this understand the source carbon.

The energy-intensive experiment was conducted in 2014. It took years of analysis to understand the data and put the findings into the context of the mission’s other findings.

In their study, the researchers explain that they have at least identified 200 to 273 parts per million of organic carbon. ” For comparison, it is comparable to the amount found in rocks in parts of the Atacama Desert in South America and more than that found in Mars meteorites.“says Jennifer Stern of NASA.

Unfortunately, in this case, the isotopic composition cannot help researchers determine which part of this total carbon represents organic carbon and which part is mineral carbon. A biological source cannot be completely excluded. However, the isotopic range overlaps with that of igneous (volcanic) carbon and that of meteoritic organic matter.

However, other signs suggest that Gale Crater may have claimed life. On site, researchers have already isolated the presence of chemical energy sources and chemical compounds such as oxygen, nitrogen and sulfur. Basically, this place would then have offered an environment conducive to life, provided it appeared in the first place.