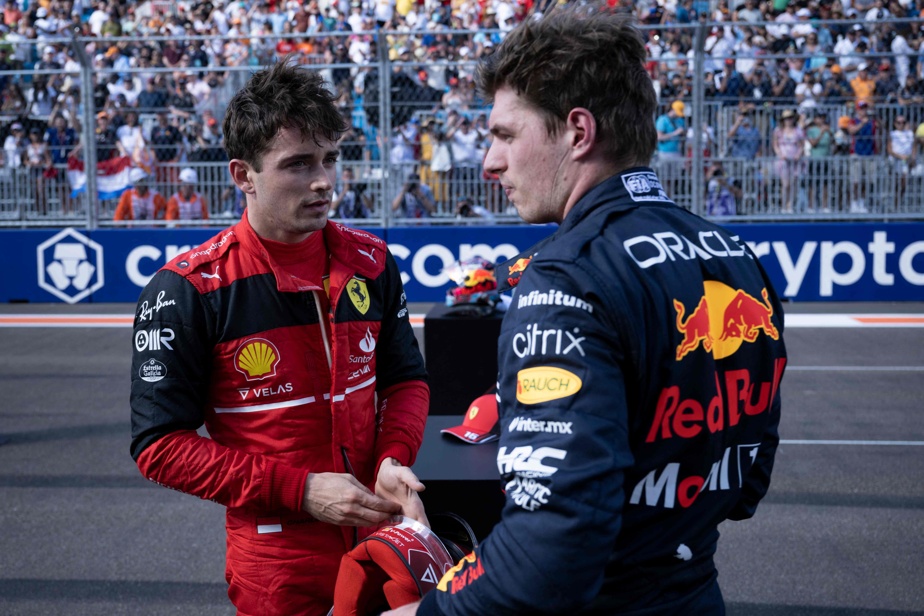 Lewis Hamilton was expected against Max Verstappen this season. Then Verstappen against Charles Leclerc. Rather, here we are at the center of a Red Bull fratricidal duel between Verstappen and Sergio Pérez.

Last weekend, Charles Leclerc had to retire when smoke rose from his engine at the Azerbaijan Grand Prix. It was his second retirement in three races, a blow in his title hunt.

But Leclerc and his Ferrari will want to recover quickly in Montreal in front of an audience conquered by the days of Gilles Villeneuve. Perhaps to send a message: the future of Formula 1 in fact passes through Leclerc and Verstappen. The shock will wait, but it will eventually come.

On the one hand, the reigning world champion, Verstappen. A 24-year-old Dutchman who has developed at lightning speed since he entered the circuit at the age of 17. He already has 66 podiums in 149 races. Raised in Formula 1 with his father Jos, he moved from the Toro Rosso development team to Red Bull in 2016.

On the other hand, a 24-year-old Monegasque who at the start of the season only had 13 podiums in 81 races, but who had to reach the top someday. A driver who is finally enjoying a high performance car after two difficult years. A charismatic athlete who can finally show the extent of his talent.

The new generation. Verstappen has 150 points, Leclerc has 116.

The portrait can change quickly in Formula 1. It is also the Ferrari driver who was in the lead until two weeks ago.

Leclerc started the season in a great way by winning the first Grand Prix in Bahrain. Verstappen, chasing him all the way, had to retire with three laps to go due to various problems with his car.

Seven days later, he was the one to take his first triumph of the season after playing cat and mouse with Leclerc in the final laps at the fast Jeddah circuit in Saudi Arabia. Red Bull thus launched its season.

The two rivals showed up in Melbourne, Australia, each with a time trial victory. And it was Leclerc, dominant, who had the last word. He also became the first Ferrari driver since Fernando Alonso in 2010 to win the Grand Slam (first in qualifying, first in race and fastest lap) in a car race. Verstappen, once again the victim of a mechanical breakdown, had to retire at 39And around when until then he had been in second place.

The triumphs of Verstappen

The next three Grands Prix were Verstappen’s story. The Dutchman completely dominated the Emilia-Romagna race, as Leclerc, guilty of a mistake, was relegated to sixth place. Verstappen then ran a clear lap in the scorching Miami heat to win the first Florida Grand Prix in F1 history. In front of Leclerc.

This same Leclerc, struck by a mechanical problem, retired at 27And tour in Spain. His rival took the opportunity to take his third consecutive victory and take first place in the drivers’ championship.

The action then moved to Monaco, home of Leclerc. For the first time this season, neither the Monegasque nor the Dutchman were the first to cross the finish line. Instead, it was the other Red Bull driver, Sergio Pérez, who got his hands on his third career win and invited himself to the title race.

The Ferrari team made a serious mistake on 22And turn asking Leclerc, then first, to enter the pits when Carlos Sainz Jr. was already there. The furious Monegasque had to settle for fourth place, behind Verstappen.

The Azerbaijani Grand Prix was the fatal blow: the retirement of Leclerc’s Ferrari, combined with Pérez’s second place, overturned the hierarchy. So here we are at the center of an internal Red Bull rivalry.

Perez in the race

If Pérez evolves in Verstappen’s shadow since his arrival at Red Bull, he remains an experienced driver. With one win and five podiums this season, “Checo” nudges the leader.

“He’s in the race as much as Max,” Red Bull boss Christian Horner told Sky Sports. The difference between the two is nil. He and Max have been much closer this year. ”

Pérez signed a two-year contract extension in May. Since joining Red Bull last season, the 32-year-old has acted as an excellent teammate for his young colleague. Suffice it to recall the last race of the 2021 season, when he slowed Lewis Hamilton to allow Verstappen to close the gap with Mercedes.

“He is an incredible teammate,” said Verstappen after winning his first career title.

As proof, on May 22, in Spain, Pérez was leading the race when he was ordered to be preceded by Verstappen at 49And round. He obeyed. But will it always be so conciliatory?