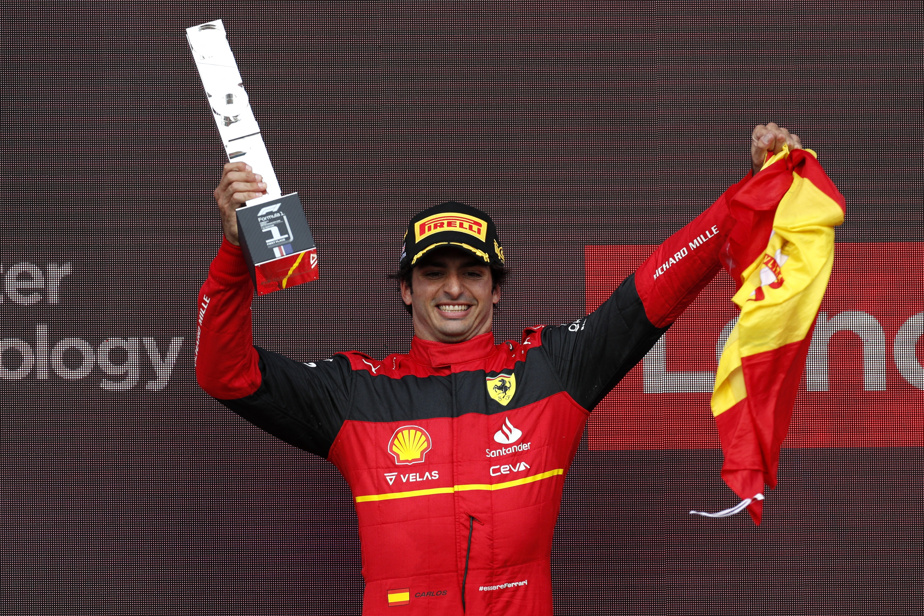 “It’s a day I’ll never forget. After an absolutely thrilling race at Silverstone, Spaniard Carlos Sainz Jr. got his hands on his first career win on Sunday.

This is the first victory in 151 Grands Prix for the Ferrari driver, who had obtained five podiums in nine races since the beginning of the season. In the end he triumphed in what proved to be the busiest race since the start of the season.

On the podium, the 27-year-old closed her eyes and smiled, as if she was enjoying the moment to the fullest.

“I don’t know what to say,” he said into the F1 microphone. It’s incredible. First victory, 150 races later, with Ferrari, at Silverstone… I couldn’t ask for anything better. ”

It was Red Bull driver Sergio Pérez who took second place. The Mexican had a difficult start to the race, having to change the front wing after contact with Charles Leclerc. He came out in last place, but worked his way up to his sixth podium of the season.

“We never gave up, we just kept pushing, over and over,” he said. The opportunity presented itself at the end and we took it. ”

To the delight of the 400,000 spectators attending Silverstone, British Lewis Hamilton took third place. Third podium of the season, tenth consecutive at Silverstone, for the seven-time world champion.

“I gave it my all,” he said. I tried to chase the Ferraris, but congratulations to Carlos. They were just too fast for us today and in the end it was a great fight with Checo [Sergio Pérez]. I am so thankful for all the hard work the team put in to bring an update [sur la voiture], which allowed me to get close to them today. ”

The British Grand Prix started with concern. If the start was correct at the top of the grid, it is the opposite at the center of the group. Pierre Gasly’s AlphaTauri hit the rear of George Russell’s Mercedes, which in turn made contact with Zhou Guanyu’s Alfa Romeo. Guanyu’s car traveled a long distance upside down before completely crossing the wall.

The red flag is immediate. Everyone held their breath for a good fifteen minutes before Alfa Romeo confirmed that their driver was conscious. He was evacuated by ambulance. The 23-year-old Chinese was saved from the halo over his head. At the end of the race he was back on his feet in the paddocks.

Alexander Albon (Williams), also involved in the accident, was taken to hospital for “precautionary examinations,” the International Automobile Federation (FIA) said. Albon, Russell and Guanyu did not start the restart, which took place an hour after the interruption.

We were treated to a fresh start with the original grill. In attack, Carlos Sainz Jr. (Ferrari) resisted a persistent Max Verstappen (Red Bull). Behind them Charles Leclerc (Ferrari) got the better of Sergio Pérez (Red Bull), who had to pit to change the front wing. So he fell to the bottom of the group.

At 10 o’clockAnd in turn, a pilot error of Sainz Jr. allowed Verstappen to sneak up on him. But the race had just begun… Two laps later, the reigning champion started to slow down. One of his tires was damaged after hitting a piece of carbon. He came out of the pits at 6And row, while the two Ferraris and Lewis Hamilton’s Mercedes took the reins of the race.

The abandonment of Esteban Ocon (Alpine) at 39And compulsory lap at the exit of the safety car. The last 13 laps were completely insane. Sainz Jr., then second behind Leclerc, overtook his teammate, who was slower on hard tires. Behind them, Sergio Pérez – who had recovered from a difficult start – overtook Hamilton to take third place.

The five leaders fought a frenzied battle, hoping to reach the podium. Pérez and Hamilton finally got the better of Leclerc (4And), Fernando Alonso (Alpine, 5And) and Lando Norris (McLaren, 6And). Verstappen took the 7And rank.

Quebecer Lance Stroll lost a point to finish on 11And rank. The Torontonian Nicholas Latifi, who started 10And on the grid – his best starting position in his career – he achieved his best result of the season, a 12And square.

Pierre Gasly (AlphaTauri) and Valtteri Bottas (Alfa Romeo) both gave up along the way.