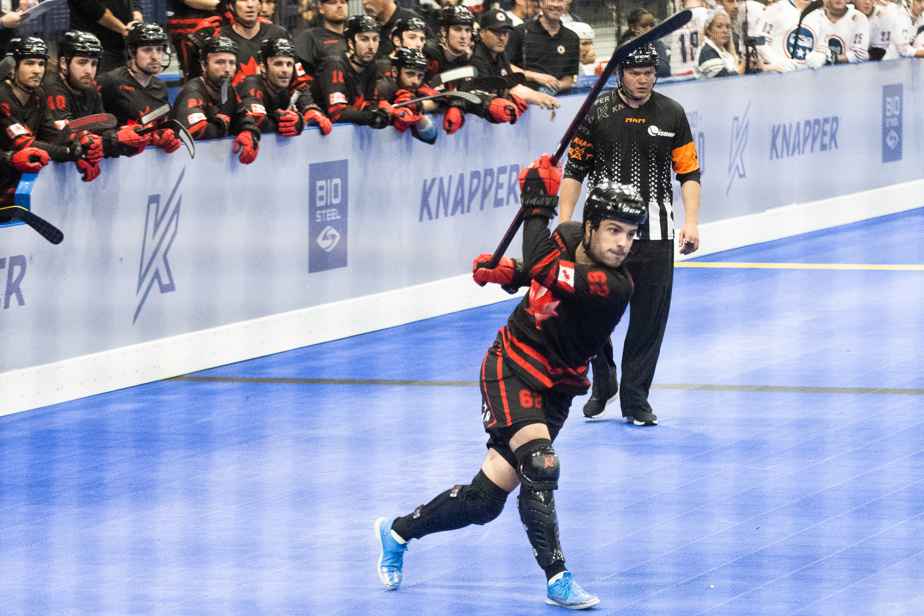 In the winter, Danick Martel is a professional hockey player. In the summer, he is one of Canada’s best ball hockey players. His mission: to promote the growth of a sport that, in his opinion, deserves more attention.

The ball hockey world championship started Monday at Place Bell in Laval. Sixteen teams compete there until June 27 to determine which is the best nation in the world.

Shortly before playing his first match, against his American rivals, Danick Martel was feverish, in the corridors of the amphitheater, at the idea of ​​reconnecting with his other great passion, in such a competitive context.

A week earlier, Martel’s season had ended with Laval Rocket, but he quickly swapped his skates for athletic shoes. 27-year-old Drummondvillois’ mission: to sell hockey balls to Quebecs. “Bringing the World Championship to Canada will help us get to know each other. […] To return this year with many Quebecs in the team, at home, we must take the opportunity to send messages and try to convince young people, because they are our next generation, “explained Martel.

Ball hockey is not yet recognized at its fair value, he believes. The Place Bell spectators are mostly ball hockey fans.

Even if the facilities are magnificent, the fact remains that the frenzy around this discipline is not the same as in Europe.

“When we played in Slovakia against the Slovaks in the final a few years ago, there were 10,500 people in the stands with the drums, as if it were a football match. It is certain that it is a slightly different experience, “says the forward.

However, ball hockey is accessible to everyone. He says there is no reason why Canada shouldn’t be more enthusiastic about the sport: “There are players who don’t know how to skate, but have good hands, run well and are among the best ball hockey players, as is the case. than the Slovaks or the Czechs. There aren’t many ice players playing for them. ”

The best of workouts

For Martel, ball hockey has been a passion since he was 6 years old. His father is involved in the world of field hockey (hockey deck) in Drummondville, grows parallel to his interest in the discipline.

He is now recognized as the best player in Canada. He will still need a little adaptation period: “It’s really my attack team that stands out, so I try to use it a lot. Every year, at every tournament, you have to challenge yourself again. The boys have been training for this for two years. Me, it’s been eight months since I ran, it’s been eight months since I touched a ball. ”

In the end, Martel only took 22 seconds to adapt, as he opened the scoring early in the first period against the United States. He added two assists to his record to help the team win 6-5.

It was out of the question for him to miss this event. While some professional players fear the risk of injury, Martel thinks more about the advantages.

“You can go to the gym and twist your ankle or drop a weight on your foot and break your foot. Anything could happen. I’ve never had a ball hockey injury. Small sores, it bothers me less. “

It’s intense, so right on the ice, afterwards, you manage to be solid in the corners and have a little dog in the nose. So yes, ball hockey makes me a better player on the ice.

Martel also alludes to his cardio and physical fitness in general, which have always been his greatest strengths and which helped him a lot on his journey: “In my youth, my summer training went through ball hockey. I could play a dozen games a week. I think it’s better for me to do cardio than just weight training. For me it’s much better and much more enjoyable, ”he remembers.

Until the final, Martel will have the advantage in ball hockey. He will still have to think about his future in the American League. He is looking for a new contract and his greatest desire would be to sign a new agreement with the Rocket: “It ended well with Montreal, for sure I would like to have a contract with them. I’ve always wanted to be content with a team in the long run. ”