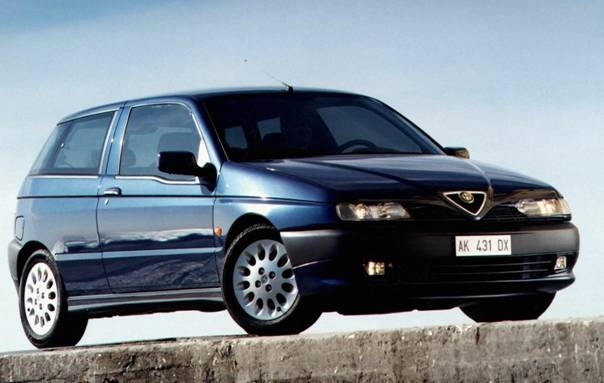 To say that we did not appreciate the acquisition by Fiat, by Alfa Romeo, at the end of 1986, is an understatement. Ford was in contention, and the Italian giant, having heard of the operation, did everything to recover it … at a lower cost, moreover. However, the case is not bad for the Milanese team because the Turin player has much more modern technical bases than those of the blue oval. Starting with that of the future Tipo, released in 1988.

It will be used for many models, especially in the Alfa, first the 155 which, in 1992, replaced the antediluvian 75. But there is also the urgency to replace the 33, technically outdated (derived from the Alfasud … of 1971 ). Thus, we recover a project originally planned for… Lancia. In fact, Chris Bangle, then a Fiat designer, had started working on a replacement project for the Lancia Delta. Fiat style chief Mario Maioli saw him and reassigned him to Alfa. There Walter de Silva’s teams finalize the car, and transform it into a 3-door: it will be the 145. Subsequently a 5-door will be created, the 146. The first is presented in April 1994, the second in October 1994.

Under the hood, the flat four of the 33 is renewed, but modernized, in 1.3 (90 HP), 1.6 (103 HP) and 1.7 (129 HP). It is the only engine to be installed longitudinally in the Tipo platform. Two finishes are offered on 1.3 and 1.6, normal and L. While power steering and airbags are standard on both, only the L is entitled to front power windows, height-adjustable steering wheel and seats, or even painted shields. To this, the 1.7 adds ABS, alloy wheels and sporty decorations.

Which version to choose?

Given the low price difference, we will be tempted by 1.7, but it is very rare. So we can fall back on the 1.6 without fear, the 1.3 really has trouble pulling its weight.

There will be the rare 1.7 in no uncertain terms, especially at low mileage.

The proven Boxer engines have proved to be very reliable in these cars. They alone have two timing belts each to be renewed every 80,000 km, which comes at a certain price. There are also cases of capricious idle actuators, but nothing serious. The gearbox is also solid, even if, after 150,000 km, the synchronizers of 2 and 3 begin to creak a little.

Nothing special to report on the suspension side, which ages normally, while corrosion is well under control on these cars. Obviously, given their age, an inspection of the rocker panels and rear wheel arches will not be superfluous.

It is true that the interior of the 145 1.6 L is not very joyful or well finished. But the table is well laid out, and the driving position is excellent. At start-up we recognize the typical melody of the Alfa Boxer, and only that makes you smile! Flexible and soft, it always shows good will, even if we feel that the weight cuts its wings a little. Attention, this block always delights with its character and its propensity to take turns, giving the 145 a special atmosphere.

The frame? It’s the Tipo’s, so it’s very good for the time. Consistent and precise steering, faithful front axle, good overall balance, well-calibrated damping – more power would be welcome! For its part, the braking is very discreet.

Replacing the notable 1983 Alfasud, the 33 incorporates its technical elements (platform, suspension, engines) but simplifies some aspects such as the brakes. More spacious and practical, it isn’t as fun to drive due to its heavier weight and softened suspension. But its excellent boxer engine continues to sing just as well!

From the small 1.3 l with 79 hp to the powerful 1.7 l with 137 hp that appeared in 1990, the 33 benefits from performances that are often superior to those of the competition. Improved in 1986 (chassis, presentation) it was then extensively redesigned in 1989 (front and rear redesigned). It was available as a Giardinetta station wagon since 1984 and benefited from an engageable 4×4 transmission. The Italians will even be entitled to a version equipped with a 3-cylinder VM turbodiesel.

Old fashioned but constantly improved and benefiting from a varied range, the 33 will finally sell well, until its discontinuation in 1994. It’s in the old pots … Nearly 980,000 units will be produced – not bad! From € 2,500.