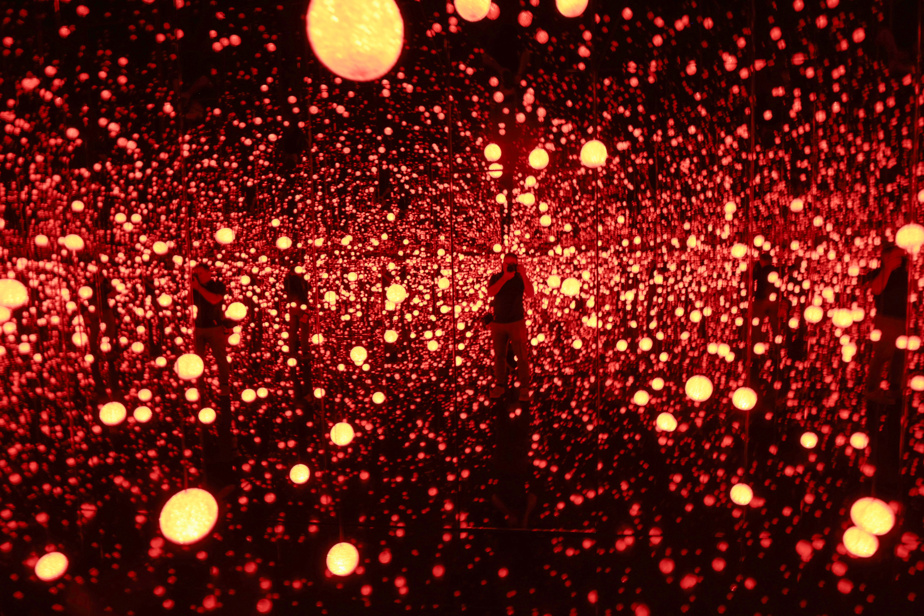 This is the visual arts event in Montreal this summer. The exhibition of the works of Yayoi Kusama is presented free of charge this Wednesday at the Phi Foundation, on the occasion of its 15And birthday. But beware, it’s sold out until July 31st! More tickets will be distributed on July 15, so that you can go play in August with the Japanese artist’s colorful dives.

A ballet of lights soaring in the universe [Dancing Lights That Flew Up to the Universe] is Yayoi Kusama’s first solo show in Quebec. The internationally renowned artist is now 93 years old and lives in Japan. You still produce works. The Phi Foundation has partnered with her New York gallery (David Zwirner) to present a selection that reflects her journey.

Yayoi Kusama’s specialists will have fun rediscovering the atmosphere of his dives and some of his paintings and pumpkins, but the exhibition is aimed primarily at an audience that does not know the artist or who knows little about him, especially young people. This distribution, at 451 and 465, rue Saint-Jean, is particularly recommended for children of all ages, as the universe of Kusama is so playful, magical, sparkling and beneficial.

In the first room at 451 rue Saint-Jean are his famous pumpkins, the fruit of his youth spent in the heart of his parents’ nursery. However, it was her grandfather who awakened her to the charm of cucurbits. At the age of 19 she had started painting, and then moved on to sculpture. Those presented in Phi are in polished bronze and lacquer, and quite large in size.

It is in the second room that we begin to enter its immersive universe with two types of closed cubic showcases that form mini observation rooms with mirrors ( peek into the rooms). We approach small round portholes and discover heaps of colors multiplied to infinity in which we distinguish the reflections of our face and that of the neighbor!

The third floor is an information room on Yayoi Kusama with a series of photographs, from his birth to today, to better understand his career. The books can also be consulted on site.

We then head to 465, rue Saint-Jean where, in the first room, eight paintings from the series My eternal soul [Mon âme éternelle]. Naive, childish and descriptive acrylics on canvas. With faces, profiles, eyeballs, amoebas, cell shapes and more. Colorful paintings that Yayoi Kusama made between 2013 and 2016.

The exhibition obviously ends with the two rooms of infinite mirrors, The splendor of souls (2014), and Dancing lights flying towards the universe, the most recent (2019), which gives its name to the title of the exhibition. These two immersive experiences are the signature of Yayoi Kusama. He has created about twenty of these small rooms in which he enters, preferably alone, and where his particular attraction to the cosmic world is better understood.

It would be a shame to reveal what one experiences upon entering these rooms. The images we offer you already provide some clues about the proven effects. Just a tip, when you enter the first space of the work entitled The splendor of souls, look where you put your feet, because there is water on the ground, on the sides. And she walks slowly through these spaces …

Before leaving the premises, go down to the basement of the building where Phi presents a participatory installation by the Montreal collective Doux Soft Club entitled blue position. An immersive environment created for the Kusama exhibition and made up of different elements, including abstract sculptures and playful furniture, which you can touch, lie on, meditate on or interact with. Everything is possible ! This installation is a good conclusion to a visit to the Phi Foundation, from which you come out lighter.

So don’t rush to 451 Saint-Jean Street if you don’t have tickets for the exhibition. It’s been several weeks since the July ones flew away. On July 15th, more tickets will be offered for visits in August (see link below). Same thing on August 15th and so on until the end of the exhibition, next January 15th. Enjoy your visit!