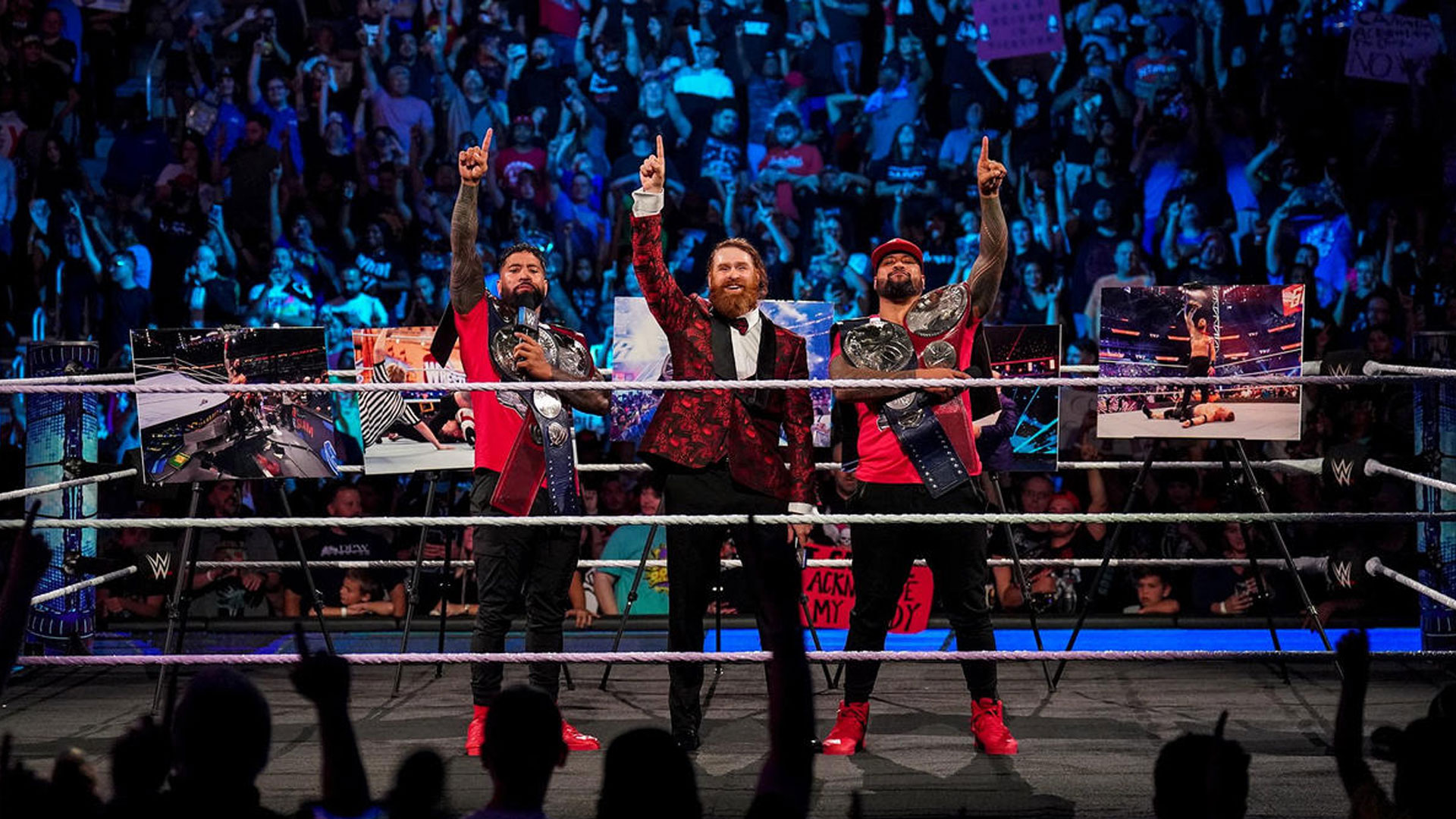 – Tonight is WWE SmackDown, the blue show begins with the arrival of the Viking Raiders followed by New Day for the first fight of the evening.

During the match, Kofi Kingston delivers a hammer blow from the third rope directly to Erik’s skull and then pinches, but that’s not enough.

At the end of the match, Kofi Kingston jumps from the top rope, but Ivar throws a shield in his face to render him incapacitated. Erik and Ivar take Xavier Woods and make him go through 2 tables outside the ring for the win.

– Part 1 of a video about Roman Reigns’ rise as Tribal Chief is released, with Paul Heyman narrating.

– After the commercial break, we have a recap of what happened last week with the Bloodline attack on Drew McIntyre.

– Behind the scenes we find Sami Zayn who tonight will be the master of ceremonies of the celebration of Roman Reigns’ two-year reign, with the Usos. Sami Zayn tells them that tonight’s celebration will be unique, as it is very rare to hold a title for that long. He says he prepared the photos for the occasion. Jey Uso cuts him off and says Paul Heyman should have been there tonight and asks Sami Zayn why he didn’t help him RAW against Kevin Owens. Jey calms down and says that Sami seems to have matters in hand for tonight and leaves.

– We have a Karrion promo accompanied by Scarlett Bordeaux. Karrion Kross tells us that tonight Drew McIntyre will think long and hard about what happened to him last week. Roman Reigns will celebrate his two-year reign and make Drew Gulak regret some things.

– The second part of the video on Roman Reigns is out.

– It’s time for the first Smackdown match for Karrion Kross who steps into the ring with Scarlett Bordeaux.

At the end of the match, Karrion Kross hits Drew Gulak directly in the head with a Saito Suplex, then follows with a Rear Naked Choke and ends with a pin for the win.

– We have a recap of what happened with Ronda Rousey during her arrest and tonight we will have the final decision regarding her fate.

– After the commercial break, we have the third part of the video on Roman Reigns.

– Now is the time to welcome Ronda Rousey who arrives in the ring with the documents. Ronda says she has an official statement from WWE HQ and she asks Adam Pierce to step into the ring. Adam Pearce steps into the ring and says that any decision he made against Ronda Rousey was never personal. Ronda Rousey replies that she is lying and asks him to read the letter she received. The letter says that despite Ronda Rousey’s behavior, she didn’t deserve to be treated like a criminal and therefore her arrest is totally unwarranted. Ronda Rousey is therefore on probation and is therefore reinstated. Ronda Rousey is happy and she asks Adam Pearce why she is making that face. Adam Pearce replies that he is sick of not being treated fairly and that his work is not recognized. He says he’s fed up with people like Ronda Rousey who he does a lot for, but who are ungrateful. He concludes by saying that Ronda Rousey is the biggest slut he has ever met in her life. Ronda approaches Adam Pearce who says he spoke a little too fast and it was due to stress. Ronda attacks him and applies a Jujigatame to him.

– We find Sami Zayn in the locker room receiving a bouquet of flowers. Sami Zayn is stopped due to the nauseating smell of these flowers then on the card we see written “Tick Tock”. Sami Zayn puts down the bouquet and pretends nothing has happened.

At the end of the match, Ashante Thee Adonis dropkick Mace and Top Dolla follows with a Belly to Back Suplex for the win.

After the match, Angel Garza and Humberto Carrillo circle the ring, which allows Mace and Mansoor to attack the two members of Hit Row when suddenly the Street Profits (Angelo Dawkins & Montez Ford) arrive to help out. Hit Row by getting rid of Angel Garza, Humberto Carillo and MMM.

– We have a recap of Ricochet’s victory over Happy Corbin.

– Backstage, Happy Corbin tells Kayla Braxton that he doesn’t want to talk about Ricochet’s miraculous victory, because he doesn’t live in the past. She says she has always known how to climb the track after having lived through difficult times and tonight she will have an open challenge.

– The fourth part of the video on Roman Reigns is out.

– Happy Corbin steps into the ring and it’s the King of Strong Style music playing.

At the end of the match, Happy Corbin slipped to find himself out of the ring, but on the way back he was greeted by Shinsuke Nakamura’s Kinshasa for the win.

– We have a recap of Raquel Gonzalez and Aliyah’s victory in the Women’s Tag Team tournament final against IYO SKY and Dakota Kai.

– Behind the scenes, we find a disappointed Happy Corbin when suddenly a limo with JBL ropes pulls up next to him and a voice asks him what is happening to him and asks him to get on. The limo leaves with JBL and Baron Corbin on board.

At the end of the match, Ludwig Kaiser tries to land a Swinging Reverse DDT, but Butch grabs his fingers and breaks them, then follows with his Bitter End for the win.

After the match, Sheamus and Gunther are ready to get a move on, but Ludwig Kaiser convinces his partner not to and they leave.

– We have the fifth and final part of the video about Roman Reigns’ exploits over the past two years.

– In the locker room we find Sami Zayn and the Usos. Jey Uso says we have to go to the ring, but Sami Zayn thinks we’ll have to wait for Roman Reigns for entry with the entire bloodline. Jey Uso gets angry and says why he enters the lot by saying the whole bloodline. Jimmy calms everyone down and says tonight is a party night for the tribal chief.

– A video of Tyson Fury is released announcing his front row presence during Clash at the Castle in Cardiff this Saturday.

– Sami Zayn and the Usos arrive in the ring and welcome us to the celebration of Roman Reigns’ 2 year reign. Jimmy Uso asks the honorary member of Bloodline to do his job as a presenter, but Jey Uso does it for him. Jey says for 2 years Roman Reigns decimated anyone who stood in his way. He defeated them all with Superman Punch, Spear and Guillotine. The three men then ask all fans to stand up to welcome the Tribal Chief and current WWE undisputed champion. On the titantron, we see Roman Reigns getting out of his car when he is suddenly knocked out by a Drew McIntyre Big Boot who then steps into the ring, knocks out Sami Zayn with a Glasgow Kiss then a Claymore Kick and destroys the Usos with a Throw in Roman Reigns mode against the barricade imitating the same gestures as the Tribal Chief.

Drew McIntyre then takes the microphone and says that in Clash at the Castle he will deactivate the tribal leader’s God mode and tear his head off to become the new champion.

The show ends with the celebration of Drew McIntyre.