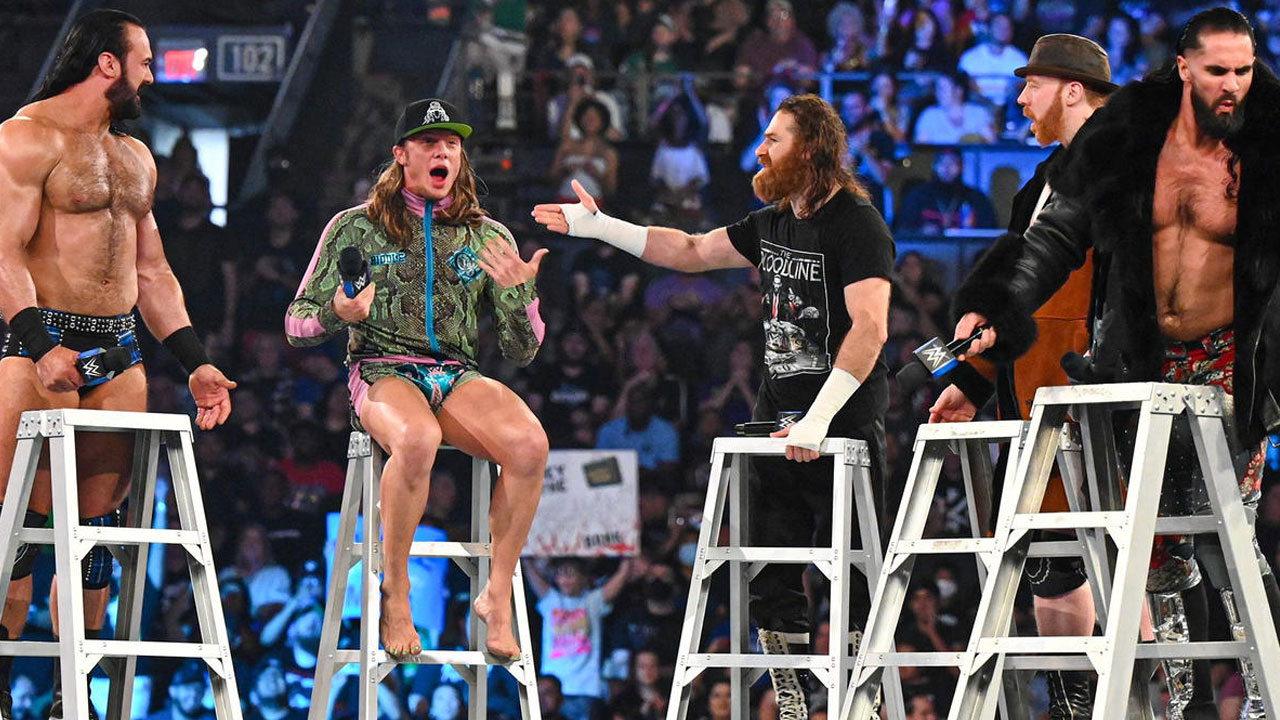 – Tonight is WWE SmackDown, the blue show begins with commentators welcoming us. Participants in the Men’s Money in the Bank Ladder Match are already in scale in the ring, apart from Omos who is standing next to a ladder with MVP.

Seth Rollins speaks first to welcome us to SmackDown. He tells us he can speak for any attendee … is interrupted by Drew McIntyre who doesn’t want Rollins to speak for him. Same for Riddle. Seth Rollins takes the microphone and says that the best place to cash is SummerSlam with the match between Roman Reigns and Brock Lesnar … he has already done it!

Riddle talks about takings on Roman Reigns, but Sami Zayn says it won’t happen! He is in the MITB Ladder Match and will take the briefcase to leave it at the bloodline. As long as he has the briefcase, Roman Reigns will be safe.

MVP says there is a giant in the ring with them and she is the clear favorite. Sheamus remembers that he has already cashed against Roman Reigns. Drew McIntyre stops him and says that he has already beaten Brock Lesnar in 5 minutes and that at Money in the Bank he will beat them all … Miz’s music hits and he takes the stage. He remembers that the last time he got the briefcase, he cashed in McIntyre! It is Ezekiel’s turn to arrive on the scene. He introduces himself and says that he deserves to be the last competitor because he should have played a qualifying match against Kevin Owens.

Happy Corbin arrives and says that no one is as lucky as he is in Vegas. Madcap Moss walks in and tells Happy Corbin that he thought they were done with the lines. He has already failed his cash-in, he will have no chance to do it again. He is there to take the last place.

The wrestlers all start talking at the same time, but Adam Pearce arrives on the scene and announces that a Battle Royal will take place between all the wrestlers who are in the ring.

At the end of the match, Drew McIntyre, Sheamus and Sami Zayn remain. The latter is eliminated by Drew McIntyre then Sheamus tries to eliminate McIntyre but the two fighters find themselves close to the ropes. Happy Corbin appears out of nowhere to take out Drew McIntyre and Sheamus.

– Behind the scenes, Happy Corbin is happy after his victory. Kayla Braxton asks him for his answer to Pat McAfee’s challenge. Corbin doesn’t answer …

– A video about the rivalry between Ronda Rousey and Natalya is shown.

– Backstage, Megan Morant is with Natalya who ensures that she will be the first person to touch Ronda Rousey during Money in the Bank. The only thing Rousey will bring is her 10-month-old baby.

– The New Day enters. Kofi Kingston and Xavier Woods tell us that last week everyone wanted to see Shanky dance. They were having a lot of fun until the Viking Raiders came and ruined everything. They may have gotten serious now … The Viking Raiders step into the ring. Xavier Woods hands his microphone to Ivar who wants to take it, but Woods lets himself go and a fight erupts between the two teams. The Viking Raiders end up gaining the upper hand on New Day.

– Behind the scenes, The Miz, Madcap Moss, Happy Corbin and Ezekiel are with Adam Pearce. The latter says Kevin Owens can’t fight, so all four will be in a Fatal 4-Way tonight and the winner will have last place in the Money in the Bank Ladder Match.

– The wrestlers are in the ring for the next match. Before she rings the bell, Becky Lynch gets to sit at the comment table.

At the end of the match, Liv Morgan made her ObLIVion on Shotzi to give her team the pinfall win.

– After the match, Becky Lynch quickly steps into the ring to do her All Man-Handle Slam on Asuka and hit the pitch!

– Behind the scenes, Sonya Deville joins Adam Pearce. She criticizes her decision last week (to put her in a handicap match). It was a mistake and Sonya Deville slaps him!

– The Usos and the Street Profits are in the ring with Kayla Braxton in the center asking them questions. First question posed to the Usos: how afraid are they of losing the titles and how afraid of Roman Reigns’ reaction in case of defeat? The Usos want to know why he asks if they are afraid. Do they look scared? The Bloodline runs all the shows! Street Profits laugh and say Roman Reigns is directing the show instead. The Usos run a supermarket.

Second question posed to the Street Profits: They have lost their killing instincts and are not getting along after their latest losses in PLE. Street Profits ask you where did you hear it? Probably wrestling sites! They’ve had that killer instinct ever since they’ve been on SmackDown, they’ve had it when they’re with Usos. They respect the legacy of the Usos, but are not prepared for the hungry Street Profits. They will collect their securities from Money in the Bank.

The two teams face off and steal the opposing team’s slogan.

– A video about Gunther is shown.

– Max Dupri is in the ring and introduces us to the first clients of his Maximum Male Models! The first is Club which becomes ma.cé that makes us walk on stage. Now it’s time to introduce the second client: Mansoor which becomes mån.sôör. The latter also introduces himself to fans on stage.

– Backstage, Megan Morant is with Ronda Rousey who tells us that Natalya better learn to count because her baby is 9 months old. She will touch Natalya during Money in the Bank.

– The Maximum Male Models will host the 2022 tennis apparel collection next week at SmackDown.

The winner will be in the Men’s Money in the Bank Ladder Match.

Happy Corbin vs The Miz vs Madcap Moss vs Ezekiel

At the end of the match, Happy Corbin made his End of Days on Ezekiel then wanted to block, but Madcap Moss returned to the ring to send Corbin to the corner, so he took the opportunity to block Ezekiel and win.

– The show ends with commentators reminding us of the participants of the Men’s Money in the Bank Ladder Match and celebrating Madcap Moss, while Pat McAfee mocks Happy Corbin.