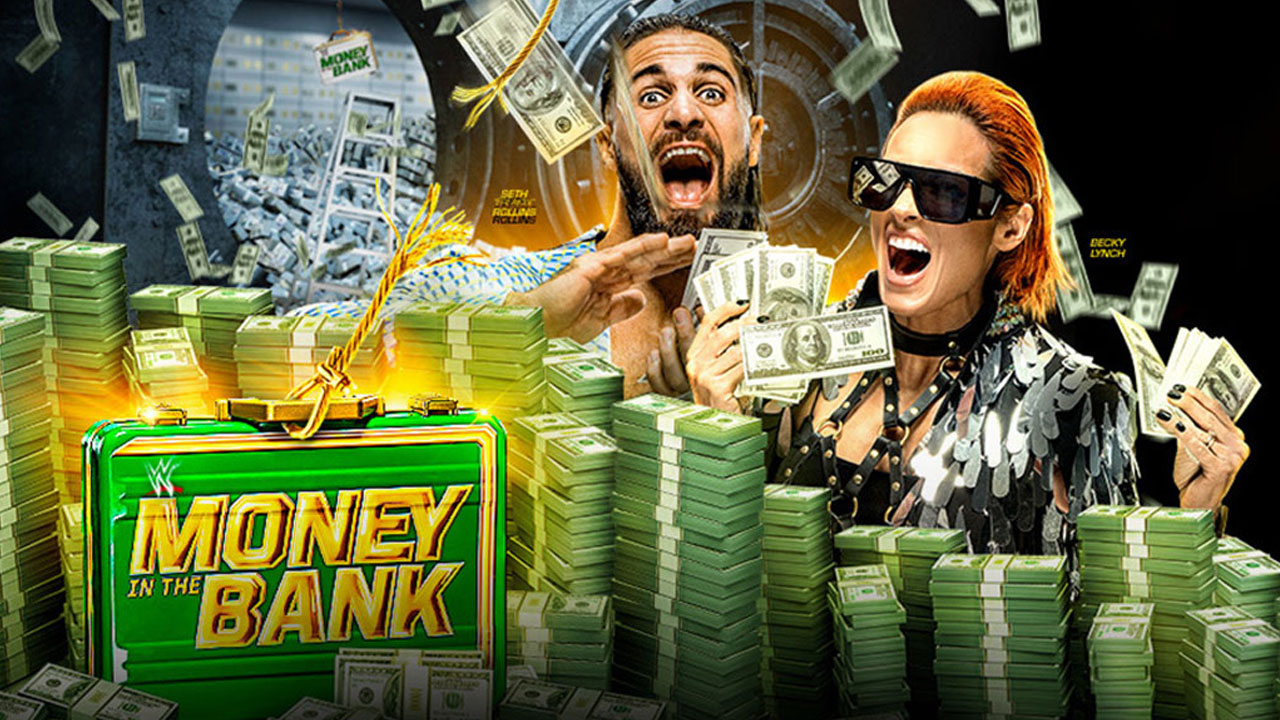 WWE presented its 2022 premium live event “ Money in the Bank ” on Saturday, July 2, live from the MGM Grand Garden Arena in Las Vegas.

– WWE Money in the Bank 2022 pre-show kicks off with the panel of Kayla Braxton, JBL, Peter Rosenberg, Kevin Patrick and Booker T welcoming us. The jury presents the evening menu.

– Street Profits are coming for a segment with the panel. They promise to win tag team titles and celebrate in Las Vegas.

– The Pre-Show ends with the round table discussing the other matches of the evening.

Commentators are Jimmy Smith, Byron Saxton and Corey Graves for RAW. And Michael Cole and Pat McAfee for SmackDown.

– Tonight is WWE MITB, the Premium Live Event begins with the opening video of the show.

Money in the Bank Ladder Match

At the end of the fight, Becky manages to put Asuka on a ladder at the bottom of the ring. Becky climbs another ladder and throws a Leg Drop on Asuka. In the ring, the other wrestlers install themselves and climb three stairs. Becky steps into the ring and pushes down two stairs. Becky climbs the third ladder. Morgan steps into the ring, the two barter on the ladder. Morgan manages to push Becky away with her foot and takes the briefcase.

– We present a video of Cody Rhodes (airing last Monday during RAW) in Atlanta for a doctor’s interview. Cody says it’s rehab: ups and downs. Three weeks ago he was at the peak of his career, he wanted to bring that momentum to Money in the Bank. He was flying very high, perhaps too close to the sun. After the operation they told him nine months. He will look at Money in the Bank with a bad taste in his mouth. We have Omos which is giant and doesn’t need a ladder. There is Sami Zayn and his intelligence in the ring. And we have Seth Rollins, the man with the most box office receipts in the company. It would be crazy if history repeats itself and Seth wins the contract to become champion. But if Seth wins, he will be the first to congratulate him.

– We present a video about the rivalry between Lashley and Theory.

At the end of the fight, Theory takes the stepping stone, but Lashley catches him and hits him with PowerSlam to cover him, but he resists two. Lashey chooses his Dominator, but Theory falls to his feet. Lashley surprises him with a Roll Up, but he resists. Theory pushes Lashley back into the corner and Drop Kicks to cover him, but he resists two. Theory mistakes him for his ATL, but Lashley knocks him down with a Roll Up and he resists. Lashley takes it for his finishing move, but Theory puts a finger in his eye. The theory continues with a Spear and takes him on the shoulders, but Lashley overturns him in Hurt Lock and hits!

– Behind the scenes is Sarah Liv Morgan for his reaction to his victory. Morgan says the contract gives her the ability to cash it out when she wants within the next year, the possibilities are endless. She doesn’t want to waste her only chance, she wants the title more than anything else. She just wants to celebrate tonight.

– We present a video about the history between Belair and Carmella.

At the end of the fight, Carmella enjoys slapping Belair, but Belair gets frustrated and knocks her out for the tally of three.

– After the fight, Belair celebrates on the corner, but Carmella pulls her down and starts punching her. Carmella then leaves the ring, happy.

– We feature a video of Logan Paul’s signing at WWE. The Miz will reply to Logan Paul on Monday on RAW.

– Backstage, Alexa Bliss walked into her dressing room today. Bliss asks Lilly why she has so many dresses. Lilly replies that she bought everything with her WWE credit card.

– The Usos arrive in the ring. Jimmy Uso takes the microphone and says they feel lucky. They want to bet on Bloodlines for tonight.

At the end of the fight, the Street Profits do their Neck Breaker two from the corner on Jey to cover him, but he holds out two. Dawkins and Jey chain shots. Dawkins wants to do another double take, but Jimmy steps in and pushes him away. Usos Ford and Jimmy’s double superkick covers him, but he resists. Jey takes the tag to prepare for a hold, but Ford pushes the Usos back into the ring. Ford launches into Swanton on the two at the bottom of the ring. Dawkins takes the label. If Spinebusters Jey, Ford follows up with a Frog Splash to cover it, but Jimmy breaks the bill! The two teams get up and exchange blows at four. Then the Usos do a Double Superkick on Ford and do their 3D for the count of three.

– After the fight, we see a recovery that Ford had his shoulder raised during the count of three. Which leaves the door open for a rematch.

– We feature a teasing video of a man walking into a place with candles. You can see the mention “ latin heat ” on a plate, boots and a medal.

At the end of the fight, Rousey applies a sniper on Natalya, Natalya manages to repel her. Rousey knocks her down and knocks her over for an Arm Bar, but Natalya knocks her back into the ring. Natalya takes her back to her apron to apply a sniper. Rousey pushes her back against the pole to stop her. Natalya manages to get back into the ring at nine. Rousey mistakes her for her goal, but she doesn’t get there. Natalya takes the opportunity to subdue her, but Rousey transforms her into Ankle Lock. Natalya resists, but Rousey follows her with an Arm Bar to knock her out.

– After the fight, Liv Morgan’s music starts and she arrives in the ring with her briefcase! Morgan collects the suitcase!

Morgan accuses Rousey, but she locks him in the ankle! Morgan pushes her away and rolls her for the count of three!

– After the fight, Rousey puts the belt back on Morgan and the two embrace. Morgan celebrates the victory.

– The wrestlers arrive for the main event. Adam Pearce comes in and says the night in Vegas is great. But what’s better than adding someone to it. So he adds a new participant, Theory!

Money in the Bank Ladder Match

At the end of the fight, Riddle climbs a ladder and does his Floating Bro on all the wrestlers. Omos returns to the ring and kills everyone. Omos wants to climb a ladder, but Riddle jumps on his back. Omos pushes him away, meanwhile Theory climbs the ladder. Omos sees Theory and grabs it to do a double-handed ChokeSlam. Omos was about to go up, but Sheamus gives him a Brogue Kick. Zayn continues with his Helluva Kick on Omos. Riddle applies an Arm Bar to Omos to knock him out of the ring. McIntyre does his Headbutt in Omos, Rollins continues with his Stomp. The wrestlers decide to help each other at Powerbomb Omos through the comment table! All the wrestlers start fighting again. Zayn takes the opportunity to climb the ladder, but McIntyre will stop him and throw him on the ladder. Then McIntyre pinches Sheamus under the ladder and goes upstairs, but Butch walks over and jumps on his back. Butch sleeps McIntyre to get him off the ladder and Sheamus Brogue kicks him. Sheamus nails McIntyre under the ladder and climbs, but McIntyre pushes the ladder down to make her fall. McIntyre Claymore Butch. McIntyre climbs the ladder, but Sheamus climbs with him. Zayn pushes the ladder to make the two fall. Zayn climbs the ladder, but Moss comes and pushes him! Rollins pushes Moss down the ladder and steps on him. Rollins goes up, but Riddle hits him with the ladder. The two face off on their ladder, Rollins knocks him over, but Riddle gets back up and Super-RKO him! Riddle goes up, but Theory also gets up and goes up. Theory punches him and pushes him to the ground to get the briefcase!

– MITB 2022 ends with a celebration of Theory taking selfies.