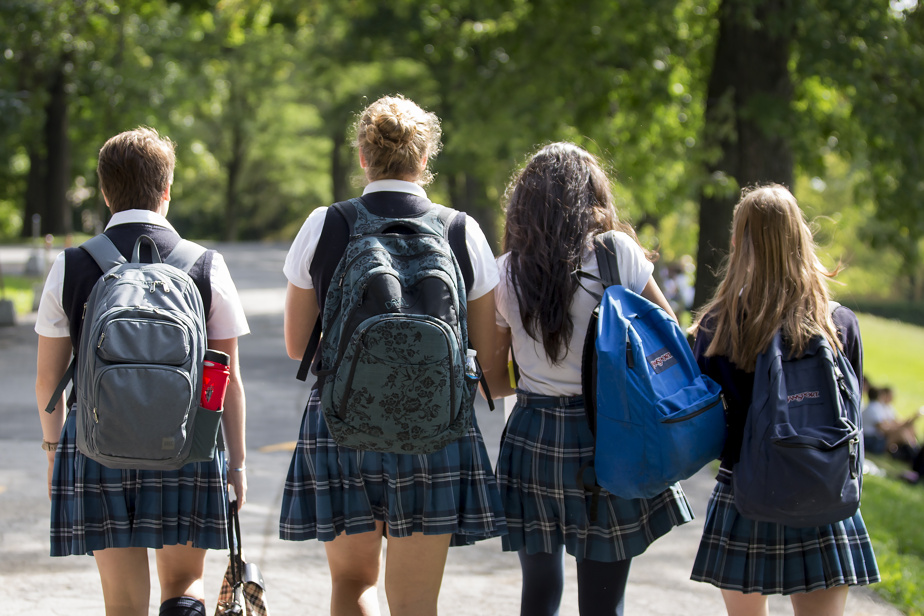 In England there is a petition launched by college students to abolish the use of lingerie that looks like schoolgirl clothes in the sex industry. One of the goals: to make the streets safer for young people in uniform. A question that also concerns the stakeholders here.

Sarah Maile, professor and representative of the movement, is determined to make the issue reach the ears of the government and make society think. “The heartbreaking thing is that we have girls aged 14, 15, 16 and 17 who say to their government, ‘Can you please stop our society from sexualizing our school uniform?’ sums up what we joined in England.

“Our young people do not feel safe in their movements because we have trivialized the sexualization of this costume, and this is where I find it problematic,” explains Cathie Gaudreault, a sexologist and worker at Regina Assumpta College. .

“Many young people choose to take off their skirts to take public transport. Many shorten it at school, out of a question of gaze, of presupposition, of trust. But once they’re out, they undo the turns of the skirt to have it as long as possible, “he observes.

“We agree that it is socially unacceptable to eroticize a child, but this is what happens when we eroticize the image of the schoolgirl,” admits Véronique Jodoin, a sex therapist and psychotherapist.

This schoolgirl fantasy has been carried on in our society for a long time, and among the girls who walk the street, there are some who will feel observed, or hypersexualized, due to their uniform.

Cathie Gaudreault no longer counts the number of examples of aggressive comments, indecent proposals and inappropriate gestures associated with wearing a schoolgirl skirt that has been entrusted to her. “Yes, they touch, even the hands on the thighs, under the skirt, in the middle of the subway, in the middle of the bus”, denounces the sexologist who works every day with young people in uniform.

“How can we live in situations where our society seems to tolerate these behaviors? », Indignant Sarah Maile.

Véronique Amato argues, however, that the universe of fetishism is “broad and vast”. A person can therefore be sexually aroused by a sexy schoolgirl costume without being attracted to little ones. Therefore, she compares the different sexual role-playing games, noting that all parties are of legal age and consenting.

“We feel it [les scénarios qui mettent de l’avant ce type de costume] they are less fashionable now, but it was something that was fashionable a few years ago, a bit like babysitters, ”notes Nicola Lafleur, owner of Quebec Productions Pegas’ pornographic film production company, who wouldn’t mind eliminating this practice.

However, according to Cathie Gaudreault, the parallel between sexualization and adolescence remains dubious.

We must distinguish between sexuality, fantasies, fetishes. Everything is possible. We all know, sexualities are all the same, but when it comes to compromising our integrity as a child or teenager, I find it questionable.

M.myself Gaudreault hopes that the company will take the time to question and review its positions, going so far as to “clean up” the supply of Halloween costumes with sexual connotations. “I know many pupils who would be happy to launch a petition like the one in England to stop this kind of use of the schoolgirl image; so that they have the right to be students without being sexy students. ”