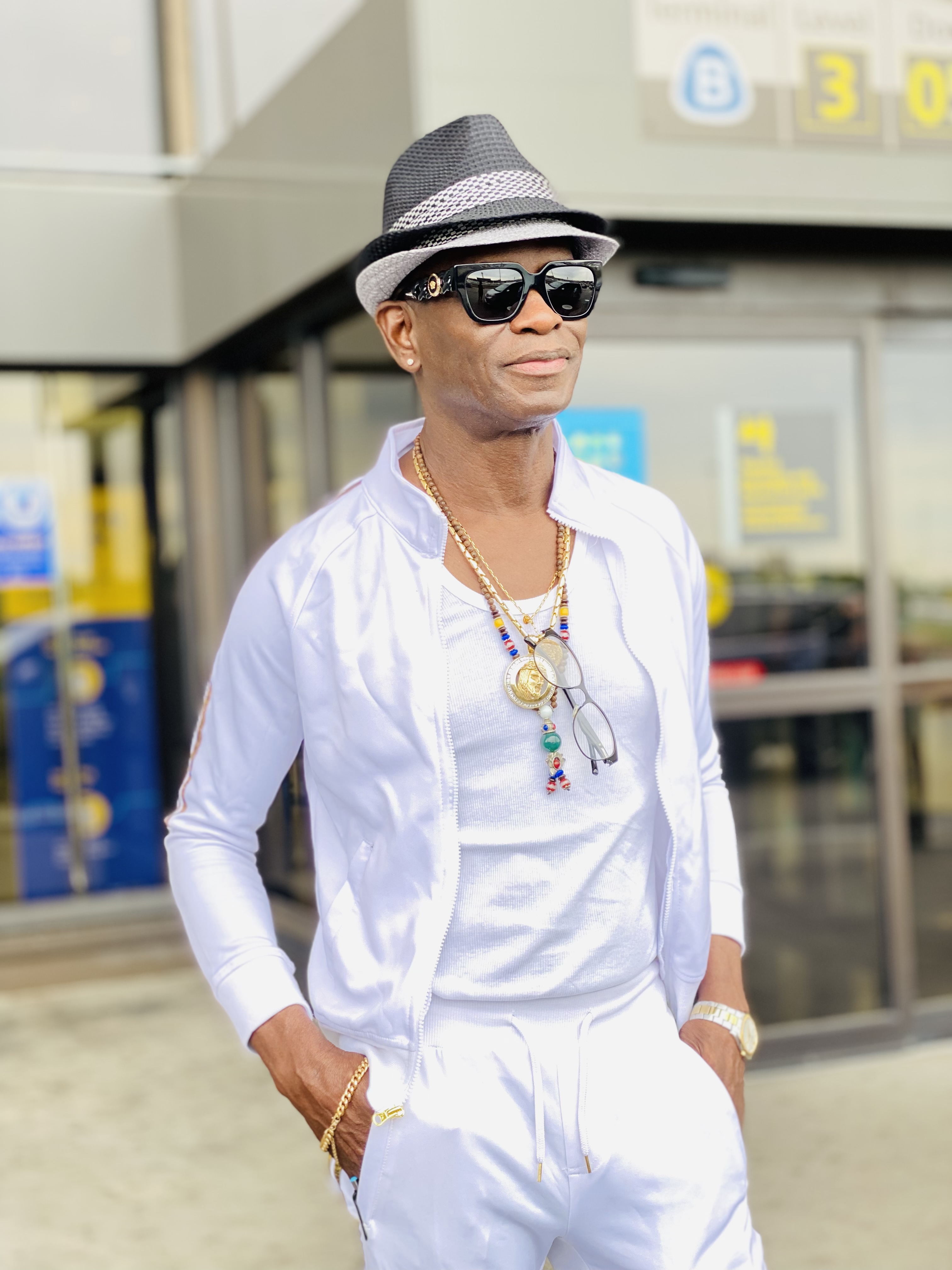 Her name is Dieudonne Larose. For many it will remain the voice of “Mandela”, “Accident”, or even “Joli minou”. This music was brought by an orchestra that was not in competition with anyone and could become absolute hits.

Those who weren’t humming “Mandela”, “Accident” or “Joli minou” in the 1990s were not in Haiti or the diaspora. Those who weren’t cringing when Larose performed them again and the part of the audience that was old enough to continue to enjoy these loudly sung hits were not music lovers.

From Shoogar Combo to Larose and Missile 727, passing through DP Express and Méridional de Montréal to culminate in his current solo career, Larose is also 43 years of professional career, 31 albums and dozens of songs waiting to be released. Portrait of a singer with a unique tone of voice who lives on music and… love.

It’s almost noon when we meet Dieudonné Larose at Newark, New Jersey airport for this interview. The meeting with a 77-year-old gentleman will not take place. The person at the meeting point is thin, straight, smiling. If he has white hair, he is barely noticeable. Larose looks thirty years younger than his age. His voice is composed and calm, another surprise for those who know how to inflame the crowds with his particular way of singing. However, he says he is shy. So there is a Larose on stage and another in private.

On this Saturday in late spring, the artist is preparing to fly to Europe where he will have to hold concerts and start negotiations for the eventual launch of his own clothing brand. But she is at the airport more than six hours early. What a surprise !

“I am very punctual, I always arrive well in advance, imagine my torment when I was in the bands! The musicians give you an appointment at 10, they arrive at noon ”, I hear him say on the phone to his interlocutor who is surprised to be already at the still closed counter of the airline.

As he finishes his call to focus on our date, we have enough time to scrutinize this gentleman who just celebrated his 77th birthday. He was born on June 5, 1945, he confirms. With this streetwear look showing off in this white jumpsuit consisting of an open zipped jacket over a white shirt on which his slightly extravagant jewelry rests, he doesn’t seem to be the age of him. He can say that he keeps his shape thanks to a simple diet, a philosophy of life where love of neighbor reigns supreme, natural juices of which he has the secret, one is perplexed!

Larose, this Larose we love so much, is he really 77 years old? The mystery of his eternal youth will remain a secret. “People might not believe it, but that’s enough,” he says, too proud to lose a single tooth at his age.

Born in Port-au-Prince, Dieudonné Larose shared his childhood between the capital and the city of Cabaret. His mother Marie Thérèse Josaphat is a true lover of music. “He danced all the rhythms and all the styles”, remembers Larose, nostalgic for the lullabies she sang to him. His father, Jean Larose, is a voodoo priest. Between Fabre Nicolas Geffrard High School and Toussaint Louverture High School, he completed primary and secondary classes up to rhéto. Subsequently, he continues his professional studies. “Life wasn’t too easy for us,” he recalls, as if he suddenly realizes how far he’s come. Indeed, for this singer, composer, drummer, everything was not written in advance.

Dieudonné Larose is above all self-taught. A man who by force of observation and practice has managed to pierce the mechanics of things. With the fervor of those who know they have no choice but to live, the young Dieudonné has rolled his belly everywhere. “With us there is so little supervision, you have to touch 50 things to hope you can feed on the fruits of one. He played football, he learned karate which at one point he also taught, he assisted his father pastry chef at the famous Boulangerie Saint-Marc. He still loves to cook today. “I was very smart. As soon as I saw someone do something, I realized that I could too if I put my mind to it. So far I am learning, doing personal research. If you go to school and neglect your homework, it’s a waste of time. Education comes first of all from oneself, “suggests those who currently study sound.

Sewing, she learned it at the age of 15 after a disappointment with a tailor. “I remember asking him to make me some clothes to go to a party. When I went to collect my dress on the agreed day, he told me he hadn’t had time to start. I remember crying. Since then I have decided to learn to sew “. Years later, he perfected his craft and to this day he sews his stage costumes. “I always want to be different. When you are on stage, it is important to shine. Sometimes you can’t find this glitter in stores, it’s up to you to create it, “says Dieudonné Larose, an artist to the core.

“I grew up in a musical universe. I can’t tell you when I started singing, se wè mm wè m pran mikwo an ”, explains the man who started his amateur career on stages of which he has only vague memories. He remembers that the “Lovers of Literature” troupe, to which the singer Barbara Guillaume introduced it, recalls this beautiful era of Haitian theater when we played Pèlen Tèt, Ti Sentaniz. He has evolved within small groups such as Las Mariachis, Compas Express, Africa Express or Friends Connection. But the trigger only occurs with Shoogar Combo seeing him during a performance with the Friends Connection group in Pétion-Ville. For him, it was with the Shoogar Combo that his career as a professional singer began. He used to have fun.

Place St-Pierre is where it all began, says Larose, who in 1982 joined this team of already professional musicians who provided him with the support he needed. Three months later, he starts touring with this group in Haiti and abroad. An enriching experience that allows him to acquire maturity. The band disbanded after three years. With Shoogar Combo, Dieudonné Larose can be found on nearly five albums, including some hit songs like “Manman”. “It was my first song, my first success, I composed it with Adrien Dupuy”, says Dieudonné Larose.

Then we find Dieudonné Larose in DP Express, one of the most followed bands of the 80s. An experience that he describes as moving, extraordinary. But again, it will only be for a short time. 1986 marks the end of Duvalier’s reign. With the political crisis, it is very difficult to keep making music. He left on July 17, 1987 for Canada. “It is a date that has marked me a lot. I didn’t want to leave. But the circumstances of life forced me to do it. The country had become unlivable. And I already had a wife and three children, not to mention my mother and other members of my family. I didn’t go for me. I was famous, I could have done it myself, but I did it for my family. I arrived alone in Canada. I didn’t have anyone except Larose… “.

In Canada, Larose told himself he would only care about his work and studies. Yet the call of music was not long in coming. And of course he can’t resist. He takes back the microphone making a short passage inside the Dixie Band, concludes an agreement with Méridional de Montréal that will lead to “Larose and Missile 727”. But once again, the collective adventure doesn’t last. The group collapsed in 1991 after an international tour. There was a problem between the management of the band and the musicians. They put it on my account. But the truth is that the musicians wanted to change management. When they talked to the owner, he explained to them that if he broke the contract, the musicians would have to agree to honor the contract he had with me by keeping me. And that’s when they decided “if you had a contract with Larose, keep it, we’ll do something else”. So the story ended. It was ignorance, lack of maturity, “he said with a note of regret in his voice, believing that things could have been resolved differently.

Although the artist’s repertoire focuses on personal stories, Dieudonné Larose’s voice has brought about many social causes and demands, of a national or universal nature. The fate of the braceros in the Dominican Republic, slavery, world war. “I am a responsible singer. Not busy, but responsible. An artist must be impartial to talk about the problems of his country about him and those who live there ”, he confides this messenger that he says he has a clear conscience now, believing that he has spread enough messages to awaken our conscience.

Twenty-six children with 12 mothers, this is the size of the Larose family. But it’s the opposite that would have been surprising since making music and making love tops his list of his favorite activities. “If I had taken it seriously, I could have had a thousand children,” she says, half serious and half amused. He actually loves children, and women, and the latter gladly give it back to him. “I am a beloved man. It is not a question of money, I am naturally loved. Certainly we can refuse certain reports, but dèfwa lè w refize, yo pral ba ww non pote wi, fò w fè atansyon ”, jokes this 77-year-old man, who neither smokes nor drinks, keeping an eye on him. and about life.