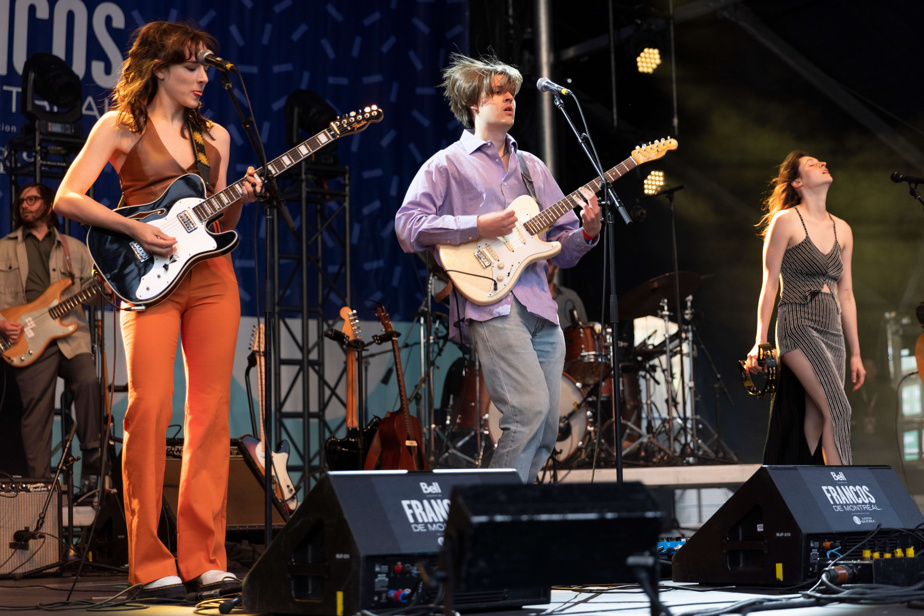 “We don’t know if we will have another opportunity like this! “Launched Ariane Roy. “I’m thrilled, added Lou-Adriane Cassidy. We love making music together! “The inevitable happened.

Cool weather and raindrops wouldn’t stop a queen from dominating, a rose from blooming, and a wolf from howling.

And a crowd to watch a show that will mark the spirits. A show that brought together three of the most talented and inspired songwriters of their generation: Ariane Roy, Thierry Larose and Lou-Adriane Cassidy.

The title of the show, The king, the rose and the lou (p)it was a nod to two event concerts that used the same concept, viz I saw the wolf, the fox, the lionwhich in 1974 brought together Félix Leclerc, Gilles Vigneault and Robert Charlebois, as well as The wind, the sea and the rock, which featured three hour stars at Francos in 2003, Daniel Boucher, Éric Lapointe and Kevin Parent. All men (including two whose reputations are no longer very enviable) …

Thankfully, (re) welcome to 2022, where it would be inconceivable that a top musical meeting didn’t include any women.

Especially when their names are Ariane Roy and Lou-Adriane Cassidy.

Fluttering hair and outfits somewhere between grunge and disco, what a fiery look and presence they had on the Clark Street stage, while they were alongside their friend and third headliner of the evening, Thierry Larose, who had received the award for the song Félix-Leclerc at the beginning of the evening.

We were in the front row, and what an excitement radiated from the stage! The girls had their hair in the wind, Thierry Larose closed his eyes to believe if all this was true.

Time slowed down when they performed in three voices and three guitars what is perhaps the most beautiful French ballad of the last decade, Twenty Five Penny Island by Thierry Larose. Nice to cry.

Longtime friends, Ariane Roy, Thierry Larose and Lou-Adriane Cassidy have already shared the stage together long before the idea of ​​the show The king, the rose and the lou (p). They like each other as much as they admire each other, they told the crowd.

They are three expert instrumentalists, but the chemistry between them has also given them a lot of ease and ease as interpreters on Saturday evenings at the Francos. You were supposed to see Lou-Adriane Cassidy give it all on the very “Hole” version of him.Between my legs.

Or see her perform with Ariane Roy – they’ve known each other since the age of 9 – the song Girl to wear.

Otherwise, we still have goosebumps thinking back to when Thierry Larose gave the cue for the first notes of his pop home run every time, Lovers of Pompeii.

To complete the enviable trio of headliners, we found on stage Charles-Antoine Olivier and Pierre-Emmanuel Beaudoin on drums, Sam Beaulé on bass, Dominique Plante on guitar, as well as Vincent Gagnon and Odile Marmet-Rochefort on keyboards.

The title of musical director of the show went to the one who collaborates with “the king, the rose and the wolf”, namely Alexandre Martel (Anatole). Hats off to all his work.

The show, which was attended by many teenagers, had something to reassure us about the future of French song.

Ariane Roy, Thierry Larose and Lou-Adriane Cassidy embody a generation of inspired, talented, but above all uninhibited musicians.

To close the show before the unexpected and improvised encore (we could hear in the distance as we went out Between Matane and Baton Rouge by Isabelle Boulay), the trio of the evening had invited – against all odds – Gilles Valiquette to interpret his great success with him Life in pink. A nice sign of respect for the great Quebec pop of the past.

Ariane Roy, Thierry Larose and Lou-Adriane Cassidy showed class and enthusiasm. It was an opportunity to attend their show which could have taken place on the big stage and which will remain in the annals of Franco.